When I'm a big shot in Hollywood... 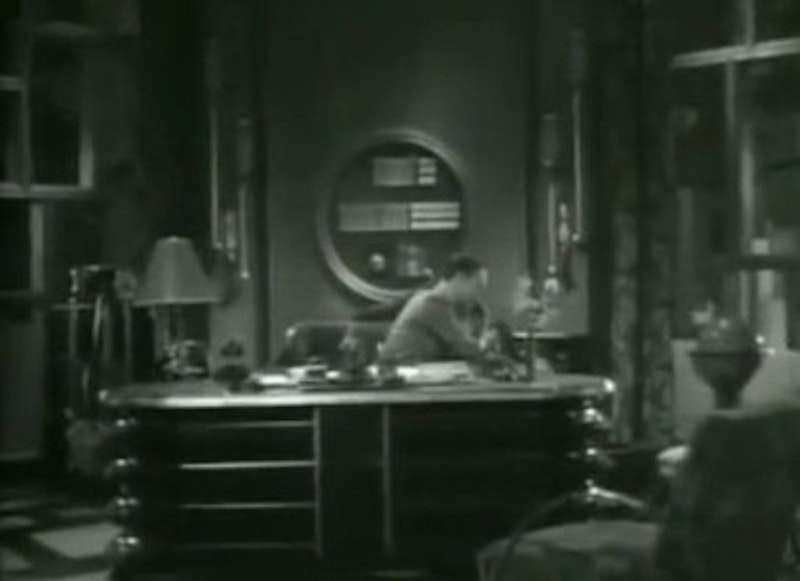 People who choose art over money can age into a somewhat forlorn preoccupation with success and its trappings. So it is with me. I live in a one-room apartment and eat out, if I do, at a neighborhood restaurant that serves a plateful of Chinese food at $10 or less. The life is okay, basically. There's not much I'd do with money or fame if I had them. Even so, I dream.

My ideal isn't to win the Pulitzer Prize or the Booker. It's to be the executive producer of a TV drama on cable. Maybe they'll adapt my novel, if I ever finish it. If they do, I could be a spry, silver-haired 60-year-old (because this is a few years off) tucked into a small but handsome office with a dry board behind my desk and much blond wood in evidence. A team of pros would put out the show, and I'd dash their scripts through my laptop to make sure they had the touch.

But no more than the touch. I would spend most of my time deferring. “You boys know the score,” I'd say to the pros, waggishly including any women on the team. “You know how this enterprise is going to happen. I just tapped on a keyboard a few years ago. Now we add water, and you guys are the fountain.” They show me production sketches. “Love it,” I say. “Love them all.” My finger darts. “Okay, maybe this one. That's her. That's got the look.”

Who is “her”? To tell the truth, I haven't filled that in. Taking my years-long burden of a novel and messing with it some more, now in Hollywood, isn't something my mind wants to dwell on. I just like the status, the affection that will surround me, the easy and universal recognition that I'm important. I'll gently edge my way into a room and find a seat. “What's the discussion?” I'll ask. “Maybe I can learn something.” And the discussion will flow my way; people will want to make sure I know they're on my side. But I won't take advantage of this. I'll keep my mouth shut and my eyes alert. “Thanks,” I'll say when everyone is done talking. “Okay, I don't quite know where you guys are heading. But I get the feeling that you do. That's what counts.” When I'm done for the day, I stroll home to the apartment I keep in LA. I can't drive and I don't want a driver. No mansion, no big car, no fuss. I'm like that, and the media and the guys in the business can make of it what they will.

My personal assistant will be a young fellow named Terry, perhaps just out of college. I'll apologize to him when he starts work. “We're kind of on the sidelines, you and me,” I'll tell him. “Working for me isn't the front lines—Ron and Barry and Riva and Ari really carry the ball. But it's a start and you can tell me when I'm goofing off. Just listen for prolonged silences from the keyboard.”

Terry will sit at his station, swan-necked and with luxuriant eyelashes, his hair lemon-blond and his profile elegant. He will look a great deal like the boy I saw at the legal clinic of my local university when I visited because of my damn landlord. The boy was a beauty, a head-turner, and so is Terry. “If he were a girl, I couldn't concentrate,” I joke to visitors, though only when he's out of earshot—I want to be respectful. Sometimes he has a date stop by before they go stepping. I emerge from my office and size up my guy's new fella. The lean-bodied Israeli technician strikes me as smoldering but a user, somebody who’ll take what he wants and move on. I like the floppy-haired medical student from down South, with his quick smile and gentle handshake. I don't know what to make of the 40ish telecom executive. He's fit, of course, because Terry has his standards, but there's gray at his temples and he wears a suit. I don't like it when he puts an arm on Terry's elbow, and even less when Terry smiles in return. Jealous? Ah well, human nature is a funny thing.

“Bye, fellas,” I say as Terry and the executive (or technician or law student or yoga teacher or high-end clothing store clerk) head off for their night on the town. I look at the blond wood and glittering windows. Outside lie traffic and eroded-looking green hills and a blue sky that is starting to darken. Riva passes the open door of my office's anteroom. “Hey there,” I say. “Still busy?” She says, “You know it!” and gives me a smile, but she doesn't slow down. I could invite myself to whatever meeting she's bound for, but I don't want to talk about what sort of pants Eppinger should have on for the scene where he stubs his toe, or whether we should beef up Len's problems with Janey so the big reveal later on will be more justified. I'm sick of my novel, in whatever form it takes. Is this my life?

I think about my percentage from paid downloads in Great Britain and I feel better.

“Night, Dipo,” I say to the Nigerian security guard. He pushes back his cap as I make my way through the parking lot to the studio gate. Like everyone, he's bemused by my insistence on walking. But he knows me as a good sort and he breaks into a grin.

In my apartment I look at YouTube clips for a few minutes and get bored. I open the cartons of Chinese takeout and glimpse the backs of my hands: corrugated, knobby and veined. There is no one in the apartment with me, and I don't know my neighbors. I think about calling an escort, because I'm rich, but I'd have to apologize for my body and I worry about what the neighbors would think when she comes clacking down the hallway.

My thoughts land on Terry. Somewhere he and his fellow, whichever fellow, are smiling for the reasons that people smile when they have lives to lead. Tomorrow I'll ask how things went, and Terry will grin bashfully and duck his head and tell me a bit, nothing that's not my business. He won't ask me about my evening. He's a polite fellow, even gracious. But there was no point and now he's stopped.

“I don't ask for much,” I say to my apartment. I feel like that's something to be proud of. Unfortunately, I don't feel proud. Mentally I count up the decades that have gone by and the years I have left—it's a bad habit but one I can't quit. Then I go to bed.