And how I tried to help. 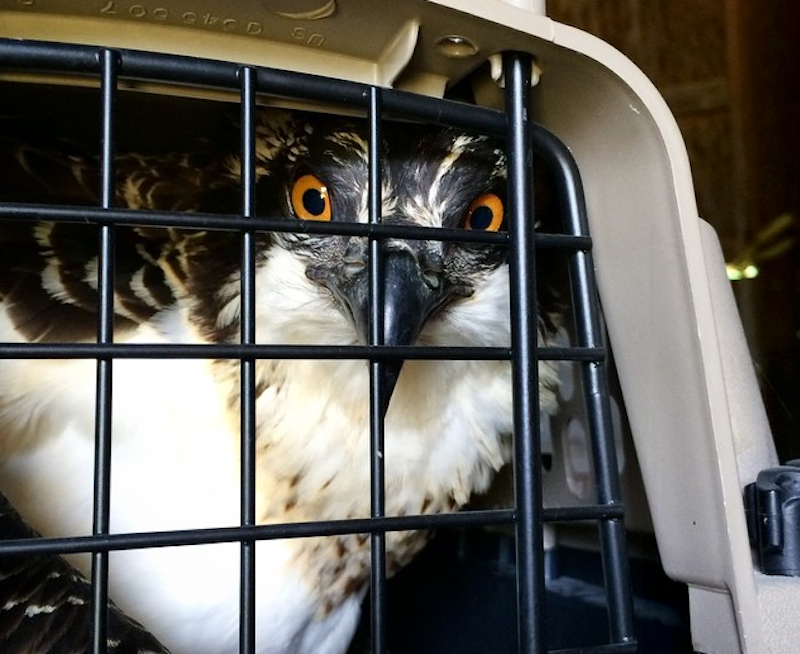 During my past year living on the Chesapeake I've spent a lot of time kayaking. A kayak is smaller and quieter than any other boat, a perfect vessel for wildlife exploration. After constantly reading about the pollution in the Bay, it's refreshing to see animals and birds thriving.

After a particularly stressful day at work on Saturday I launched my kayak and began aimlessly paddling. There was little wind and a strong current that I knew would make getting home difficult. I went by the narrows, Back Creek, and the beach where my mom and I find seaglass. Finally I reached the marshy point that marks the beginning of Front Creek. I noticed a brown and white animal in the grass which, without my glasses, I thought was a beaver. I crept up next to it to get a better look and realized it was an osprey. As I approached him I noticed he wasn't making much of an effort to threaten me or flee. I inched closer. He extended his wings, clumsily flapped them and fell into the water. Bobbing up and down helplessly he hardly looked like a fearsome bird of prey. Wake from a passing boat threw him back on to the marsh where he sat up, no longer trying to scare me. The wet feathers on his head stuck straight up, one wing hung lower than the other. In his bright orange eyes was a look of defeat.

I knew I had to save this bird. There was a local environmental center about a mile away. I turned my boat around and paddled back to the seaglass beach. Along with beautifully tumbled shards of vintage glass, the eroding beach is strewn with decades of washed up trash. I knew that waterman's gloves often drifted ashore and it didn't take long to find a blue rubber finger poking out of the sand. I pulled it up to find it had four functional fingers. Osprey have impressively sharp talons, capable of swiftly killing fish or removing fingers. This glove was mostly a confidence-booster. Next I searched for a worthy container, and settled on a large blue Ikea bag. It wasn't flimsy plastic and had plenty of small holes to allow him to breathe. Lastly I located an old rag to handle the bird and tie the bag off with. I hopped back in my kayak and started back, my heart pounding.

I came near the marsh and considered different angles at which I could try to capture him. After a few minutes of debate I decided that the best approach was a hasty one. I pulled the boat halfway onto the marsh and put on my sad-looking glove. The bird extended its wings once again, looking much bigger than it had from the water. I let him tire himself out and opened the bag in front of him. With my gloved hand I gave him a push until he hopped in and I quickly scooped him up, tied the top of the bag, and put him in the trunk of my kayak. I carefully got back in and started for the environmental center. The current was strong against my boat, but my adrenaline hastened the trip. Ozzy, as I named him, quietly shuffled in his bag as he situated himself. I checked on him every few minutes, leaving an opening just large enough to see one of his big orange eyes.

When I arrived, the volunteer gingerly informed me that she wasn't able to handle birds. I held up my glove and told her that I wasn't either. She called the DNR office, which she told me was closed. I gave her my number and asked that she inform me if she found anyone that could take him. Annoyed, I got back in the kayak and headed home. I kept Ozzy covered which calmed him down until I was able to put him in a newpaper-lined rowboat behind my house. I put some potential food items near him, none of which he seemed interested in.

As the sun set, he settled into the makeshift towel-nest I made him and fell asleep. Finally I heard from my friend at the environmental center who gave me the phone number of a local falconer and bird rescuer. He agreed to pick the osprey up that night, and assessed him as an uninjured yearling who left the nest too early. I was thrilled. A day passed, and though he hadn't eaten he seemed to be doing well. On Monday I saw him again for a bittersweet goodbye. He was to be taken to Tri-State Bird Rescue for rehabilitation and eventual release. Though Ozzy and I were briefly acquainted, I'd grown to love him and was glad he would receive the medical care he needed.

That evening I got a phone call informing me that Ozzy had a severely fractured shoulder and was likely hit by a boat. He died shortly after arriving at the rescue center. Had he survived, his wing would have been partially amputated and he never would have flown or been reintroduced to the wild. My heart broke. I cursed the boater who didn't notice the beautiful bird whose life he ruined. In retrospect, I'm happy to have given Ozzy so much love in the last few days of his life. Had I left him in the marsh he would've met a far more gruesome fate. After a long moment of silence, I thanked the falconer for caring for the bird. He told me we'd done the best we could and promptly changed the subject. He asked if I had a job. I told him that I was employed but looking for work elsewhere, and he informed me of an opening on a sailing charter. I happened to know the captain and he gave me the job as soon as I called. I'll be first mate on a classic sailboat starting next week. I'm still heartbroken about Ozzy, but he led me to an unparalleled opportunity to be on the water every day. I'll appreciate it even more for his sake.