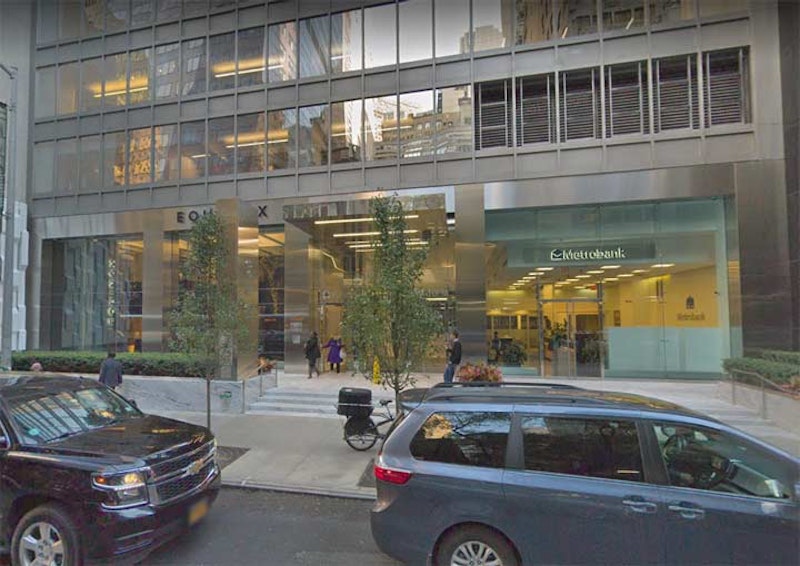 10 East 53rd Street just off 5th Avenue is a place that looms large in my personal history. In 2003 it was the home of HarperCollins Publishing, the company that released my first book, Forgotten New York. In the book, I discuss 650 little-known aspects of New York City infrastructure by borough in alphabetical order, Bronx first and Staten Island last. I took every photo in the book using a Canon Sure Shot 115u, employing black and white 35mm film, and wrote every word.

In early 2003 I got an email completely out of the blue from a man named Matthew Benjamin, an editor at HarperCollins. I had been updating my website Forgotten New York for a scant four years at the time; it will turn 20 in 2019. At the time, I had no thought of turning FNY into a book, though it had certainly been an ambition of mine to write one someday. Benjamin wanted to know if I was indeed interested in writing a book based on the website, and it took about three seconds for me to email him back with a positive response. He asked me to send him two samples and a rough index, and after about a month, he came back with the good news that Forgotten New York would be a book, if I wanted it to be.

This was an unusual stroke of luck, for me especially—I’m generally unlucky. I signed a contract with HarperCollins, after letting my attorney Rochelle see it, and I was told that the book would appear within a couple of years, provided I met my deadlines; I would be paid half the offered amount (which I quickly agreed to) at signing, the other half upon release.

HarperCollins, the publisher, was formed in 1990 after Rupert Murdoch’s News Corp. acquired Harper & Row in 1987 and the British firm William Collins, Sons in 1990, combining them. However, both publishers had lengthy histories; Harper was founded by James and John Harper in 1817, with brothers Joseph and Fletcher joining them in the 1820s. The company combined with Row, Peterson in 1962, remaining Harper & Row until the merger with Collins, which itself was founded in 1819. Forgotten New York came out on the shortlived Collins imprint.

Thus, I made frequent visits to 10 East 53rd Street between 2003 and 2006, when the book came out. I would email chapters to Matthew Benjamin for review, and we would meet periodically to discuss the progress, though most of his edits amounted to taking a blue pencil and excising sections; without such edits my book would have likely been over 600 pages instead of the 350 it wound up coming to. I can remember getting off the train, getting a Sabrett dirty water hot dog at the corner of 5th and 53rd, and eating it while sitting on the steps of a side entrance of St. Thomas Anglican Church, ruminating on my rare good fortune.

But even before 2003, I was no stranger to 10 East 53rd. For twenty years I was a patron of a very special store located on the ground floor, where the Metrobank is located these days. This was the home of the Rand McNally maps retail store. Here, I purchased dozens of out-of-town street maps, as well as NYC street maps, that are still in my collection. The 1970s and '80s were a far different time from now, when just about any map you need from any age can be found on the Internet. In that era, map collectors had to ferret them out. Rand McNally carried maps from other publishers beside its own (unlike the Hagstrom retail store on West 43rd just off 6th Avenue, which also saw my presence fairly often). When I began visiting the HarperCollins offices, Matthew informed me that the Rand McNally store had closed down relatively recently.

In 2014 HarperCollins moved out of 10 East 53rd in favor of a downtown location at 195 Broadway. I’m not in contact with Benjamin anymore; he moved on to Workman Publishing and later, Simon and Shuster. Gretchen Crary, who was assigned to publicizing Forgotten New York, snagged me a cover story in Time Out New York, a radio slot on WNYC with Brian Lehrer (the day of my appearance saw Forgotten New York briefly hit the Amazon Top 500), and several personal appearances at various bookstores and venues around town. The book has sold steadily over the years, though it was not a best seller (I’m proud it spent a couple of weeks at #1 on the bestseller list at the now-vanished Book Court in Cobble Hill) and no subsequent offer from HarperCollins to do another one has ever come. In 2013, I co-authored my second book, Forgotten Queens, with the Greater Astoria Historical Society, for Arcadia. 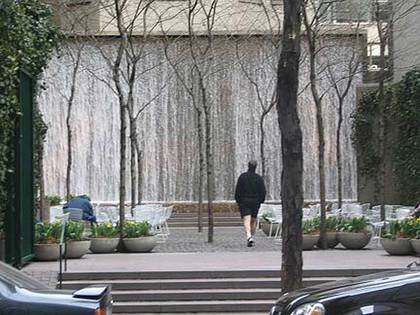 East 53rd is an interesting Midtown stretch. Directly across the street from #10 is Paley Park, a curious open plaza with a mechanically-controlled waterfall at the rear and ivied walls on either side. It was built in 1967, designed by the landscape architectural firm of Zion & Breen at the former location of the old Stork Club. The park has been called one of the city’s best public spaces, but adjacent construction had left it shadowed by scaffolding in late 2017. 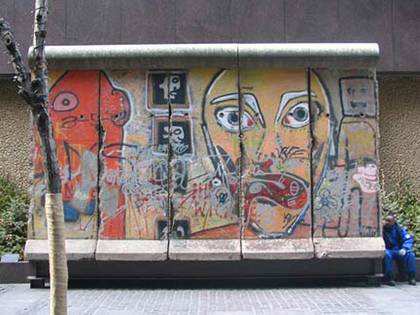 The Berlin Wall came down after 28 years in November 1989. 360 segments of the wall were offered for sale by a state-owned foreign trade enterprise of the German Democratic Republic, AHB Limex- Bau Export-Import in 1990. 18 sections of the wall wound up in the USA, including five in New York City: here on East 53rd Street, in the courtyard facing 53rd behind the Continental Illinois National Bank Center, 520 Madison Avenue. For several years, the large slab of wall, decorated with colorful street art, was displayed outdoors in the public plaza on East 53rd. Fearing weathering and vandalism, building management moved the wall section into its lobby, where it can be seen today.

Other Wall sections can be found at Kowsky Plaza near North Cove in Battery Park City; in the garden adjacent to the UN Secretariat; in Ripley’s Believe it Or Not at 234 West 42nd Street; and a section had been displayed at the Intrepid Museum, Pier 86, on loan from artist Peter Max, for many years.

Several locations around town that I visit while staggering around toting a camera mean more to me than others; East 53rd Street is one of those.