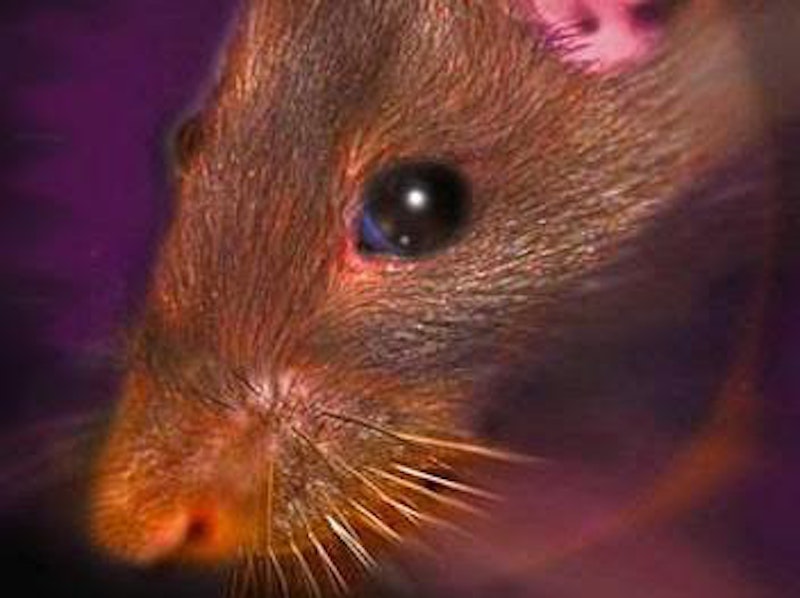 A patient rat grated its teeth while watching my friend Tommy unwrap a sandwich. Tommy then turns on the television set, time for America’s favorite late-night talk show.

Johnny Carson takes a drag off a cigarette before stepping out from behind The Tonight Show curtain. Doc Severinson wears one of his loud-colored jackets and strikes up The NBC Orchestra, hitting that unforgettable trumpet high note. Sidekick Ed McMahon announces a long, “Here’s Johnny!” Tommy kicks off his skank, black Chuck Taylors, plops down on the couch, ready to pummel a massive cheese steak sub.

In 1979, Baltimore’s punk scene subculture was cresting. It was a perfect time for moody art students. Nights went until dawn. A test pattern buzzed across the screen. The room smelled like linseed oil and fried onions. A wet oil painting sits on a nearby easel. Tommy’s sleeping, still holding the half-eaten sandwich. As his arm drops to the floor, the rat silently crept out from the dark corner.

Three a.m. in any hospital emergency room is a rough go. The attending nurse asked about the rat. Tommy, still in good spirits, mentions they’d been out earlier in the evening, gotten into an argument, the rat bit him, then took off. The nurse gave him a “look” like he hadn’t spoken. A few days later in painting class, Tommy unveiled four marks on the back of his hand. I couldn’t believe my eyes, rat bite scabs! Total punker. The hospital gave him antibiotics.

I’m not claiming to a rat expert, but I wonder about those who suffer from rat malaise when they sigh a loud “ew.” There’s no need to get excited. Everyone has an animal they find disgusting; rats often clock in at number one. Rats have been around forever—today’s mammals evolved from dinosaur survivors.

For years, we’ve heard urban myths and menacing rat tales: rats licking the milk off a sleeping babies’ lips, rats swimming through pipes into your toilet, and rat urine topped with droppings contaminating soda can tops. As rat numbers increase, so do the tales or tails.

Why do people dislike rats?

I’ll offer one theory: people have an affinity to hate little things that move around quickly in the dark. It’s easy to dismiss. Before one “unfriends” the rat, let’s look at its influence on pop culture.

First, some rat mojo in film: Theo Anthony’s Rat Film reveals the rodent’s complex relationship with Baltimore. There’s another documentary called Rats that investigates infestations around the world. And who could forget the opening credits to John Waters’ Desperate Living or the giant, hungry rats in Food of the Gods.

In the library department, Robert Sullivan’s definitive read Rats: Observations on the History & Habitat of the City’s Most Unwanted Inhabitants answers all your questions. Over in the music section I smell a rat; they’re crawling all over place. The Stranglers first album is Rattus Norvegicus, The Damned’s drummer name is Rat Scabies. Millions of fans approved of Ratt’s significant ass-kicking with Milton Berle in drag on their 1980s hit “Round and Round”.

There’s Frank Zappa putting out some extraordinary guitar on Hot Rats with Captain Beefheart vocals on “Willie the Pimp.” I’ll take that along with fond memories of Boston’s legendary punk club, the Rat.

Rats are everywhere. Why?

Numbers. Rats are very social animals and love to bone. Guy rats are “bucks” and girl rats are “does” and they make lots of baby “pups.” These little creations have a short oven time, with gestation periods averaging 22 days. Rats can reproduce about every three weeks. So that means two rats can produce multiple critter litters over the course a year. An adult wild rat’s average lifespan is about a year. In that year, they’re capable of a tremendous amount of damage, sometimes chewing electrical wires. Now that’s a problem.

Rats are also dangerous animals that carry diseases, pathogens and parasites. They can squeeze through the smallest of spaces. If a hole isn’t big enough, they’ll gnaw away the sides and make it bigger. Its powerful, flexible jaw structure is equipped with four sharp, large chain saw incisors makes any job an easy chew.

Remember “Pizza Rat,” the New York subway rat viral sensation? Wonder if it’s still eating pizza? Probably not. Last summer, Mayor Bill de Blasio announced a new $32 million, multiple agency rat reduction program. “We refuse to accept rats as a normal part of living in New York City,” said de Blasio. Then he joked, “I will admit to having a certain admiration for pizza rat, but that’s the only rat I’ve ever managed to like.”

When it’s dog walk time right before dusk in Manhattan’s Seward Park, I’ve seen dozens of rats emerge from under surrounding large sycamore trees. The rat race begins; they jump up and climb into garbage baskets looking for food. With numerous burrows on the left and right, keeping a tight leash is essential. Any canine in the park scavenging a poisoned rat carcass could prove fatal.

There was a “trash problem” once next door to my apartment. A grisly, old-school Pied Piper nervously waved me over to the bin area while baiting traps. The burnt-out expert offered an unsolicited tip, “I use Snickers instead of peanut butter.” He stressed, “be careful baitin’, ‘cause a misfired Victor (brand rat trap) can snap off a finger.” I looked over and counted his fingers. Results, if you’re lucky: one rat. That’s not a game-changer. Imagine my horror the next day when I went outside, opened the garbage bin and found a dead squirrel.

Another standard extermination method used is poison baiting. The usually frenzied effort involves carpet-bombing the building and nuisance areas with bright turquoise rodenticide placed in bait stations. Signs are posted warning humans about the poison’s potential dangers. That’s about all they usually do, here’s your bill.

If you don’t have a fulltime “rat patrol” constantly checking traps, the process has problems. In the interim, rats take notice of what’s happening, they aren’t stupid. Quite the opposite; rats are intelligent and have good memories. Rats work in teams. The alpha male sends out pups or the weak, they’ll survey the situation first and note results. Then Mr. Rat decides where to dine out.

New York’s rodent control program seems to be working and other cities are taking note. There’s been a noticeable decrease of rat surge in my local park. The old, overflowing garbage containers are gone, replaced with new hi-tech, solar panel trashcans. There’s an experimental birth control sterilization program in place. The EPA also recently approved the use of a new extermination method: dry ice. Burrows are stuffed with dry ice suffocating the rodents with carbon dioxide. That’s kind of chilling!

It’s important to sustain the present animal population living in our shared domain. Trying to totally annihilate any species seems unspeakable, so I’m not sure rat culling prevents their return. As we face the dangers associated with living around vermin, remember, humane rodent removal requires “rat-like” patience. There’s no quick fix. Meanwhile in that dark forgotten corner, a pair of beady, dark eyes watches and waits.