The Boy, His Teacher, and Everything Else

A look at a forgotten story by Gore Vidal. 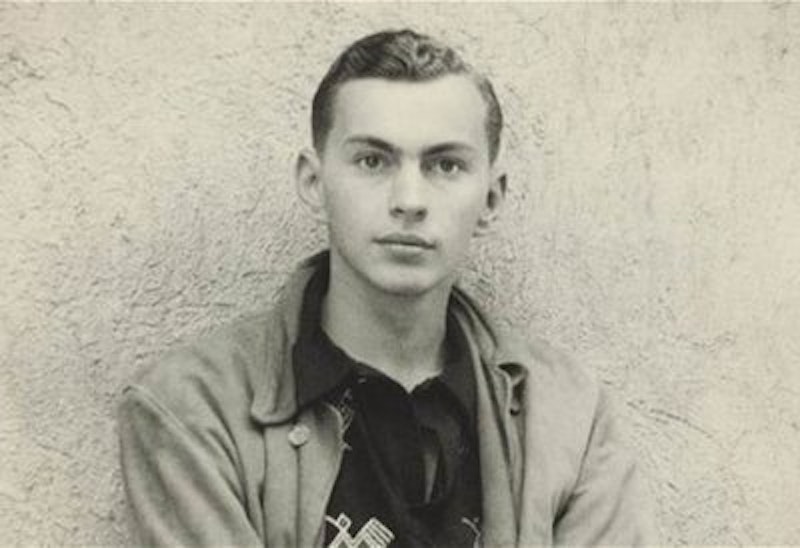 “In a corner was piled athletic equipment: football helmet, shoulder pads, sweat-marked jerseys, shorts, tennis racket… the tools of a serious career rather than the playthings of an energetic boy. No, he would never have known, never.” There we have a key passage from “The Zenner Trophy,” a story written by Gore Vidal when he was young and America was different. The boy owning the equipment is the star athlete at his fancy private school. He’s been caught with another boy, and this is the story’s thing up its sleeve, the unstated fact that plays out as you read. Hence the boy’s teacher must reflect, in the third person, “No, he would never have known, never.” We also have the boy’s impatient thoughts on the matter: “I guess there is something wrong with me, Mr. Beckman, because I can’t for the life of me see what business it is of anyone else what I do.” He’s getting kicked out of school for his era’s worst sin, and he couldn’t give a damn.

This is the story’s other unstated fact. His homosexing is the big thing that’s hinted but not stated; his indifference is the big thing that’s shown and carefully not told. The boy’s annoyed at being expelled, and that’s it. Why is the story called “The Zenner Trophy”? Because the school was going to give him “the Carl F. Zenner Award for clean sportsmanship,” and they won’t be able to. “I guess that’s their worry now,” the boy says. Colleges are lining up with scholarships and he’s ready to make his way. He’s living proof that, for the superior, the school and its credentials mean nothing.

In this connection, look at the phrase “tools of a serious career.” I see the story as young Vidal’s self-Valentine for excelling his teachers at Exeter. In Palimpsest he talks of how he despised them: “dim dispensers of conventional wisdom.” Here he whips up a cartoon on the theme of his superiority. At 20, the boy Vidal made himself a man with a career by publishing his first novel (“I am told that there was rage and despair in the English Department”). At 24 or 25, when he wrote “Trophy,” he’d published five more novels, one of them a best-seller. Compare his situation with that of the shuffling, slope-shouldered academics who used to be above him. Vidal certainly did, and he constructed a small and moderately graceful monument to the contrast.

The expelled boy in Vidal’s story might have had a well-used dictionary and thesaurus on his desk, not sports equipment in the equipment. He might have been a snooty, high-performing young literary type. But that would have made for too bald and obvious a match-up. Vidal substituted sports, easy to do since the love of his life had been a teen-age sports star. Jimmie Trimble, the true-life boy, features in Palimpsest. His photograph there and the book’s commentary on him suggest something close to the character in the short story, whom “Trophy” presents this way: “The eighteen year old Flynn was a well-constructed man of middle height, muscular but not burly like the other athletes; his freckled face was amiable and quite mature, his eyes dark blue; his hair, of no particular color, was worn short, in a crew-cut.” Unlike Flynn, Jimmie had blond hair, worn longish on the top, and he appears not to have had freckles; I don’t know if the eye color matches. But that leaves build and personality.

Vidal reflects on Jimmie, who died very young: “What we had entirely in common, apart from each other, was the fact that each was what he would already be when grown-up. He was professional athlete; I was writer. That was that. Neither was uncertain about what to do in the future because each was already doing it. This completeness set us off from our contemporaries.” In “Trophy,” the boy says, “I earn my own way. I can go to any school I want on a scholarship. Or I can turn pro tomorrow and make ten times the money that fool Principal makes.” It’s all true, and he’s only boasting about it because the school’s principal snitched on him to his parents.

Before this budding man-hero, academic authority is a bent-backed thing. Poor Mr. Beckman, the teacher sent to drum him out, ends up returning his library books for him. The young Vidal spends a good deal of time on a discussion between the teacher and the principal in the story’s first half. Already Vidal knows about official self-deception and the place-holder mentality, the sins of middle-aged authority and demi-authority. Like a lot of Vidal’s later fiction on such topics, the scene is intelligent but might have been shorter. Perhaps its louche unstated subject—the boys doing each other—managed to keep interest taut for those who read the story in the 1950s.

Vidal does manage a stroke. Poor Mr. Beckman can get sidetracked when he has to explain bad news, “as though by a very close examination of all detail he might somehow avoid the crisis.” He does so with the principal as the story begins; then, in the story’s second half, he does it again. This time he’s talking to the student, who’s cross about hearing that his parents have been notified. Beckman divagates, “addressing his attention, as he always did in a crisis, to the periphery of the situation, to the incidental detail in the hopes that he might yet avoid involvement.” What’s left unstated is that this is what he does in the face of authority. The effect, for me, is that I feel his submission to the boy; it’s like a climate that settles in.

“The Zenner Trophy” is all but unknown. Gore Vidal’s biographers don’t mention the story, and neither does Vidal in his writings. But I think it’s Vidalian in the extreme and makes a picture for us of his attitude toward life and the world, and how one is lived in the other. Vidal was a proud man, and he lived on the terms laid out here. He set off to make his fortune far away from schools, and his fortune he made several times over. In the meantime, he got by without a surplus of official honors, hanging his fame off other things than prestigious institutions. But in the end he left his money to Harvard University. It’s not often that a will is embarrassing. This one was. His editor at Vanity Fair speculated that secretly Vidal had wanted a college degree all this time, and that Harvard, “being the most prestigious of universities, was the place to put his legacy.” After yanking bare the squirming, tender weaknesses of so many other people, Vidal forced us to look at his own.

The principal in “Trophy,” that tubby moral fraud, has “agate eyes” that “extorted endowments from the most brutal of millionaires.” Gore Vidal fell prey to a similar bluff, one he worked on himself. He coughed up at last, and he did so after a lifetime of laughing to scorn characters like the principal. Of course, a man who’s always proclaiming his superiority and independence, over and over, is a man facing some psychic pressures. That’s no doubt why Vidal wrote “The Zenner Trophy,” one of his many self-monuments. (Palimpsest gives a page to reproducing the notice in the despised New York Times of Julian’s number-one best-seller status.) Vidal cared about the authorities and their approbation. The boy in the story doesn’t, and I bet Jimmie didn’t either.