What a spring day. Can you guess what year it is? 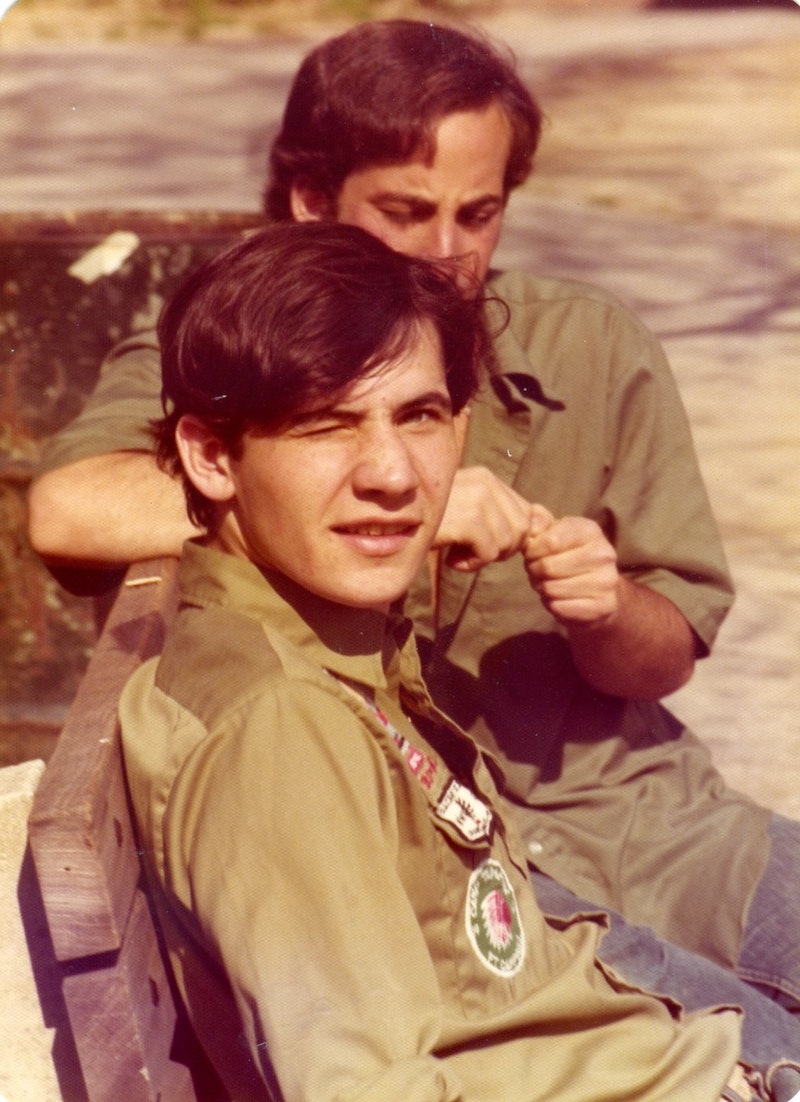 Nine years ago, Splice Today started a weekly feature called “What Year Is It?” accompanied by a photo and five clues, in which readers were asked—without Googling—to make a stab at deciphering the correct answer. A throwback here: the picture above is of an old buddy of mine, Joe, who was witty, sardonic, nasty, unpredictable, and almost always a lot of fun to hang out with.

Do your best in figuring out the year. Clues: Five of the top R&B hits were “My Thang,” James Brown; “Living for the City,” Stevie Wonder; “Hollywood Swinging,” Kool & the Gang; “Rock the Boat,” The Hues Corporation; and “Rock Your Baby,” George McCrae.

On that spring afternoon, Joe and Howie Nadjari posed for me, a little loaded on the beer of Joe’s choice, Schlitz. Like many people, I had lots of friends during my college years—and, after graduation, as inevitably happens, that wide circle narrowed considerably, and is on its last legs today, owing to age, distance and, unfortunately, early deaths—and Joe was the most idiosyncratic.

I met him on the first day of freshman year, along with about 15 others, and his hair was shoulder-length, lip curled as he spoke, and, not uncommonly, wore jeans, a Grateful Dead t-shirt (the Dead was the only band he listened to; I can’t remember a single other group he liked), and construction boots. As the day slipped into night, it turned out he went to a prep school in New England, but wasn’t from money, and was anything but the hippie presented on the Hopkins quad that afternoon.

He was a National Review subscriber, could read Latin and Greek, preferred Milton, Adam Smith, Euripides, Homer, Locke and Hobbes to any contemporary authors—he snorted when someone mentioned Vonnegut—and thought Wordsworth, Coleridge, and Rimbaud were “pussies.” A conservative longhair, a rare bird at that time on a college campus. He could be crude—one time that September, he arrived late at the dining hall, and, upon asked about his tardiness, simply said, “Oh, I had a quickie in my dorm room with this really nice chick, fucked her with my boots on,” and though a few eyebrows were raised, especially from the gals present, it didn’t cause the fuss it would today.

One morning, near the end of that first month, he appeared on the quad, ready for a nine a.m. history class, had a crewcut and was wearing an army uniform. This was a stunner, and not the prank some of us initially thought: he’d just been to first day of ROTC training (he joined to slash tuition, and, as it turned out, because it was part of his planned career trajectory). He earned a new nickname, G.I. Joe, which he relished, but otherwise was the same guy. One night, a year later, when we were roommates for a time at a house four miles from campus, we took a bus up N. Charles St., got off at a stop around a mile from the house, but both really loaded, decided to crash on the lawn of a church. It was a little weird when we awoke in the morning and had congregants stepping over us to get inside, making un-Christian comments, so we vamoosed quickly and walked home.

Joe, when lit, could turn on the braggadocio. One time during sophomore year, we were at a party where about 75 people crowded into a small St. Paul St. apartment. Surveying those in attendance, Joe said, pointing out different guests: “This is a minefield. Fucked her; fucked her; she blew me off; hand-job from her; too much to drink, couldn’t get it up with her; fucked her on the floor; lousy lay; really dug that chick, but got nowhere, I think she heard some bad shit about me, which was unfair, for sure.” Another friend and I, listening to the locker-room hyperbole, just rolled our eyes, and scooted off to the keg of National Boh, leaving Bad Romeo to his own realities and delusions.

A few years later, at a house on N. Howard St. where I lived with a rotating group of roommates, Joe was with his then-girlfriend, and I overheard them talking about the first issues of City Paper. Barbara thought it was very cool, but Joe demurred: “C’mon, of course Russ is a great guy, but why’s he wasting his talent on a hippie rag that won’t last six months? He ought to aim for The Wall Street Journal.” That was Joe, a contrarian and loyal friend.

I’ve no idea where he is today—completely in character he uses no social media—but I’d guess he’s retired from the Army (and his subsequent hush-hush employer that took him all over the world), but it’d be a blast to meet up again. I wonder if he’s softened with age—from a large family, I’m assuming he has kids—but no doubt he’d be great company.

I last saw Joe in 1987 at a Johns Hopkins reunion, and he came dressed in his usual garb, smoking Kents instead of unfiltered Camels, and made fun of the Armani suit I was wearing (no tie, tab-collar dress shirt) and that dig out of the way, we gabbed at a deafening pitch, along with Howie. As it turned out, we had an after-party—once the centerpiece event wound up—with two sixers on Preston St., and he and Howie crashed at my apartment, all of us waking up much the worse for wear. Joe, in a haze, split around 10 a.m., and a few hours later I got a call from his sister, who said she’d be driving up from D.C. to retrieve his briefcase, which he’d left at my place, unlocked.

Naturally, I took a peek inside, combed through the confidential documents, but couldn’t make hide nor hair of them. I tried! He called later that night, embarrassed, and asked me not to relate the incident or write about it in my City Paper column. I assented, but at this point, as we’re both 64, I think that embargo has been lifted.