I Take No Offense

When did Americans become so sensitive? 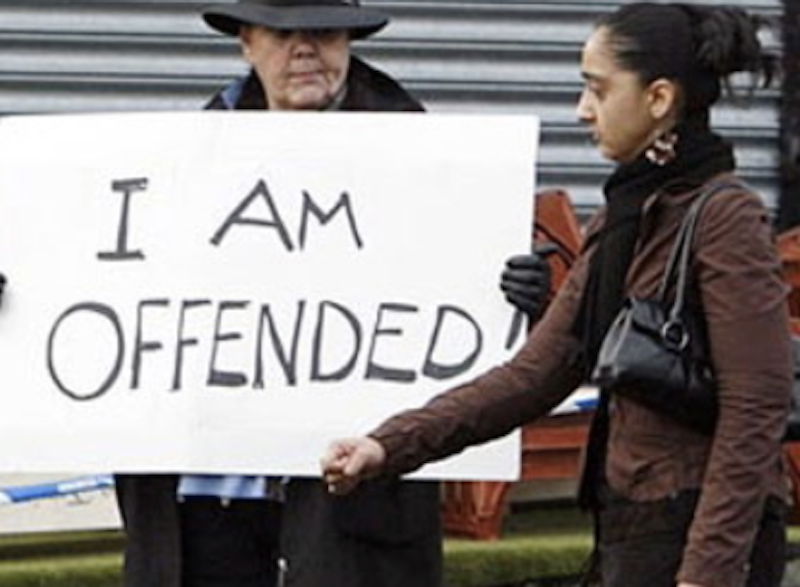 Everybody's offended by something today, you can't say or do anything without pissing somebody off. Chances are you've offended somebody, or worse an entire group of people. To say you're magnanimous toward others’ hardships, loss, pain or suffering is bullshit. When you’re numb from the neck up how can you possibly feel anything? Empathy for others isn't very popular. People don't give a shit about your feelings. Overly sensitive types needn't bother apologizing for existing in a world of angst-ridden insecurity. “So sorry for your loss,” doesn’t make it feel any better. Better luck next time isn’t enough, and fawning over idiosyncratic behavior is too much. When did we become a bunch of feeble grannies?

In 1975 an obscure singer/songwriter named Morris Albert recorded a hit song called "Feelings" and the sickening sweet sound of sappy sentimental songs would never be the same. Lounge lizard crooners in every Holiday Inn airport lounge bar and wedding band singers had to include this soul-crushing tune in their act. It might be one of the most requested songs of all time. There was a time when I heard that insipid drivel everywhere. Piped-in recorded music on elevators, grocery stores and call waiting phone muzak wreaks havoc with emotional assaults on my ears. Our feelings became part of the politically correct times. It dictates the actions and reactions of the offended or offender, depending on circumstances of personal insult adding injury to delicate psyches.

It’s a perfect parody song, change the title to "Peelings" and make it about old flaking painted mannequins in a storage room or the dead skin aftermath of a bad sunburn. Even a song about kitchen duty in the Army peeling potatoes. Someone is bound to take it the wrong way and get their feelings hurt. It's easy to offend when you have opinions that differ from the mainstream. I've taken it personally when confronted with my actions or beliefs that go against the grain. Then I realize it never really mattered. Rub people the wrong way. Say mean-spirited and spiteful things that sting. Make bad situations worse with a dust-up of condescension. A shitty attitude and a worse disposition. Too thin-skinned to care for this cold cruel world. Left feeling ill at ease in your own flesh.

Our fragile egos crack under the scrutiny of others. How did it get so bad? Touch a nerve to the point of tears. Push all the right buttons on the circuit board of emotional balance. Plus or minus, put out a jab or a dig to rub salt in your wounds. When did we become so soft and gooey? Can't take it, give it up or let it go. Get a grip on the situation. The golden rule, to do unto others before they screw you. It's a way of life. None are created equal and we’re all targets for ridicule. Giving each other grief for the sake of a hard time. Some find it amusing to belittle others.

We've lost that personal touch to reach out and connect in real time. What was once a human quality is now frequently pre-recorded conversations with digital devices incapable of feeling anything. The one-on-one personal touch of going that extra mile for your money. Like any good used car salesmen would do. The old double-talk con job, bought and sold. We buy the lies that fit our world. You can’t reinvent bullshit, yet we make it up as we go along. Give it mass appeal. Create a bubble of toil and trouble. Who is the prettiest of them all in that cracked mirror vision? Truth is absolute… no matter what you believe.

Basic truth makes liars uncomfortable, though the public eye is offended. To always believe opposites.  An anti-social club of introverted fearmongers living in a vacuum of distorted facts. Wearing blinders, tapping white canes of disdain while feeling the braille of a lame fiction. Life doesn’t come with an instruction manual. Accept or reject. Necessity dictates how to cope or melt down when criticized by others. Some people are so full of themselves that they have no room for their own shit. Be true to you and yours, to hell with the rest. Before you get your bloomers in a bunch remember to let others do their worst. Politics and religion are an option but not a requirement. You may suffer the indignities of an unjust world but the view of the world looks okay from where I stand.