My Brunch With John Boehner

A meal with the former Speaker doesn’t go well. 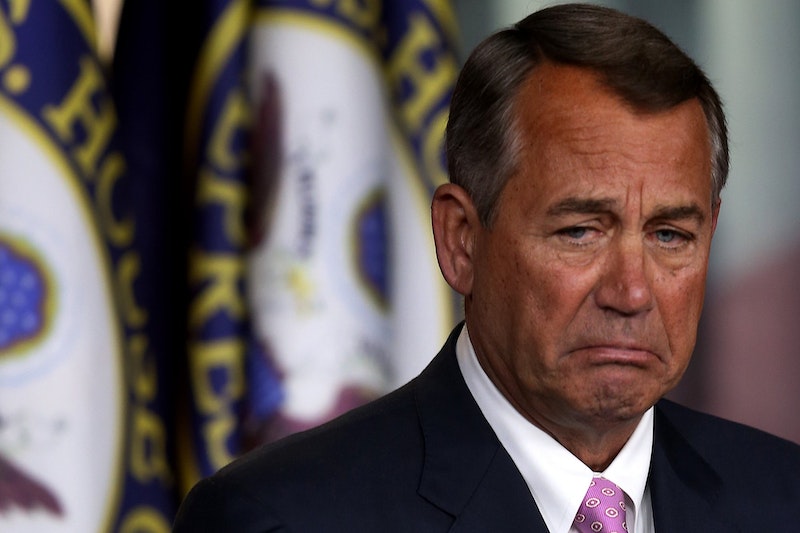 “Waiter? Waiter? Waitress? GARÇON?” John Boehner is such a prick. I don’t know why I accepted his invitation for lunch—it’s not as if he offered to pay. As far as I know, this is all on my card. Boehner puts away three martinis and a bottle of wine at lunch easy. It’ll probably be worse today—this is the first time I’ve seen him since he resigned from his post last fall. “I need a fucking poached egg.” I blanche, and Boehner’s eyes go oval. “Oh—I’m sorry, Q. Never mind. I’ll be getting the bacon. Maybe a piece of dry toast, too.” He hacks up something thick and green, and deposits it in his cloth napkin. He looks terrible, like raspberry chocolate Häagen Dazs. The face of melted mousse, with big egg white eyes, bloodshot red leaking tears, his fork and knife vibrating by the standing tremor of his hands.

He turns to me, spilling jam on his khakis, shaking as the waiter approaches from behind and then slowly backs away as the former Speaker of the House clutches my wing and nearly keels over. “I don’t know what to do,” he whimpers, sobbing as the din of the restaurant dims and everyone starts giving us over-the-shoulders, side-eye, and full-eye. This man is loaded, and I know he didn’t look at the prices on the wine list before ordering. “I’m in so much pain, Rooster,” and no, we’re not on a first name basis, this just means he’s piss-drunk, completely oblivious and we’re getting glared at by the manager and he’ll be having words with us later. This is a scene.

I brush Boehner’s tanned hide leather hands off my wing and give him a smack, gentle as a feather. I scratch his pant leg with my spur claw and try to get his attention. The manager is talking to someone with a radio. He looks stern. Very stern. I don’t think Boehner has any cash on him. In fact he looks rather disheveled, and so I ask how’s he doing, what’ve you been up to, we haven’t spoken in six months, you haven’t returned my calls, I’ve been worried sick, the whole schmear. I don’t care about him, I just want the access. John Boehner has famous friends. Some. I met Jon Voigt once. But not through John. Now that I think about it, this orangutan fuck hasn’t done much for me at all, besides embarrassing me at the place where I get brunch every Sunday. Now I have to find a new breakfast spot? This is foul play.

I’m unfriending him on Facebook when I get home.

There are tears pouring down onto his empty plate, and I scratch him again and he yells OW! and I spur claw his face until it’s all red. People are shocked and they don’t know what to do, but I finally have his attention. “Why are you so upset?” I ask. He looks at me with his heart in his throat and says, “I’m being deported.”