My Brunch With Boehner, Part Two

Struggling to understand the former Speaker of the House. 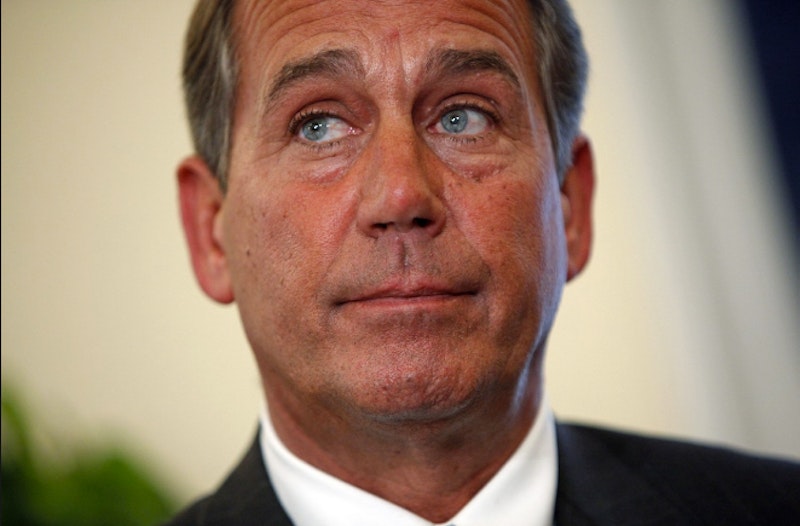 “Deported!” You can hear a feather drop in the restaurant, and John Boehner’s blubbering has subsided a little bit. Tears are streaming from his crimson cheeks onto his plate of dry toast, but the wailing has stopped—now it’s coming in jags. People are pointing their smartphones at us, silently recording, mouths agape. The manager is talking into a walkie-talkie and he’s been looking at us for 20 minutes. I don’t think he’s moved an inch. I definitely have to find a new brunch spot next weekend. This is so embarrassing. Boehner isn’t my friend; this is transactional politics. Besides courting and copping a handful of famous and semi-famous friends (Jon Voigt), he hasn’t gotten me a whole lot of anything but trouble. The manager is coming over. He is walking over to our table now. John still isn’t looking up. He has his head in his hands. We make eye contact and he opens his mouth. There will be words.

“Sir? Is there a problem with the former Speaker?” Oh, so now I’m to blame for John’s alcoholism? Who orders wine before noon? The manager hasn’t even addressed John; he’s talking to me! “Well whatever do you mean, Mr. Taplin?” I looked up his name. We don’t know each other. I’m hoping to salvage this while I can. I move my wing to cover as much of the sopping wet tablecloth as I can—he’s soaked the whole thing through. “Sir, the Speaker appears to be having some sort of fit. Several of our customers have already left. Three skipped out on their checks. Mr. Boehner is a frequent guest and we’d love to let this slide but the situation has obviously escalated and I would like to ask you to fix it for us. Thank you.”

My heart starts fluttering—what the fuck am I supposed to do? The manager blanches, noticing the withdrawal of my spur claw from beneath the tablecloth. “Oh Sir, I’m not permitted to talk or touch or speak to the Speaker directly. Only through interpreters and consenting guests. Would you mind? We’ll cover the check at this point; obviously we’d really rather you both leave immediately. I don’t want my restaurant to go viral again. We’ve already had some food poisoning incidents this year.” I’m too shocked to say anything, so I wave the manager away and do my best to brush John out of the door and to the car—his car, which I now have to drive, I guess. I appreciate that they covered the tab, but wow, am I even allowed in there anymore?

I steal John’s keys from his coat with my spur claw as I drag him to the car and throw him into the passenger seat. He’s silent now, his face etched into a perma-frown, still leaking tears. His face and eyes are blood-red. I start driving and no one says anything for five minutes. At the first stoplight, I can’t help it. I turn over, spur claw his hand, and get his eye. “What is wrong with you?” John looks at me and says, “I’m being deported. Tomorrow.”