The Dollar Girl and What I Said to Her

This time I made a stand. 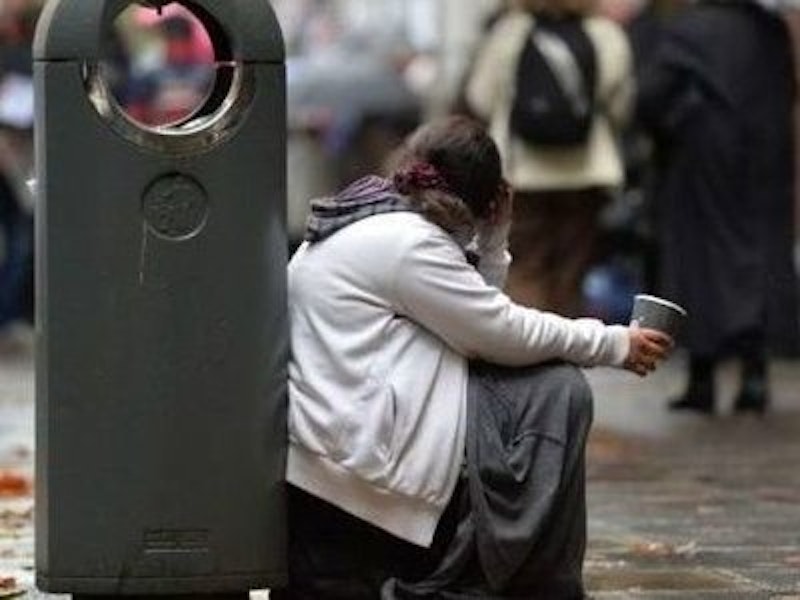 I saw that same girl again, the one who asked me for a dollar. She did it this time too. It’s a low trick, I think. She’s pretty and knows she can catch men off balance. A fellow’s walking along the platform and she steps in his path and makes full eye contact. He thinks she’s interested in him, then she asks for a dollar and he’s embarrassed. To cover himself he reaches into his pocket and finds some money. Not all men do this, obviously, but a percentage, and they make the dodge worthwhile.

She tried this on me in December. I said no and moved on, but it bothered me. Four months later and there she was, same platform. I remembered the girl as having an upper-class air. This was partly sharp-looking clothes, partly a fresh-looking face, partly my experience that upper-class kids tend to be trim and hard-nosed. They have a ready confidence that people, on being prompted to do so, will hand over what the kids want. That quality was still with her, and maybe her clothes were still sharp. But the fresh-looking face was gone. She looked haggard. Not careworn, because then I think her manner would’ve wilted, and her manner was as spruce and firm as ever. But maybe there’d been shrinkage in the amount of face available to her skull. Her cheekbones looked less like cheekbones and more like bones.

As before, she loitered near the spot where a tunnel feeds into the platform and you begin the long walk to the Orange line. This was late afternoon and a flock of passengers, myself included, was stepping off the Blue train and headed for the tunnel. Stepping in our path, she picked me as the first victim. Her face didn’t so much light up as acquire an extra bit of perk and determination. She’d known she was going to target someone, and here was a likely customer.

Our last encounter and this one played out almost the same. “Excuse me,” she said, locking eyes. “Can you spare a dollar?”

Her: “Thank you. Have a nice day.” And back to scanning the crowd.

Now here’s the difference. “No!” I said, or barked, and she jumped. I said it as I passed her; she had already turned away. Maybe I barked into her ear, but if so that was a lucky shot. At any rate her chin jerked up and her eyes swung open good and wide. I marched on. I meant no to having a nice day, which is absurd. But it bothered me that I would get fobbed off with a bank teller phrase. She was processing me. She was working her way through a herd, all the unattached men there, and we counted as a herd just because she was a pretty girl who kept her cool. That attitude is a lot to swallow, and since my first go-around I had chewed over what I might say to her. On my second encounter I said “No!” Nothing great, of course. My temperament proved, as always, to be what it is. But I kept the promise with myself. I lurched into action and refused to look back. It was a wallflower-tries-to-dance moment. If her chin hadn’t jerked up—if I hadn’t rattled her—I would’ve felt like a fool.

Down the long tunnel to the Orange line I listened to music playing. This came from two kids playing their instruments at the tunnel’s end. Buskers are always at that spot, and I give them something if I think they’re okay. Or I do that sometimes. In this case I wasn’t inclined, possibly because of the dollar girl, possibly because I’d fallen in step with three mentally handicapped adults and their minder. They preoccupied me until I reached the escalator and stepped aboard for the long, steep ride to the platform I wanted.

The kids were singing as well as playing. I had heard them before, but not as well as I did aboard the escalator. As the steps climbed, I suppose I entered an acoustic sweet spot. The two kids’ voices hung in the air, slender but ringing, and I thought it was a shame that people couldn’t tell how good they were, not until the people were being carried away from the kids and the blanket for the money. When I reached the next level, I turned around and took the escalator back down.

One of the kids was an East Asian fellow, slight and playing (I think) an accordion, and the other was a dark-haired white girl playing guitar. I stooped to drop a few dollars in the blanket. “You have beautiful voices,” I said to the girl, who was closest. She was pretty too. Not in the manner of the dollar girl, a very different style: curved cheekbones, soft eyes, her white skin against dark hair. When I said what I did, she didn’t just smile. Her eyes lit; she seemed so happy.

I climbed back on the escalator, and eventually the subway took me where I was going. Since that day I’ve thought a few times about the dollar girl and what I want from her, what our encounters mean or don’t. I remind myself that the dark-haired girl was there too, and that she smiled, but the thought doesn’t stay with me for long. I think about the dollar girl. And the moral of the story is that’s the way I am.