Navigating the abandoned and forgotten scraps of the New York City subway system. 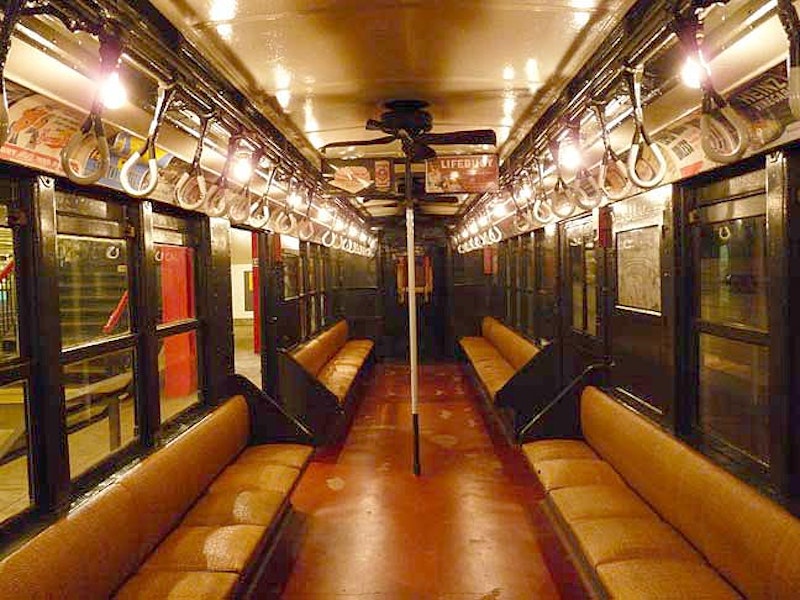 In late March, it was suspected that a vagrant or troublemaker vandalized the NYC subway system, already reeling from lack of patronage due to COVID-19. Fires set in shopping carts hit three stations along the uptown Lenox Ave. line, devastating a trainset at the 110th St. station, killing a conductor and nearly destroying the station. It’s beyond my understanding the purposes behind vandalism on this scale; wage inequality, general anger about the ridiculously bad state of things. Who can tell? Were it not for the virus, this would be front-page news for days on par with the subways’ other tragedies over the years such as the Malbone Street Wreck. Now, it just wafts over.

I’ve been a subway enthusiast for years, since I rode it as a boy with the old man. In those early days, we took it to Whitehall St. to meet up with my mother, who worked at Manufacturers Hanover Trust when it was a separate downtown entity. Other than that, I was mainly a bus rider as a youth. But over the years I rode the trains more and more, paying attention to the station mosaics and the gradually streamlined appearance of the cars. When I was a kid, some of the trains still had wicker seats and overhead fans.

The Low-Vs were pioneers in the longitudinal seating model that’s been used for all new subway cars produced since the early-1980s. I much prefer seating that allows a look out the window, especially on elevated lines but also on subways—I have a hawkeye out for stations, seeking old features or irregularities. Longitudinal seating permits clear views only to your opposite seatmate and his chicken bones.

The ceiling ads next to the fan hawk Royal Baking Powder and Lifebuoy soap. Royal was produced as early as 1866 (in 1929 it merged with another company to form a huge food conglomerate, Standard Brands); Lifebuoy was introduced by the Lever Company in 1895, and ads for the soap produced a couple of the funnier moments in pop culture—ads popularized the abbreviation “BO” for body odor and employed a two-note foghorn call on radio commercials, which was quickly picked up in Looney Tunes cartoons. 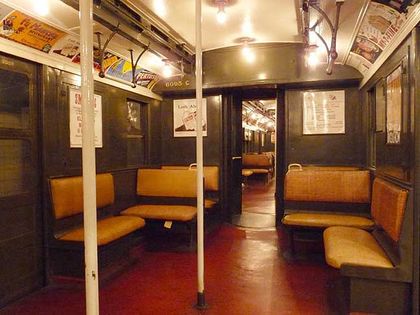 Car #6095C, one of three BMT D-Type Triplex cars in the Museum; built in 1927, these cars were mainly used in southern Brooklyn on the routes going to Coney Island such as the Brighton (today’s B and Q) and West End (today’s D), as well as 4th Ave. local (R). These cars were the first built to show a route designation in the front (in the 1920s up to the 1960s, BMT routes carried numbers) and twin lamps in the front (various combinations of red, green, yellow, white) that were used to signal route designations.

The Triplexes were in continuous service for 38 years, between 1927 and 1965. Think of standard subway car decor between then and now—these older cars are reminiscent of the golden era of railroading, with olive-green riveted metallic surfaces, wicker seats and incandescent lighting. Compare the modern R143 and R180 cars—they look like dentists’ offices.

In many cases, period advertisements have been preserved. I can make out a few: My-T-Fine pudding, which is still around; the old Fu Manchu Restaurant, which was at 108 W. 49th St. (now occupied by 1251 6th Ave., aka. the Exxon Building, though Exxon moved out long ago); Griffin Liquid Wax shoe shine liquid; the Duplex Cocktail Lounge, Beverly Hotel, Lexington Ave. at 50th St. (still there, now the Benjamin Hotel); and the eternal Wrigley’s Spearmint Gum. 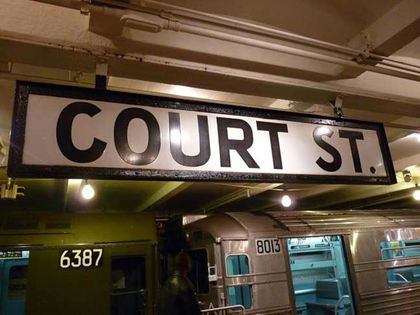 Examples of wonderfully simple black and white enamel IND signs still abound in the Court St. station and look as new as they were when the station was briefly open to real subway traffic. With IND signs, simplicity was the rule in opposition to the “busier” Beaux Arts and Arts and crafts station art and signs installed between 1904 and 1928. The IND also had a font all its own that, as far as I know, has never been digitized. Some enterprising designer should get cracking on lowercase letters and punctuation. 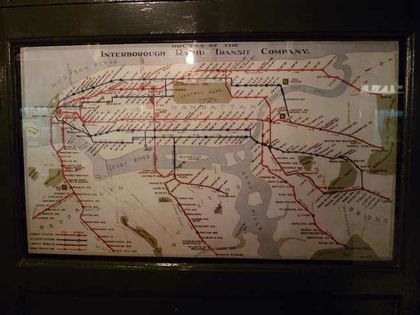 The earliest subway maps were hand-drawn and hand-lettered and depicted only the subway division in whose cars they appeared. The Interborough Rapid Transit and Brooklyn-Manhattan Transit were competing companies separate from each other, even though in some cases they ran in different parts of town. While the IRT controlled subways and els, the BMT ran subways, els, surface lines (trolleys) and buses. In 1925 the city began building its own Independent subway, and purchased the other two lines in 1940 to unify the subways.

The unification allowed comprehensive subway maps showing all three divisions to be produced. The most handsome was probably produced by the Hagstrom Map Co. beginning in 1948.

I enjoy wandering around thee Transit Museum, the depository of NYC transit history, with ancient subway cars and station ornamentation, turnstiles, signs and exhibits, and was re-fascinated by the collected history of the 111-year old (as of 2015) system. I’ve been a member for years and my card is the price of my admission. It’s been open since 1976, but the virus and budget cuts have put it in jeopardy.

The Museum’s located at Boerum Pl. and Schermerhorn St., Brooklyn, in the best-maintained abandoned station in the system, the IND Court St. station. When it was in passenger service from 1936-1946 it was a shuttle terminal, with the tracks connected to the IND 8th Avenue Line (A, C) and IND Crosstown Line (G) at the Hoyt-Schermerhorn station. When in service the shuttle had the designation HH. The platform was in use again from 1959-1981 as the western terminal of the Aqueduct Special, and has often been used by motion picture producers who wanted an authentic appearance of a NYC subway station.