Getting Girls at the Laundromat

It's quickly becoming a lost art. 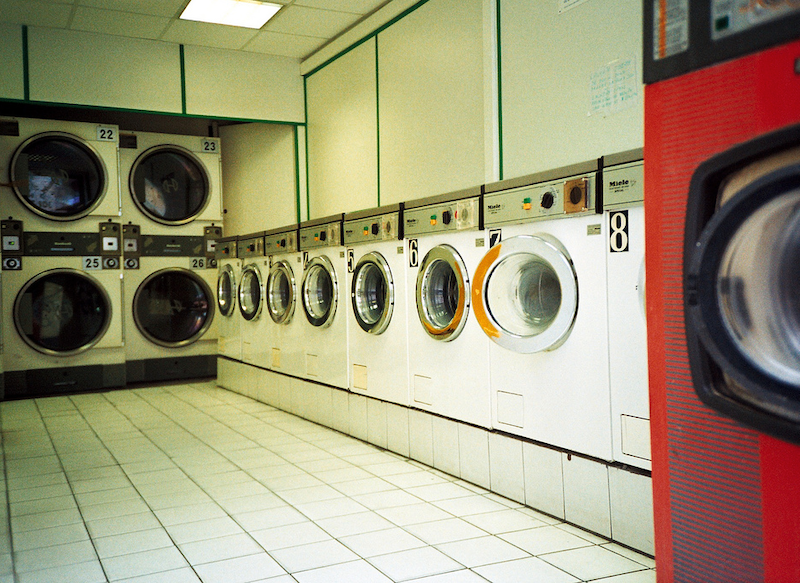 Laundromats are facing tough times. According to an article in The Atlantic, since 2005, the $5 billion laundromat industry has suffered a 20 percent nationwide decline. The cost for utilities like water and sewage services are rising, and upscale urban renters are now expecting a washer-dryer unit in their apartment. This is a long way from the multi-billion dollar industry that began in Fort Worth, Texas in 1934.

Laundromats once offered a unique combination of three things—clean clothes, spiritual contemplation, and the hunt for love. When I was a college student in the 1980s and living in Glover Park, a D.C. neighborhood near Georgetown University, the Super Clean Laundromat on Wisconsin Ave. was where I’d go to escape the roommates, read, and have some quiet reflection. There was always the chance I’d meet a girl and get a date. Once, a young lady and I struck up a conversation about New Order while we watched the colors tumbling dry. She asked me to walk her home, and while I’m sure there’s an Oxiclean pun in there somewhere, a gentleman doesn’t discuss such things.

Journalists and sociologists have noted the phenomenon of the “snowflake generation,” Millennials who are extremely tender because, glued to their phones and living at home, they’ve avoided the life experiences that mold people into adults. Experts have also bemoaned the loss of the “third place,” that spot outside of home and work where people could hang out and socialize. Such a place was the laundromat. Were a lot of these places run-down dumps that overcharged and were boring as hell to spend an afternoon in? Yes. But they also provided a useful transition from adolescence into adulthood. Set in urban locations and frequently catering to college students, they were where you learned how to fold your towels.

In Edgar Wright’s terrific movie Baby Driver, a crucial scene takes place in a laundromat. The character Baby (Ansel Elgort) has met a girl he likes Debora (Lily James), and asks her to meet him in a laundromat. Baby is normally pathological quiet, but in this setting Debora draws his story out of him. He’s an orphan, drives for a living, loves music, and obviously likes her. In the laundromat there are no parents, no pounding club dubstep to scream over, no coffee shop chatter. The rhythm of the machines goes with the music on the soundtrack, and in a brilliant shot the tumbling driver morphs into a turning vinyl record. It’s the perfect setting to have these two characters take their relationship to the next step.

While far less colorful and romanticized, this kind of scene used to take place all over America when laundromats were at their peak. As Marc Vartabedian notes in The Atlantic, “Laundromats, communal spaces that brought people together to perform a mundane chore, became a fixture of the urban experience, with Hollywood using them to stage serendipitous meetings, as it did in the 1985 film The Laundromat.”

They were also great places for study. In college sometimes you’re tired of the same faces in the library and can’t take another second watching your roommate at home clip his toenails. Often the Deep Clean Laundromat I went to in college would be completely empty, and I’d put my load in then settle into a chair with a book. I remember some of them, accompanied by the slow roll of the dryer: Saul Bellow’s More Die of Heartbreak. Charles Bukowski’s Love Is a Dog from Hell. The Screwtape Letters by C.S. Lewis. I met and dated a girl when I mildly insulted her for reading Less Than Zero.

Without phones or laptops, I was forced, like Baby, to launder my own stuff and to earn a girl’s trust by showing I could both speak well, and knew when to add the bleach.