Rooster and Monica roughing it on the streets of Philadelphia. 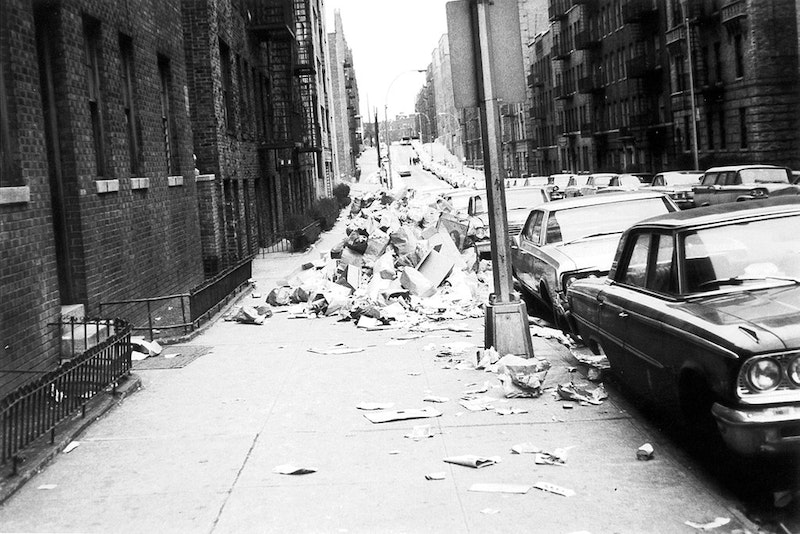 No news is good news. I like remembering at night when the air is still and everyone else is asleep. I feel more comfortable without an elephant around (you can’t trust them, ever). Before Monica and I could afford to leave society we lived in a converted milk crate in West Philadelphia. Miserable. Everyone is so mean there, a boulder on their shoulders. Are you talking to me? is not a rhetorical question in Philadelphia. First there will be words, and then there will be broken bottles (they’re all alcoholics), and then fisticuffs. Keep in mind I don’t have much to fight with or bite off (they’re always wearing leather).

One night I had to suffocate a robin that was trying to steal our dinner. I’m not proud… but this bitch came in and starts screaming and trying to snatch the cratered peach Monica salvaged from outside a bodega. Robins are extremely loud and obnoxious. People don’t know because robins lay low, singing sweet songs whenever humans are around, kissing in gardens and drinking coffee on their sanded deck. Robins are not well regarded in the avian community. It’s kind of like your OJ thing. Very disingenuous and disrespectful birds.

It wasn’t quite Roughing It, but we had our times. We were still using street drugs, mostly rock and sometimes powder cocaine, just to keep any appetite at bay. We had no access to food but there were extremely powerful stimulants littering the streets. Every night around two a.m. my friend Slanty and I would scoop the streets with a little cookie pan and collect every half-empty vial and stray white pebble, sniffing the edges like one would with cookie dough now—a guilty pleasure, then never considered. Slanty was my friend but Monica hated him, I didn’t know why until I saw him make a pass at her one night after a street sweep. But it wasn’t so bad: that evening Monica and I had drugs and food. Slanty tasted a little sandy, sort of withered but still of quality dark meat for a city bird. Monica and I could assimilate but only to a point. We never expected to leave Louisiana.

I don’t regret killing a drug buddy. Nobody missed him, and we moved out pretty soon after. Somebody else’s mess to clean up. Before we made it up to New England, Monica and I hitched and got stuck in upstate New York in the middle of a huge blizzard. It was too late to fly north, and geese are so irritating anyway, why bother? So we stole someone else’s car and made our way into a barn in Connecticut. No, I don’t regret leaving a woman to die in the snow; she probably wanted to die anyway in that kind of traffic. I operated the gas and brake pedals while Monica steered, a little nervous but very much game and still high on the adrenaline of having sucked the jugular out of this poor woman’s neck. She was chewing it like licorice for the rest of the 36-hour drive, and sometimes we still joke about it: she points, exaggerates chewing, mimes pulling it out, and we laugh. It’s fun to remember sometimes, and good for insomnia. Puts me right to bed. Until next time—spay and neuter every dog and cat you see.