A walk on the mild side in Lower Manhattan. 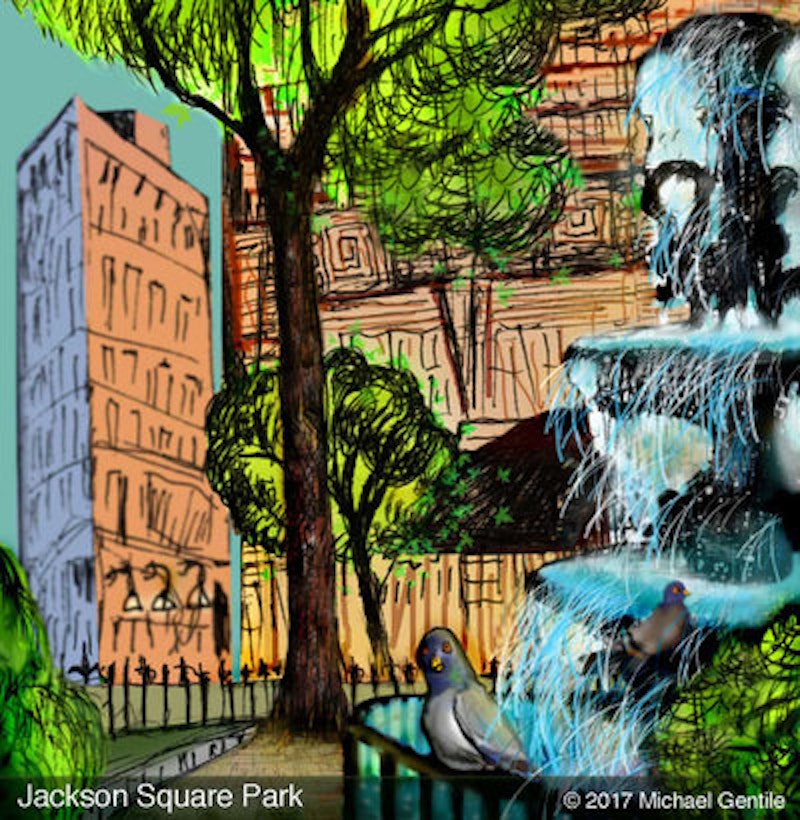 A recent exploration of Hudson St. confirms my suspicions about Manhattan’s former Wild West Side. Starting in Tribeca, an early Sunday stroll became a funeral procession of collapsing retail and offices, all empty, leaving nothing to smile about. Is this the “Just Salad” generation of real estate?

Centuries ago the Hudson River shore’s edge was a rocky beach with docks, piers and wooden sidewalks. Merchants were busy emptying colonial ships full of cargo. There’s a plaque explaining that and indicating the original shoreline at The Ear Inn on Spring St.

Shops and warehouses made print culture the prominent player in the Hudson Square area around Canal and Varick Sts. known as the “Printing District” from the 1920s and decades thereafter. In its place today is a campus-like culture of media and tech companies surrounded by the wealthy and fashionable.

With names like Truffles Tribeca, the new norm here is luxury residential properties. It comes as no surprise a recent New York Post article, “The Sexy History of “It” Buildings,” mentions a particular warehouse building. 443 Greenwich St. was built in 1882, and was once home to a book bindery. During the 1980s, that was the building directly behind my old residence on Hudson and Vestry Sts. You could see into my apartment from across the back alley, and maybe catch me dancing in my underwear to the Pet Shop Boys.

The impeccable restoration and re-design of 443 Greenwich St. is a showcase for amenities like warming drawers for cappuccino cups. A natural celeb magnet, just pony up your millions and have Jennifer Lawrence, Jake Gyllenhaal and Mike Meyers as neighbors. But you won’t see me dancing there these days.

There are also a number of lame conversions around Hudson Square, some so generically sanitized it could be Denver, sans mountains. It’s difficult to understand what drives people to live around this congested area. There’s a serious problem: the entrance to the Holland Tunnel, and that’s not going anywhere.

The dangerous Hudson and Canal St. intersection is the “gauntlet of death,” as you’re faced with a never-ending crosswalk that spans eight lanes of exhaust-choking, bird-flipping, horn-honking traffic. Cars from every direction desperately trying to escape from New York to New Jersey funnel into the underground tube. To avoid becoming a statistical pedestrian fatality requires triathlon know-how. The fate of a few has been… well, there’s a wreath of flowers for that on the bordering sidewalk walkway.

An upwardly mobile family with a baby stroller tries to make the light. A young daughter leads the way, holding mommy’s hand, maneuvering the difficult crossing. Brave child, I think. Wide-eyed mom is wearing Prada and Bose wireless headphones, nonchalantly sipping a Venti Starbucks iced latte, oblivious to her surroundings and with a look of indifference. Really?

Looking back to the 1990s, a forgotten bar called the Printer’s Pub was on the corner of Desbrosses and Hudson Sts., right in front of the tunnel entrance. What an amazing step back in time to the 1950s, a striking dark green interior with touches of pink and black, and wide Venetian blinds covering the front windows. It’s just the kind of place to hit it hard while staring at the blurring red taillights on a rainy evening, a view reminiscent of an early Larry Poons painting.

Years ago, a couple crossed the very same intersection, two tightly woven dark figures silently gliding along. Lou Reed’s Perfect Day should’ve been blasting at full volume. Holding each other, arm in arm, Reed and Laurie Anderson. Lou had on a very cool, black leather jacket. They looked happy and I smiled.

There are blocks to cover, so I stroll along and see something that defies common sense: a euphoric, Vassar t-shirt girl is face-timing while pulling a hesitant French bulldog. Arrest worthy? The bulldog is a dangerous dog trend. Michael Brandow’s biting book, A Matter of Breeding, fully documents the ongoing problem and health issues of the flat-faced, low to ground canine. Judging from the look on the animal’s face, the dog was begging to go home. No smiles on this block.

Heading northward, I spot Ms. Ponytailed Jogger with a yoga mat wearing a hi-tech yellow sports bra. She runs past with yet another bulldog, or was it a Boston terrier? On only a glimpse, it’s hard to tell. The streetscape pattern continues to repeat: another bank, a Starbucks, and Just Salad. Damn, we just don’t know how lucky we are. The church bell tolls at St. Luke in the Fields.

Bohemianism ratchets it up a notch at the beatnik and writer’s ghost bar. Did Dylan Thomas drink 18 shots of whiskey, neat? There’s a plaque for that honoring his memory behind the bar at The White Horse Tavern. The maître d’ out front informs inquiring tourists, “We don’t open until 11:30 a.m., please stop back.” I pause a second, that’s also the last place I saw poet extraordinaire and Dreamlander, Cookie Mueller.

Proceeding to the all England Club, which gives Abingdon Square its name, is an alluring park with tall trees lining a winding walk. British expatriates Tea & Sympathy and Myers of Keswick are around the corner. Like a passage from a romance novel, there’s some street love intersecting when Bleecker St. meets Hudson and Hudson takes the name 8th Ave.

Suddenly, lost in thought, my mood shifts. I remember a dark streak that ended with a heartbreaking low, and the remains of a love gone bust. It was a winter evening at Abingdon Square. Holding your head with streaks of red flowing in the snow, my heart would melt waiting for an ambulance. I trembled from the cold. I’ll never forget the distant gaze stretched across your face. We almost made it to your apartment.

The West Village starts to fade.

A few more blocks north, through the thick of idling Ubers, a surprise on the corner of W. 13th St., possibly the last gas station in New York City.

Time to take a breath and get ready to grapple with the foot traffic at 14th St.—mostly tourists on their way to the nearby High Line. The street’s packed with trends: engaged fidget spinners, long dresses cut in half to display shorts, and logo heavy t-shirts, proving an ongoing existence of bad fashion and faulty DNA.

I loop back to Horatio St. to end my slow marathon and take a break, seeking a quiet oasis to sketch the ornamental fountain in Jackson Square Park. This is strange, but I just saw another bulldog. This time it’s an original English bulldog being walked by a triple-chinned, wobbly man, and my best response to this is to crack a smile.

Not seeing many smiles these days.