I Was a Teenage Zombie From Outer Space

The cannibal in me says no brains but the gourmand says more garlic. 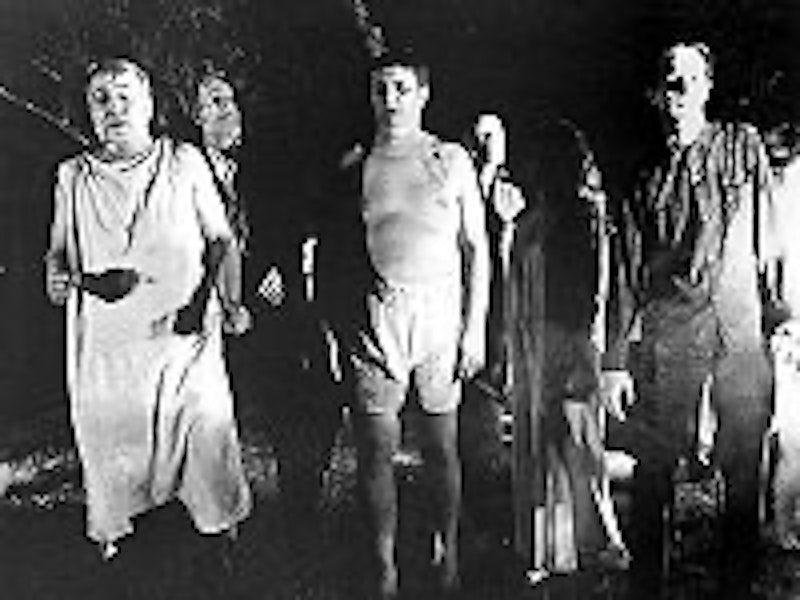 Since the recent death of George Romero, the original Big Daddy director of the Zombie movie market, I’ve considered zombies and the role they play in our polite society. Zombies are PC now, with way too many cable series and films to ponder. White Zombie, the 1932 classic starring Bela Lugosi, was the first of hundreds of movies starring the undead. The genre marches on. Like the mass appeal of vampires, zombies are an easy taboo target, filled with fear and repulsion. They’re revered and respected ghouls of the celluloid monster realm, and darlings of the box office. Romero’s Night of the Living Dead premiered in 1968 on a budget of around $100,000. Today the franchise has made untold millions. With the daily horror of modern times, zombies are the undead cinema clowns that take the edge off anxiety, stress, tension, and disbelief of the “fake” real world we view. Their subtle subliminal messages question where we draw the line between art vs. farcical comedic low-budget schlock.

The symbolism in Romero’s films, whether intentional or not, is an example of Middle America’s mindset. A subversive disillusionment with the police state, politicians, the military/industrial complex, blatant racism, the disintegration of the traditional nuclear family, religious hypocrisy, and the mistrust of government authority on every level. In 1978’s Dawn of the Dead, there’s a scene on the roof of a shopping mall where survivors of a zombie apocalypse watch the living dead sleepwalk across the vast parking lot heading to the mall entrance. Someone on the rooftop poses the questions, “What are they doing? Why do they come here?” The reply is, “Some kind of instinct… Memory…what they use to do… this was an important place in their lives.” Like sheep with buying power, the zombie mentality represents the average consumer who believes what they’re told, no matter how far-fetched or unreal. There are no leaders in the zombie ranks.

Zombies have no secrets, and the living have too many. The self-indulgent addictive personalities, making due with other self-absorbed, entitled, privileged buffoons. People are complex in their wants, needs, and desires. Zombies are single-minded in their goal. Their agenda is to eat brains. Fresh from living heads, warm, juicy, brains …nothing more. They don’t worry about taxes or getting it on with other hot looking zombies. They don’t need stimulation, medication, or a stiff drink. No misunderstandings or disagreements. Just eating brains. Pretty easy lifestyle for zombie folks. Brain addiction is the only setback. The cannibal in me says no brains but the gourmand says more garlic.

There are many biblical references to zombies along with Romero’s quote, “When there’s no more room in hell, the dead will walk the earth.” A telling statement that fits in with these modern wild and crazy days. Glad, sad, or happy, we stand alone, a party of none. Checking in or out, early or late, we zombies cakewalk into town. It doesn’t matter if you lock your doors, barricade the windows, stockpile heavy automatic weapons and plant booby-traps to catch the unsuspecting stray zombie who wants nothing more than you for a little snack. They go to the beat of a different bummer.

Don’t fear the dead, they can’t hurt you. Unless they come back to life with a big appetite. “The neighbors are scary enough when they’re not dead,” is another Romero quote that may sound off the wall and anti-social but it’s very telling. How well do we really know our neighbors? The guy next door could be that serial killer they’ve been looking for. That other guy who’s always barbequing and firing up his smoker in his backyard could be that cannibal who makes sausages that we hear of in urban legend. Zombies are so misunderstood, like junkies, religious zealots, alcoholics, gamblers, over-eaters, sex addicts, over-achievers or sports fanatics who can’t get enough of that funky stuff. The zombie has one mission, to wander the earth with his gang of corpse buddies and wreak havoc on the living.

Zombies have been around since the eighth century, originating in the African Congo and travelling to Haiti and Louisiana Creole populations. People who died and are then brought back to life without free will. They’re slaves to reality. The zombie reduces us to the consumer meat market of slave society as food for thought. Some of the more memorable zombie flicks are Biker Zombies, Big Tits Zombies, Bloodsuckers from Outer Space, Chopper Chicks in Zombietown, Dead Clowns, I Was a Zombie for the F.B.I., Redneck Zombies, Space Zombie Bingo, The Stink of Flesh, and so on. Whether it’s an infection, virus, or from outer space it’s all zombie, all the time. Zombies are the terrorists of the new world order. The blind leading the blind at the all-you-can-eat buffet.