What I Learned at Death Camp

We must beat cultural appropriation the way the LAPD beat Rodney King. 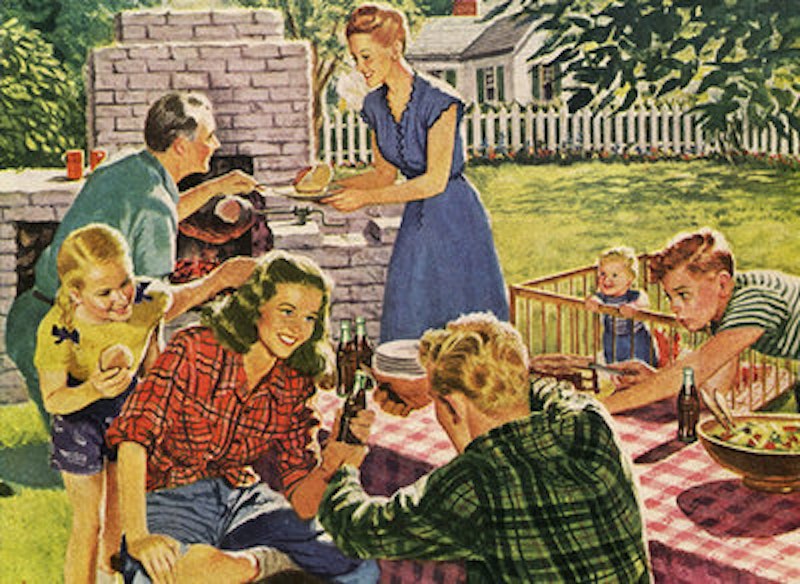 It's been an awesome summer here at Camp Funtanamo! I’d like to express my gratitude to my captors. Oh Funtanamo, nestled here among the hills of [redacted]. Unless otherwise instructed, I’ll always remember its lake, where we spent so many summer days water-boarding, its bunks decorated with such restraint. And of course, like you I bet, I'll never forget the “oven” [laughter]. No seriously, my confession, though forced, is perfectly sincere. I am a straight cis-gendered white man, and now I'd like to share with you what I learned here about how people like us can stop being oppressors.

Cultural appropriation is one big problem that they taught us about here in pain camp. People like us are always swiping stuff from “others,” whether it's sequences of tones, cool outfits, or slang. Cultural appropriation is worse than evil, it's inappropriate. I learned that “the hard way,” but perhaps my experiences can be of service. It shouldn't take you, like me, all those sleepless nights; it shouldn't take aversion therapy with Katy Perry videos and electrodes. But the hard way, as we sing here around the fire, is the Funtanamo way.

After we arrived together at summer camp on that cattle car [laughter], I was in a hole both metaphorical and all too actual, and I learned how less-than-appropriate it is that we cis-gendered white male straights are slumming in your ghettoes, pretending to groove on your stuff, listening to your music in a simulation of appreciation and then swiping it and exploiting it. We must beat cultural appropriation the way the LAPD beat Rodney King.

Here at pain camp, we’ve been dressed in white clothes, taught white values and how to walk like a white person (I profoundly regret the pimp-strut I was rolling in 2011). It's going to be strictly Dick Cheney, Calvin Klein, golf, and polka for me from now on; I’ll seek to nourish the white person within and without with white people food. I regret the hunger strike, and appreciate the force-feeding. Non-privileged people own their own stories, and I'd prefer to have no knowledge of them whatever; then there's no way for me to appropriate their experiences. Apart, we can overcome the nightmare of oppression.

But that still leaves us with the disturbing possibility of chance encounters, and hence of micro-aggressions. The counselors here at rape camp pointedly emphasized that part. I really wanted, really needed every lesson they taught me. I used to assume that gay guys could give me advice on interior decorating; I used to be “interested” in different hair textures or “funky” body sizes. I thought I meant well; they taught me differently here at this idyllic facility.

What's so difficult about micro-aggressions is that they're as unconscious as a Funtanamo camper after interrogation. We white male cis-gendered straight people don't know we're doing it, which makes it hard to stop. The key is to become conscious, indeed morbidly self-conscious. Best not to communicate with other sorts of people at all, of course, but that’s not always practical, so we should speak in the most stilted, constrained way, offering only the most cryptic and laconic remarks, and only when there’s no other option.

With other cis-gendered straight white male Baby Boomers, I’ll be my natural, free-wheeling self; I'll sashay boldly forth and make mistakes. But when I'm talking to anyone else, I'll read from the script the staff taught me. That's what I learned this summer in death camp.

It's a good thing that the terrible systemic injustices in education, incarceration, income, policing, and life expectancy have been ameliorated, so that we can focus on the real throbbing heart of racism: white people acting all hip-hop. I see that now; I really do. When you get right down to it I'm more comfortable among my own kind anyway. The most important lessons, in pc camp as in life, come in strokes of pain.

On days like this, people say they'll keep in touch, despite the PTSD. But I think we really will, whether we know it or not, because the staff will be watching us all. So don't fuck up! [laughter].