The day I got to stand outside MTV Studios during TRL, they had a crappy band. 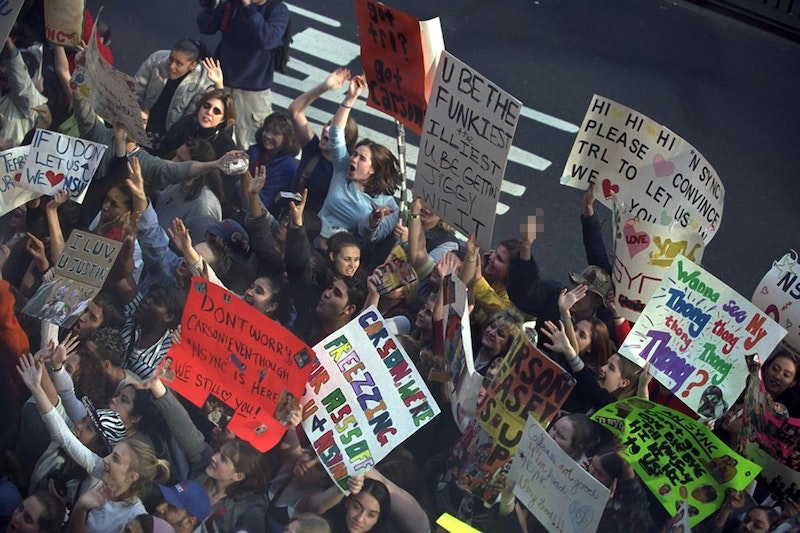 New York City felt like an imaginary world that only existed in my mind. It was an Oz that offered a colorful alternative to the dull black-and-white world of Smalltown, USA, where nothing ever happens. It was the promised land for young writers, painters, and actors who wanted their voice to be heard. Every major cultural event happened in NYC. Yet because of a combination of bad choices and uncontrollable circumstances, I never moved there to pursue my dreams, so the city was always more of a wish than an option.

I did go there once. After graduating high school in 2001, Mom and I celebrated by spending a weekend in Times Square, a lifelong dream for both of us. We took a train from DC, and after three hours we saw the Twin Towers outside our window, confirming that this place was real and not a fantasy land. We got off the train at our destination and took a cab to the Marriott Marquis in Times Square. When we arrived, the hotel doorman opened our door and said, “Welcome to Times Square.”

I thought DC and Baltimore were big cities, but New York made them look like small Midwestern towns by comparison. Marquees flashed animated advertisements on every building. The crowded sidewalks bustled with people trying to dodge each other like objects in an obstacle course. Even the stores were supersized; you could get lost for hours in the Virgin Megastore browsing through CDs and LPs that your local mall music store didn’t have.

The first thing I wanted to do once was stand outside MTV Studios for TRL. TRL was my generation’s American Bandstand. It was the show to watch for the latest in pop music, and if you were lucky, Carson Daly would pick you out from the crowd outside to come inside for the show. That day saw a good-sized crowd outside, but not as big as what I’d seen on TV. From where I stood, I could only see the sky reflected in the windows. I didn’t know when Carson was waving to us until everyone started screaming.

“Does anybody know who today's guest is?” someone in the crowd asked.

“I think it’s Eve 6,” another person replied. The one day I get to stand outside MTV Studios during TRL is the day they had on a crappy band.

The most interesting part of Times Square is the people on the streets. A black man dressed as Superman sold sunglasses to people passing by. A man painted in silver stood still for a minute making everyone think he was a statue until he moved to his next position. A Hare Krishna sold me a booklet about his faith just a few blocks away from an evangelist warning New Yorkers to get right with Jesus. I didn’t see the Naked Cowboy, though.

We saw a t-shirt in a gift shop that said, “I survived a New York City cab ride,” which sums it up perfectly. Most cab rides were uneventful, but there was one that made us feel like we were in The French Connection. The driver weaved in and out of lanes and stomped on the gas petal whenever there was space on the road in front of him. Mom and I grabbed onto anything we could. When we finally got to our stop, we were thankful to be alive and wanted to do it again at the same time.

Macy’s wasn’t bad; it just felt like a giant mall, although it did have the original wooden escalators. The View Restaurant & Lounge atop the Marriott Marquis was more memorable. We watched the New York City evening skyline slowly spin around us as we ate; everything was so calm and serene, a complete opposite of the panic I’d see on TV on 9/11. There was so much history left to explore, but it was impossible to see everything in one weekend. I vowed to come back someday, whether as a tourist or a resident.