When you can't sleep, you walk and write. 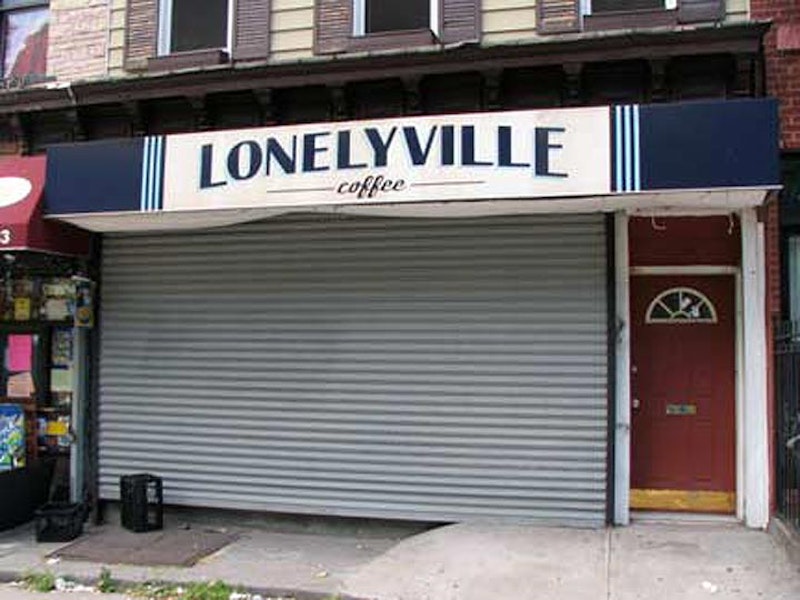 This now-shuttered coffee shop on Prospect Park Southwest reminded me of something. I mostly rove with the camera by myself, though I do tours for my website and the Greater Astoria Historical Society that have accommodated between 30 and 60 people. I have few vices, but one is selfishness with my time. I like to follow my own agenda when I’m out with the camera—I can go for miles in the heat without ducking into a Starbucks, and in the winter months, I make sure I don’t drink a lot to avoid running for a bathroom. More than one person has asked to accompany me on these jaunts, but frankly, I don’t want to have to take up time doing things other than pointing the camera and shooting.

I was in Windsor Terrace in Brooklyn. The area’s easily defined: it’s that narrow strip, about eight or nine blocks at the widest, between the vast greenswards of Green-Wood Cemetery and Prospect Park. Prospect Park West (which 9th Ave. is inexplicably called here—the stretch doesn’t border the park) is its northern boundary with Fort Hamilton Parkway the southern. Originally Windsor Terrace proper extended from Vanderbilt St. south to Ft. Hamilton Parkway and was a northern extension of the town of Flatbush, but after Flatbush was annexed by Brooklyn in 1894, and Brooklyn was then consolidated with NYC in 1898, just about all the territory “between the green” is included.

The neighborhood—named for Windsor, England—was built up by developer William Bell between 1849 and 1851 between Vanderbilt St. and Greenwood Ave., and row houses sprang up on 16th St. and Prospect Park Southwest by 1905. Windsor Terrace was heavily Irish in the early-20th century, and remains a quiet, relatively undiscovered neighborhood despite the construction of the Prospect Expressway from 1953-60; thankfully, a proposal to extend the expressway south along Ocean Parkway—which would’ve become a six-lane expressway—was never acted upon. 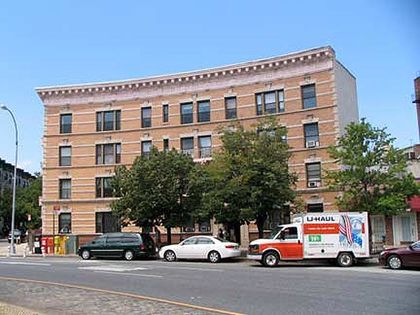 Windsor Terrace begins, and Park Slope ends, at Bartel-Pritchard “Square,” on 15th St., one of three traffic circles surrounding Prospect Park. The square was named for Emil Bartel and William Pritchard, two young Brooklyn natives who were killed in combat in World War I. Its most striking feature, perhaps, is the curved contours of the brick buildings surrounding it. 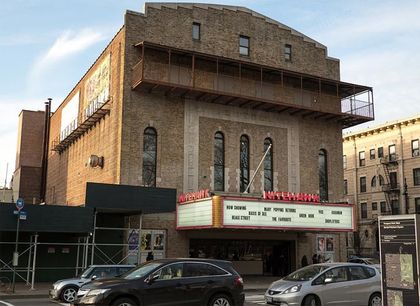 Adjoining the square is the multi-screen Nitehawk Theatre. It was formerly known as The Pavilion, which opened in 1996, when I saw Independence Day there. However, the building is much older: This theater dates back to 1908, when the brothers Harry & Rudolph Sanders opened a nickelodeon called the Marathon on the site. Rapidly expanding into adjacent storefronts, the Marathon developed into a theater of 500 seats. In 1928, the owners replaced the Marathon with the entirely new and self-named Sanders Theatre, tripling their seating capacity to 1581.

When the Sanders finally closed in 1978, plans to convert it into retail or residential space never bore fruit. In 1993, exhibitor Norman Adie and three local investors bought the property. In 1996, they re-opened it as the Pavilion Theatre with three screens. Five more have been added since. It quickly gained a reputation as a fleatrap and one of the worst places to see a movie in Brooklyn; it reopened as the Nitehawk in 2018 as one of NYC’s few movie houses with a liquor license. 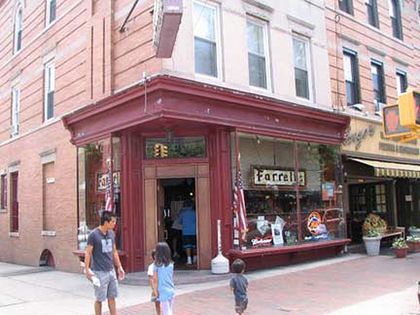 Some say that Windsor Terrace begins at Farrell’s, the venerable (1933) institution at Prospect Park West and 16th St., where, despite what the neon sign says, there hasn’t been a grill for years, though you can get corned beef sandwiches  on St. Patrick’s Day. There’s no table service—you drink at the bar. If you were female, you didn’t drink at the bar until 1972, when Shirley MacLaine swept in with her then-boyfriend, Park Slope’s Pete Hamill, and demanded service, ending the outdated tradition. 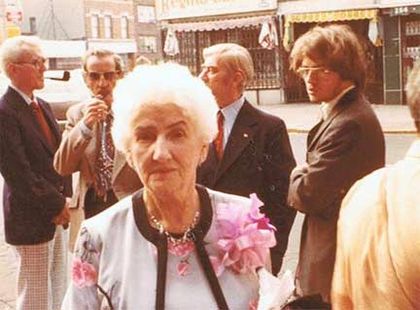 For many Windsor Terrace guys, Sundays mean Holy Name of Jesus Church at Prospect Park West and Prospect Ave. in the mornings, and Farrell’s in the afternoon. The Gothic Revival church, and the school behind it, are both massive; the church dates to 1878 and the school to 1923. In 1978, I attended my cousin Jim’s first marriage here. I’m on the right in the picture. My uncles Tom (with his ever-present pipe) and Jim are on the left, my grandmother Catherine in the middle, and my father Kevin W. next to me. Regina Bakery, across the street, is still there. 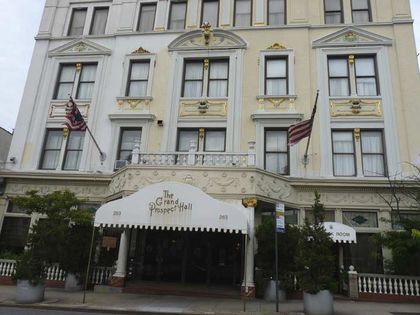 Prospect Ave. is the spine of Windsor Terrace, running from 3rd and Hamilton Aves. southeast and south to Ocean Parkway. It’s named for nearby Prospect Park and its high hills (left by a receding glacier at the end of the last ice age), though Brooklyn’s highest point is actually in Green-Wood Cemetery. As a neighborhood, Windsor Terrace occupies a narrow band between the cemetery, which was surveyed in the 1830s and opened in 1838, and Prospect Park, which was conceived by President of the Brooklyn Board of Park Commissioners James Stranahan, designed by Central Park landscape architects Frederick Law Olmsted and Calvert Vaux and opened in 1867.

The French Renaissance Grand Prospect Hall, 263 Prospect Ave. just south of 5th, is familiar to NYC viewers from its ubiquitous commercials: “We make your dreams come true!” It was constructed as a grand banquet hall in 1892 by John Kolle, who hired Ulrich J. Huberty, the architect of Prospect Park’s Tennis House and Litchfield Villa. The interior is ornate. William Jennings Bryan, Enrico Caruso, Lena Horne, Fred Astaire and Al Capone were all patrons; the Jack Nicholson vehicle Prizzi’s Honor was filmed here. The Hall has been under the ownership of the Halkias family since 1982.

I’ve never been inside, but was once invited to a wedding here—and the invitation was later rescinded, when the bride explained she had gone over budget and had to pare the guest list! As it happened I was in Park Slope the day of the wedding and went by Prospect Hall in a friend’s car and saw her in her gown outside the building. (The newlyweds, who moved to New Hampshire decades ago, later had me over for dinner as a consolation prize.) 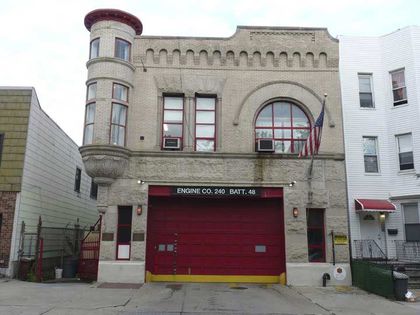 Engine 240/Battalion 48 on Prospect Ave. south of Greenwood Ave., is one of Brooklyn’s and NYC’s more exotic firehouses, with a corner turret with intricately carved stonework. The Romanesque Revival firehouse was constructed in 1891, when Engine Company 28, now 240, was in the Brooklyn Fire Department. 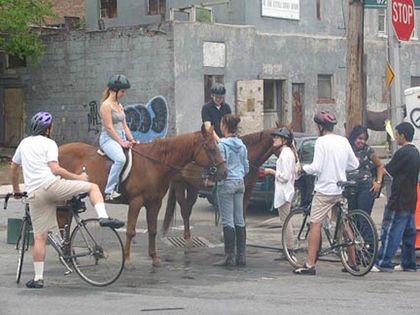 Crossing the Prospect Expressway at Ocean Parkway over a pedestrian bridge, I wound up in Kensington, and passed the still-active Kensington Stables at E. 8th Street and Caton Pl. Some of the Dobbins were in the street ready for a Prospect Park outing. Kensington Stables is the last stable remaining at an intersection that was once home to several such enterprises. In their heyday, at the beginning of the 20th century, hundreds of horses were housed there. But the Depression and the automobile transformed horseback riding from a necessity into a hobby, one soon overtaken by other leisure activities.