To the Heights of Harlem

Quite reasonably, the Americans behaved as untrained troops have always behaved: they ran like hell. 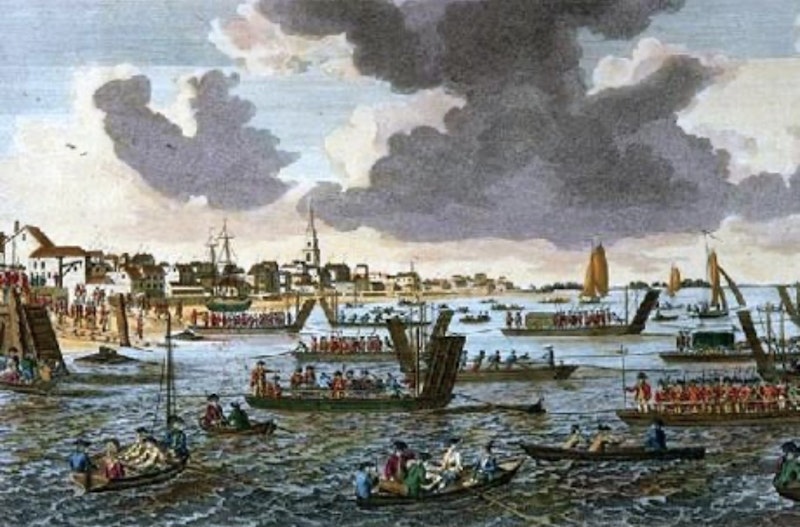 If warfare were boxing, Sir William Howe had George Washington on points by early-September, 1776. He’d driven the rebels off Long Island in eight days. Sir William paused, spending two weeks in peace negotiations with John Adams and Benjamin Franklin at Colonel Christopher Billopp's mansion at Tottenville, Staten Island, now called Conference House. As Howe's secretary wrote, "They met, they talked, they parted. Nothing now remains but to fight it out..."

Washington had deployed 5000 men below Chambers St. in lower Manhattan; 5000 along the East River; and 9500 on Harlem Heights, the bluffs running from the Hudson at 135th St. through Point of Rocks at 127th St. and St. Nicholas Ave. to the Harlem River at 155th St. On September 12, Washington received the authorization of Congress to withdraw from New York City. The army began moving supplies to Harlem Heights via the West Side's Bloomingdale Rd. and the East Side's Post Rd.

September 15, 1776 dawned bright and clear. It soon became hot and muggy. The Americans had no cannon at Kips Bay. Most were untrained militia, some in service for barely a week. Those without muskets carried pikes (scythe blades fastened to a pole). They hadn’t been fed in 24 hours. Most had been on duty all night.

The British had assembled landing barges—big 16-oared rowboats, each capable of carrying 50 to 60 men—in Newtown Creek, just across the East River. Seven battalions of Redcoats and three battalions of blue-coated German mercenaries—between 2500 and 3000 men—boarded them. When ready, they began rowing toward Kips Bay. At 11 a.m., the five warships gave the Americans a full broadside. Eighty-six cannon balls went sizzling into the trenches, followed by volley fire—single shots, one after the other, so at least one cannonball was in the air at all times. Within minutes, the shoreline was fogged over with black powder smoke. The British and Germans landed and formed. Then the drums began beating, and, marching in cadence, closed up with lines dressed, they advanced out of the smoke in superb order.  Quite reasonably, the Americans behaved as untrained troops have always behaved: they ran like hell.

Howe's men fanned out with "clockwork competence." By noon, his left, Hessians under Colonel von Donop, held a line from the East River at 23rd St. to Sunfish Pond around 27th St. and Park Ave. Lieutenant General Lord Cornwallis' Guards and Grenadiers held the center, a convex curve from the Sunfish Pond to Inclenberg (now Murray Hill, as far west as Madison Ave. at 34th St.) to Lexington Ave. and 40th St. Brigadier General Leslie's light infantry held the right from 40th St. to the East River.

From 2 p.m. until 5 p.m., Howe ferried an additional 9000 men across the East River. Sir William, a competent commander at all times, was concentrating his command within the perimeter before advancing to his objectives. This is a foolproof rule for conducting a successful water-borne infantry landing.

But Howe hadn’t anticipated the Americans' sudden collapse. So he’d not planned to rapidly advance across Manhattan, river to river, cutting off the Americans in lower Manhattan and dividing Washington’s forces. He’d not prepared for sudden victory.

When the bombardment began at Kips Bay, Washington and his staff rode for the sound of the guns. He galloped to a crossroads near 42nd St. and 5th Ave. There he found his militia running uptown. This shocked him. He saw no British skirmishers or signs of pursuit. He received reports from his officers and issued orders. Meanwhile, a fresh American column had come from the West Side. He ordered its commanders to form a battle line at the crossroads, near a farm. As the officers began moving their men, the formation suddenly fell apart and the soldiers began running away. Washington rode up and down the line, trying to rally them, shouting, "Take the wall! Take the cornfield!" pointing to the farm. Then some 70 redcoats, General Leslie's light infantry, appeared on Inclenberg about a quarter-mile away. The remaining Americans now took to their heels.

Washington went berserk with rage. His extraordinary temper was no less powerful for his heroic, life-long struggle to control it. An innate power of profanity was enhanced, as farmers' tend to be, by varied, forceful, and quite imaginative cloacal and venereal expressions. When Washington was in full cry, as one eyewitness wrote, "the very leaves shook on the trees." Now he tore off his hat and flung it to the dust. He cursed violently, roaring that his soldiers were not men at all but scum, and that the war itself was impossible with cowards for soldiers. He slashed at them with his riding crop, even beat at them with the flat of his sword.

None paid any attention. Within 10 minutes, Washington and his aides stood alone on a road littered with equipment—muskets, powder horns, hats, knapsacks, coats, and canteens—dropped by his men to speed their passage. They ran all the way to McGown's Pass (on the Central Park's East Drive, a few hundred yards west of 5th Avenue and 106th St.).

Exhausted by rage, Washington slumped in the saddle, staring dazedly at the ground. His aides waited, silently, until the British infantry had advanced nearly within musket shot. Then one of them took the bridle of the Commander-in-Chief's horse and gently led him away.

By midday, Washington had ordered General Israel Putnam to evacuate the downtown troops up the West Side to Harlem Heights. A short, stocky 58-year-old veteran of the French and Indian Wars, Putnam was nearly uneducated. He knew little of logistics or strategy. But Old Put was energetic and enterprising, a superb horseman, a natural battlefield commander, worshipped by his men for his roaring ways and “deliberate fortitude.” Within three hours, his newly-assigned and highly competent chief of staff, Captain Aaron Burr, had ensured that every command in lower Manhattan had received evacuation orders.

Burr had been on Washington’s staff for 10 days before his reassignment. It had been a case of mutual dislike on sight. But Putnam liked and trusted Captain Burr, who could charm even a tough old cavalryman, and Burr responded with loyal affection, respect, and efficient hard work.

By 4 p.m., the army was marching north in a column straggling some three miles from 23rd St. to Chambers St. Putnam kept them moving, galloping up and down the line, roaring at the men to keep up the pace. Roughly speaking, they marched up 8th Ave. to Columbus Circle and onto the Bloomingdale Rd. (today's Broadway as far as 105th St.) to Harlem Heights.

Meanwhile, the British marched north along the East Side’s Post Rd. toward McGown's Pass, little more than the breadth of Central Park away. They didn’t know the Americans were marching up the West Side. Washington posted Colonel William Smallwood's Marylanders across the Post Rd. at 96th St. and 5th Ave.  Largely old hunting buddies who had gone to war together, they waited for the British to come within range and then laid down heavy, accurate fire.  The Redcoats, caught surprised by resistance, paused and then returned fire. The exchange continued until, learning through one’s of Burr’s aides that Putnam’s command was safe, the Marylanders made an orderly withdrawal.

Two days later, at dawn on September 17, Colonel Thomas Knowlton and 120 U.S. Rangers—superb fighting men then as now—slipped to Morningside Heights, where Columbia University, Barnard College, and the Cathedral of St. John the Divine now stand. The Redcoats spotted them near a farm on 106th St. between West End Ave. and Riverside Dr. Their pickets fired an alarm, summoning a column of some 400 infantrymen up the Bloomingdale Rd. Knowlton dispersed his men along one of the farm's stone walls and ordered his men not to show themselves or fire until the first British soldiers reached a spot on the road about 50 yards south. The Redcoats swung briskly past the mark, Knowlton gave the order, and his men let them have it.

For half an hour, they shot it out, “practically face to face.” Then, roaring drums and skirling bagpipes signaled the advance of the Royal Highland Regiment of Foot, the Black Watch, kilts and all. Knowlton ordered his men to fall back, each firing in turn to cover one another's withdrawal. As Knowlton's men reached the area beneath today’s 125th St. I.R.T. station, a British bugler near Grant’s Tomb “put his horn to his lips and blew the fox hunter's signal for the end of the chase, of a fox gone to earth,” signaling that the Americans had run away—again.

Washington, a fox-hunting man, grasped the insult. He ordered Knowlton to take the Rangers and three rifle companies and seize the rocky rise now occupied by the General Grant Houses, near Broadway between 123rd and 124th Sts. Other troops, commanded by Lieutenant Colonel Archibald Crery, would distract the British by skirmishing in their front. Thus began the Battle of Harlem Heights.

Knowlton was leading from the front, as usual, when a British marksman took him down around 11 a.m. The Rangers launched a ferocious attack to avenge him, and Crery’s men joined in.  The British fell back about a quarter of a mile, to a buckwheat field near Broadway between 119th and 120th Sts. Then both sides began slugging it out. The American line stood from Riverside Church to Teachers College, just north of 120th St. The British were about a block south, strung along 119th St., with reinforcements dribbling in: a company of Hessian riflemen, a battalion of Hessian grenadiers, the Black Watch, and two artillery pieces.

Around 2 p.m., the Americans began advancing. Suddenly, for the first time that day, the Redcoats withdrew, “rather abruptly.” Some Americans, “made reckless by the sight of Highlanders and the British on the run,” chased them to 111th St. before obeying Washington’s orders to break off the engagement. Then the shooting stopped. The rebels, realizing that, for the first time in the campaign, they had licked some of the world's finest soldiers in a stand-up fight, began cheering.

The pressure off, Washington withdrew his army north to safety in White Plains. Six years later, on November 25, 1783, he’d return to New York City, triumphant on a white horse.