Dickens was a spiritual forefather to another idiotically sentimental Englishman, John Lennon. 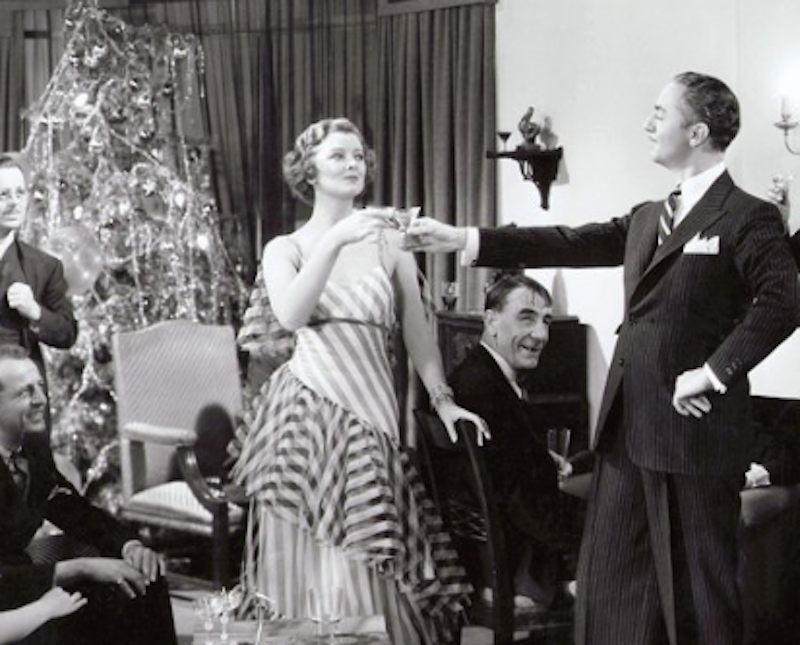 The dwarves of the Moronosphere are posting their favorite-Christmas-things lists all over the place. Yesterday, as Brother Aiden and I reclined in our dining room (which we half-jokingly call the “refectory” in a nod to our semi-monastic Benedict Option lifestyle), with several hours to spare while Mother and Sister Marie, taking advantage of the thaw, dug down to expose and patch the leaking flank of our septic tank, we discussed what sorts of lists we’d each compose, if someone forced us to do it.

The Thin Man. Yes, the immortal 1934 movie that initiated the Nick-and-Nora detective franchise. It’s set at Christmas. And set in New York City, that American city that’s the most closely associated with what secularists call “the holiday season.” Myrna Loy is handsome; William Powell is in his physically beautiful prime.

When Powell puts Loy in a taxi and sends her off to Grant’s Tomb to get rid of her, I always wonder whether a latter-day New York cabbie would even know where that monument is.

A Very Murray Christmas. A charming trifle from a director who, it turns out, is the daughter of Francis Ford Coppola (one wonders what lengths she must have had to go to to “break into” the film business). And starring Bill Murray, an actor I’d never heard of before but whom I think I like. Murray, who plays himself, finds himself snowed into New York’s Cafe Carlyle on Christmas Eve. Mirth ensues, much of it musical.

As it happens, I was also once snowed into the Cafe Carlyle, though not at Christmas and not with Bill Murray. It was in February, and the luminary in question was Bobby Short, the immortal cabaret singer who maintained a decades-long residency there.

A young man at the time, visiting New York, I’d been “stood up” by the gentleman, a wonderful curator at the Whitney Museum, whom I’d arranged to meet at the Carlyle. (It turned out that a blizzard-related emergency had kept him away.) After Short’s show, feeling blue, I parked myself at the bar to fortify myself before the trudge through the whiteout back to my own, cheaper, hotel. (The Hotel Carlyle itself was “above my pay grade” then as it is now.)

Right after I ordered, I heard a familiar voice say, “I’ll have what the cat in the sandals is having. Hey man, even with those wool socks, aren’t you cold?” I turned to find Short himself seated down the bar, slumped with post-performance weariness and his bowtie askew.

What followed was one of the most fascinating conversations with a celebrity that I can imagine having. At this point I was moving away from my family’s Methodism and into conservative Catholicism, and doing a lot of reading in the right-wing intellectual tradition, both secular and religious. Short turned out to be well-read in G.K. Chesterton, the Italian philosopher Augusto Del Noce, Harvard professor Adrian Vermeule, and other leading right-wing intellectuals, and was able to converse about them with insights. He was even concerned about liberalism’s descent into “soft totalitarianism.”

A night to remember!

Benjamin Britten’s A Ceremony of Carols. Sheer musical enchantment! More specifically, a work of art that re-enchants our dis-enchanted modernity. Eliot’s religious poems serve the same function for me. (It occurs to me that Britten set Eliot’s “Journey of the Magi” to music.)

One thing that’s definitely not on my list is A Christmas Carol. Brother Aiden and I watched the 1984 George C. Scott version while “the girls” were scraping suet off sheep bones for this year’s Christmas pudding. What sentimental garbage, and almost completely empty of Christian content. Cloying humanistic claptrap. Dickens was a spiritual forefather to another idiotically sentimental Englishman, John Lennon.

No matter. Now more than ever, as a decaying neo-liberalism exerts its death-grip over our institutions and Christianity dies in the West, may God bless us, every one!