Walking the Boulevard of Death, aka Queens Blvd., in the days before Christmas 2020. 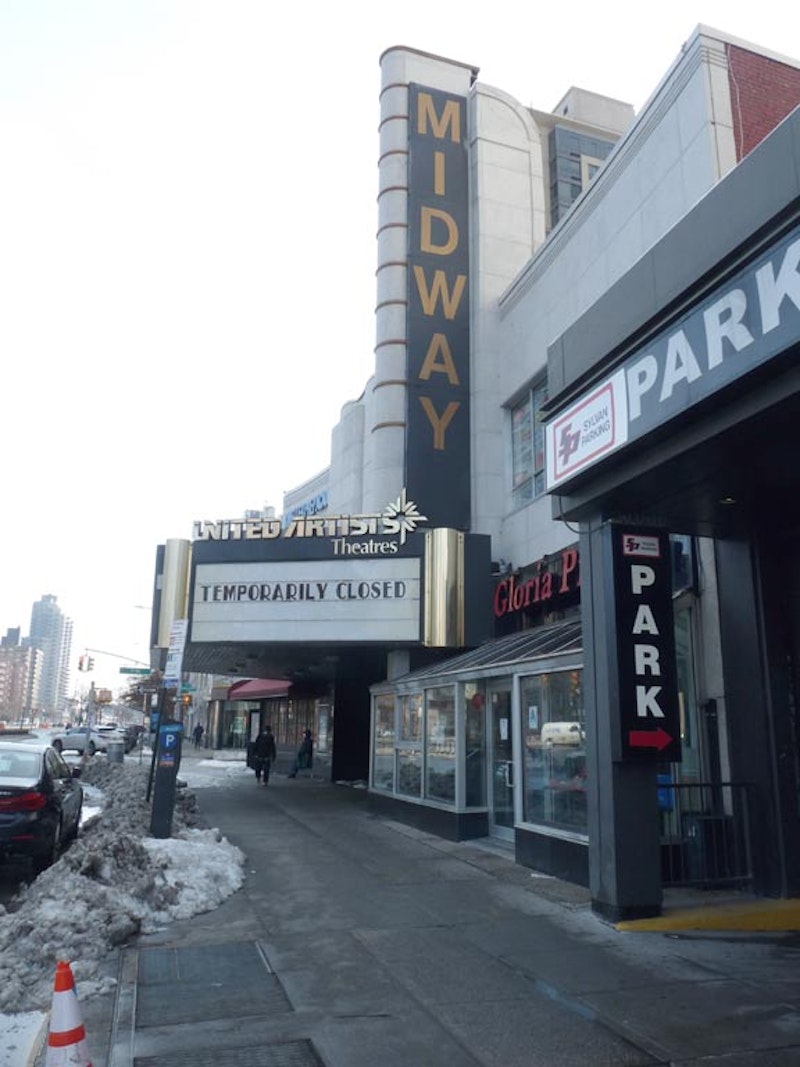 In the days before Christmas I set off down the Boulevard of Death, aka Queens Blvd., for a walk. Queens Blvd. attained its 10-lane width in the 1920s and 1930s and its take-no-prisoners traffic spelled the end of the line for dozens of pedestrians before calming measures such as bicycle lanes, lengthier “walk” times at crossings and fencing preventing jaywalking helped alleviate things somewhat.

On this journey I began in Forest Hills and skirted the neighborhood of Kew Gardens. The neighborhood was inspired in layout by the London suburb that gave it its name. It was conceived and developed in the 1890s by Manhattan lawyer Albon Platt Man and later by his son, Alrick Man, and features block upon block of Spanish Colonial, Italianate, Dutch Colonial, Tudor, and Japanese-style homes, as well as a cluster of apartment complexes in the vicinity of the Kew Gardens LIRR station.

The Midway motion picture theater, built in a distinctive Streamline Moderne style, was built at 108-22 Queens Blvd. It was named for the WWII Battle of Midway and opened the same year, in December 1942. An interior remodeling in 1997 stripped it of its original furnishings, but the old exterior is still intact.

Its neighbor Gloria Pizza is a Queens touchstone as it was a beloved, high-quality pizzeria in Flushing between the 1970s and 1990s. The son-in-law of the original owner reopened it next to the Midway Theater in 2018. 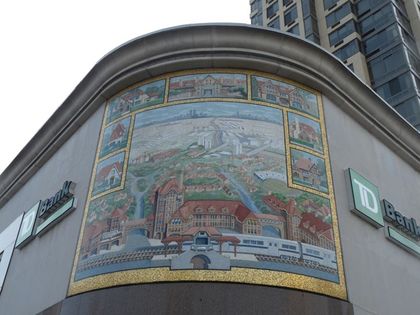 Muralist Richard Haas‘ work depicting Forest Hills Gardens has appeared on the bank on the southeast corner of Queens Blvd. and 71st Rd. since 1989. Haas, whose murals can be found at Chase Field in Phoenix, as well as courthouses, government buildings and department stores in Chicago, West Virginia, St. Louis and Munich, Germany, explained that he was attracted to Forest Hills Gardens because of its European garden model.

In 1909 Cord Meyer, the developer of nearby Elmhurst, sold 100 acres south of the Long Island Rail Road to the Russell Sage Foundation, which commenced to piece together a nearly self-contained community, Forest Hills Gardens, from 16 former truck farms throughout the 1910s and 1920s. Winding streets, Tudor brick buildings, and short, cast-iron streetlamps and street signs make the development unique in New York City.

The mural shows the Forest Hills Inn, Station Square and a passing LIRR train in front, depictions of separate Gardens buildings in panels on the sides, and Forest Hills Stadium on the right and the Manhattan skyline, including the former Twin Towers, in the background. The bank is located on the site of the Stratton, a once-famed Forest Hills nightspot. 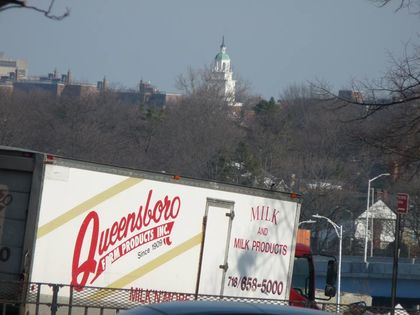 The tall tower of the Queens County Savings Bank, across Flushing Meadows-Corona Park at Main St. and 76th Ave., can be glimpsed from miles away in Forest Hills. This flagship of the QCSB was constructed in 1953 and was modeled after Independence Hall in Philadelphia. In fact, it has a Liberty Bell model in the lobby. 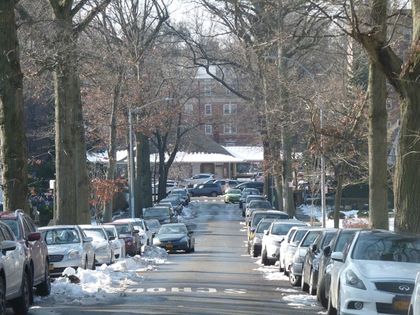 When Albon and Alrick Man developed Kew Gardens, many of the streets were given British-sounding names, and many have kept theirs such as Mowbray Dr., which stands in for 83rd Ave. between Austin St. and Kew Gardens Rd. A glance down the west end of the street reveals the Long Island Rail Road Kew Gardens station, a handsome, hip-roofed station building supported by Doric columns that opened in 1909 and replaced the Hopedale station, which was eliminated when the LIRR main line was rerouted. Charlie Chaplin lived on Mowbray Dr. during the years of his initial fame, 1915 through 1922. 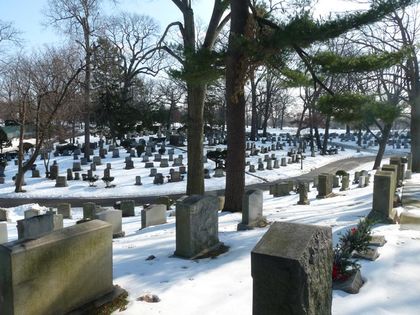 Maple Grove Cemetery, entered via two gates on Kew Gardens Rd., dates to a time when “burial parks” were beautiful, with ponds, winding streets, and grove of trees, not like today’s crowded graveyards. It was built along the lines of Brooklyn’s Green-Wood and Evergreens and The Bronx’s Woodlawn, though it doesn’t have the star power of any of those. In Maple Grove’s leafy lanes you’ll find singer LaVern Baker (“Tweedle Dee,” and “Jim Dandy”); Broadway composer Vincent Youmans (No, No, Nanette, “Tea For Two”); Jamaica and Hollis Hills developer Frederick Dunton; and George Washington Johnson, the first successful African-American recording star.

The Cemetery was established in a then-rural area of Queens in 1875 by a partnership headed by Colonel William Sterling Cogswell. Land was purchased from the Webb family. As of 2020 there were over 80,000 interments, still a far cry from Calvary Cemetery further west, whose “guests” number about three million. 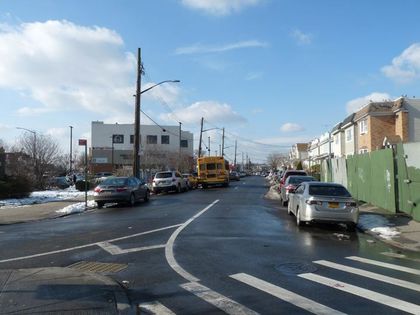 At the end of Kew Gardens Rd. at Jamaica Ave., Metropolitan Ave. also meets the end of its route. Metropolitan Ave. is one of the lengthiest roads between Brooklyn and Queens. It was first built in 1815, give or take a year, as a toll road and was known along much of its length as the Williamsburg and Jamaica Turnpike until the mid-1800s, when it was bestowed its current name. It runs from the East River to Jamaica Ave. and along the way, marks the southern limit of Newtown Creek, and runs through Lutheran/All-Faiths and St. John’s Cemeteries, as well as Forest Park. It’s the spine of several communities—Williamsburg, Middle Village (so named because it was midway between Williamsburg and Jamaica), and Kew Gardens, and forms the boundary line between Ridgewood and Maspeth. 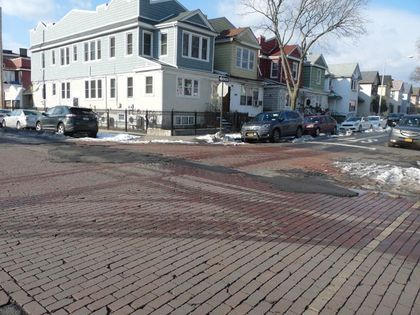 When I’m in this part of town, I like to check on 89th Ave., which is paved with red bricks between 144th St. and Sutphin Blvd. While the Department of Transportation is obsessive about replacing old signage and street lighting, it has thankfully left this red brick pavement alone, though various repair and construction companies cover it with asphalt when repairs have to be done to underground conduits. The pavement, as well as the neo-Federal attached houses along 145th and 146th Sts., were part of the Everett Park neighborhood developed by F.W. Scutt & Co. in 1915-1916, which is the date we can attach to the red brick pavement. 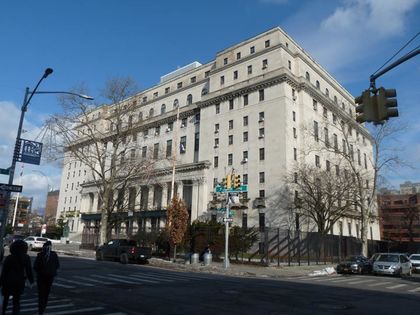 The last time I was called for jury duty, in 2015, I was told to report to the new Civil Court building on Sutphin Blvd. and 89th St. On this occasion, there was a special “treat” waiting for me because our case was going to be adjudicated in the older Queens Supreme Court Building north of the Civil Court.

This building that looks older than it actually is. It was built beginning in 1936 and wasn’t finished until 1942; the first case was held in the building March 7, 1939, just a month or so before the first World’s Fair opened in Flushing Meadows. The architects were Alfred Eccles and William Knowles who, with Dwight James Baum, had previously designed the Flushing Post office on Main St. The building was partially funded via a $2.2 million grant from the Works Progress Administration out of a total cost of $4.8 million. It was built in a classical style with eight massive Corinthian columns flanking the entrance, whose doors have depictions of historic lawgivers Hammurabi, Confucius, Moses, Manu, Gaius, Mohammed, Edward I and Grotius. 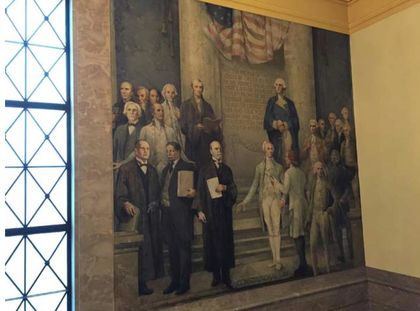 I didn’t take many photos of the interior since cops, many of whom dislike photographers, were around in numbers. I take a camera everywhere, though, and snapped two murals seen from the staircase featuring “Mosaic Law” and “Constitutional Law” (shown here) lawmakers. Figures from the 18th and 19th centuries appear side by side in the Constitutional mural, but don’t seem to want to have much to do with the other. Both murals are by Vincent Aderente, who also painted the Queens neighborhood murals in Flushing’s Main St. post office.