“Real” writers shudder at the mere mention of his name. 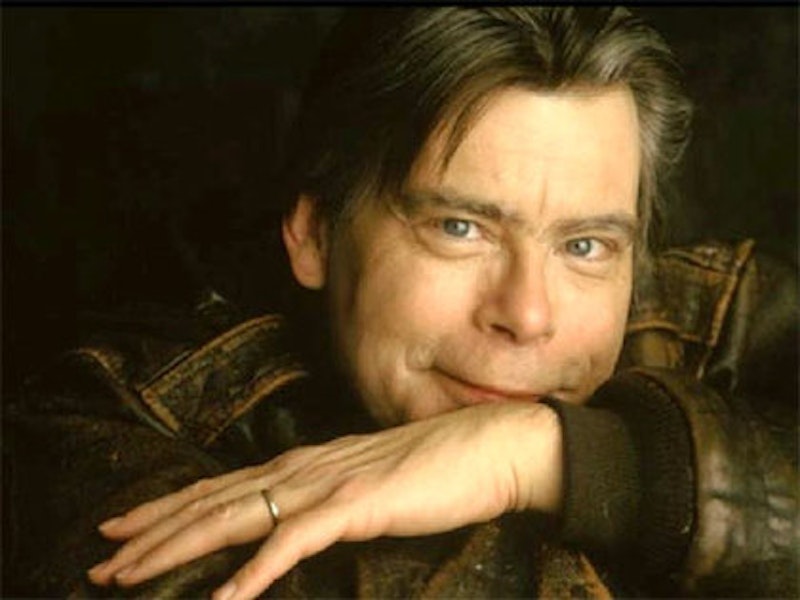 When I was in eighth grade, I picked up a copy of Stephen King’s Cujo at the local library. I was burned out on Judy Blume (up to and including Forever and Wifey, mind you…), had already read the bad-Catholic-school girl’s bible Flowers in the Attic by V.C Andrews, and was ready for something new.

Cujo had me by the throat. I couldn’t put it down, staying up late into the night in the bedroom of my apartment complex shared with two sisters, flashlight-under-the-covers style. The power of King’s language was a refreshing punch to my young gut. His humor and sarcasm! The suspense and fear! The delicious profanity! Sweet Jesus, I was in literary love. My dad happened upon the book and asked if he could read it when I was finished; 48 hours later, there was a knock on my bedroom door.

“Your mother and I have discussed it,” he said, almost sadly, “and you’re not allowed to read any more Stephen King books.”

This quarantine had the same effect Sister Saint Katherine’s loudspeaker announcement that we were forbidden from listening to Billy Joel’s song “Only the Good Die Young” had on my seventh grade class the year before: immediate accumulation, collection and digestion of the forbidden fruits. Just as I’d gone to the mall that day to buy a copy of Joel’s album The Stranger (“I’d rather laugh with the sinners than cry with the saints” is still my favorite song lyric of all time), I was now determined to read everything King had ever written.

Christine, Carrie, Salem’s Lot, The Shining, and many more books over the years have found their way to the darkness beneath my sheets. I know, I don’t even need to hide the books anymore, because I am 43 and now my dad and I trade King books when we are finished reading them. Back in college, when I was broke and paying the tuition myself, I even joined the Stephen King Book of the Month Club and had books mailed to my dorm room.

Despite my particular passion for King, I understand the reality that many “real” writers and readers shudder at the name of New York Times best selling author Stephen King; laughing him off as an example of popular success but mere mediocrity in literature.

These writers and readers can gargle my balls.

You could argue the numbers. His books have sold 350 million copies. But why even bother going with numbers (Fifty Shades of Grey may be selling like handcuffed hotcakes, but that doesn’t mean it’s good) when you can just discuss the quality of the work. King stories are gripping, passionate, engaging page-turners. Period.

As a lifelong fan, I’ve noticed that people who hate Stephen King either haven’t read any of his books or are the kind of douchebags whose opinions I really don’t give a bucket of pig’s blood about because they have no sense of humor. If you are a King hater, let me suggest this. There is one book of his that you simply must read before you can declare a legitimate dislike of his work. It’s not a novel or a book of novellas or short stories—it’s actually his 2000 nonfiction book On Writing: A Memoir of the Craft.

In 2004, Roger Ebert said in his review of the movie Secret Window (based on a King story),

"A lot of people were outraged that [King] was honored at the National Book Awards, as if a popular writer could not be taken seriously. But after finding that his book On Writing had more useful and observant things to say about the craft than any book since Strunk and White's The Elements of Style, I have gotten over my own snobbery."

On Writing is my favorite book of King’s—not only because it’s autobiographical in nature and explains a lot about the man behind the author’s mask (he doesn’t remember writing Cujo because he was so high on cocaine!) but also for its pure inspiration. I reread it every few years and enjoy it just as much again.

As for the perpetual, ultimately unanswerable question of what makes a good writer? King notes, "If you wrote something for which someone sent you a check, if you cashed the check and it didn't bounce, and if you then paid the light bill with the money, I consider you talented."

Beyond his own standards and thanks to the opinions of millions of others, King will inevitably go down in history as one of our most talented American writers. It’s not about the popularity. It’s about the writing.