The Young Neurotic and His Science Fiction Magazine 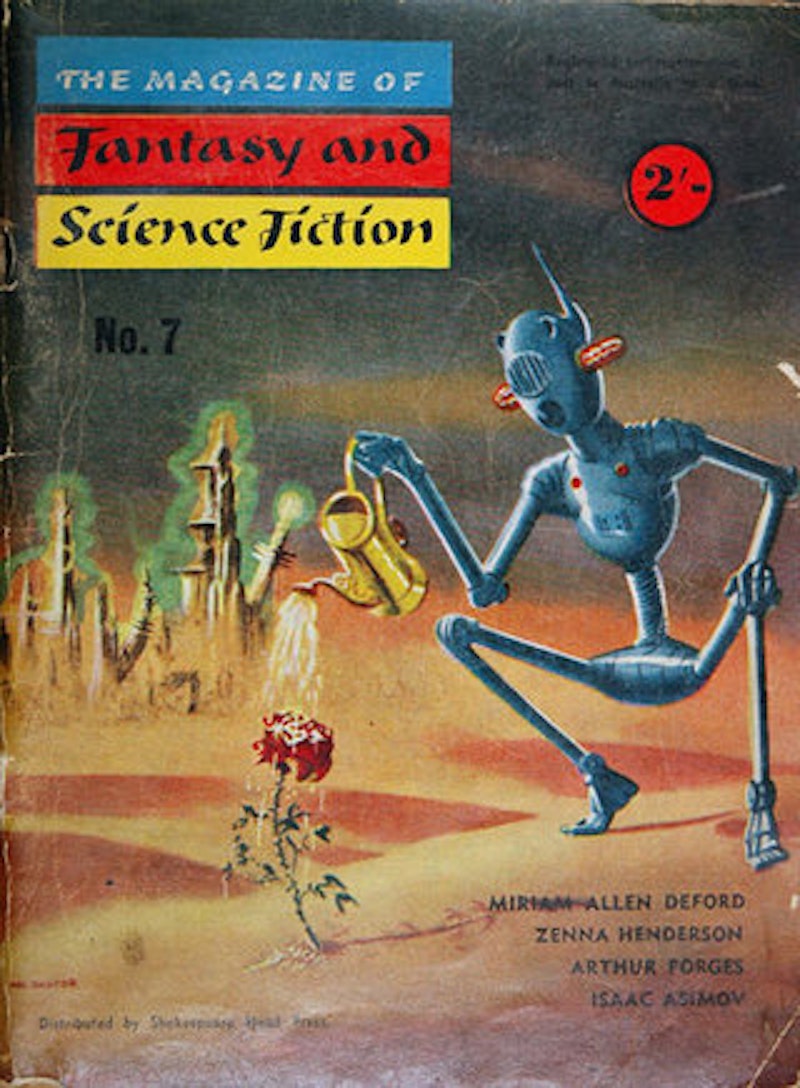 This is a story about myself on the brink of adulthood. But it's trivial and I give it only to provide a sense of scale about my life. My coming-of-age story turns out to be just this size: a grain. It's a gesture toward an event, not an event itself. You barely know it's there. But live my life and you will look at moments this small. That's the stuff I've got.

I was 12 or 13, up in my room, and didn't have much to do with anyone. I had no special reason for being in bed, no illness or anything, but that's where I spent my time. If I'd been to the newsstand and had new comics or paperbacks or science fiction magazines, I read them until they were done, just worked through the pile. It was like another day at the office. I mean, I did this so many times.

Reading the magazines, books and comics was the only thing I could tag as a pleasure; therefore, it had to be a pleasure. Yes, I found many of the comics and so on to be boring. But, to me, my firsthand and actual experience seemed beside the point. It was not as officially promised (this stuff was good), so it had no weight. It was the result of my personal malfunction. Basically, I figured I was too dumb and too young. My plan: Keep moving ahead, read the stuff until my reaction came out right. Then I'd be making progress.

At age 12 or 13, for me progress meant reading The Magazine of Fantasy and Science Fiction, which was for adults (“literate, sparkling science fiction,” etc.). It had great days behind it, the 1950s and 60s, and Isaac Asimov praised it and wrote for it. And I was going to enjoy it no matter what. On this day I finally managed. I read the entire issue. It was a delicate, case-by-case business at first. One story turned out to be interesting enough to be worthwhile. Then the next one did. Then the pieces fell into place and I had read the whole thing without goading myself forward. That meant I was becoming adult: I liked what I was supposed to like. And I covered quite a chunk of words: adult reading capacity.

I felt sure I was making progress. For once my failed hopes had paid off. I could read the stories after all, and I felt like an adult. I expect there are a lot of geeks who fetishize such a moment. We attach a destiny to being able to read Gone with the Wind at age 13. (Not that I read the book. But if I'd known a girl who had, I would have been highly agitated and in doubt of my self-worth.) I felt like I was getting on top of things, having my life move forward, because I read through Fantasy and Science Fiction.

There it is, my nub of a coming of age. This early moment led to some nice sequels. Over the next couple of years I read books that I liked, and I felt proud of myself because they were classics. Fine, but then it all died. Something was wrong with the original impulse, because it cut of in my mid-teens and since then my reading has slumped toward dumb stuff: blogs and political opinion and show biz biography. What was the problem? Well, I figure the exercise was so self-contained that performing it led nowhere. My measure of progress in life—life, the whole show—was to read what adults read. What a mistake. But I was good at nothing but reading, so that's the goal I chose and I told myself it would get me where I had to go.

The most remarkable thing about my bed years and the comics and magazines: I could barely tell that I was bored. Not only did I not get out of bed and find some human faces besides my family, I never thought of doing so. I worked a dent into the mattress and felt my spine dip into it and start to ache, and I never quite put together that this was a problem. On I slogged. Actual results didn't matter; in fact I don't think I could have processed them.

The end of summer vacation. I think that was it. I got through that whole F&SF just before school started. I was looking forward to school because there was always that bubble of hope: faces around you again, and this year would be different, this year all of a sudden I'd be able to talk. Such was the hope. So I read the August F&SF and felt like I was getting someplace.

This issue's cover: yellow-orange lumped in what might have been a man with a cowled face and a cloak. It was one of their semi-abstract story illustrations. (Nowadays nobody was supposed to understand anything. That seemed to be the rule.) Slick, cruddy paper for the cover because this was the 70s and the magazine's nice paper covers were a thing of the past. The main novella was about a psychic race on another planet, I think. And there was a humorous story about a bachelor. A week or so after reading the magazine, I repeated what I thought was a knowing reference, something I had found in the story, and embarrassed myself while eating dinner at a restaurant with my family. No big deal, in one sense, but for me a depth-bomb of embarrassment. (The bachelor had a thought involving Swedish exercises, and I picked up on the words and lobbed them into conversation around the table... and oh well. Swedish was sexy back then, and that's what the bachelor's joke was built around, but I didn't know.)

Anyway, I read every story on the table of contents. Shut them down one after the other, and that was my coming of age. I mean, insofar as I had one. I don't have any other moments to put up against it; spend your life in your room and big moments become pretty scarce.

Ticked off the stories as I read them. I made sure to do that, and because of it I felt like I was getting someplace. Typical.