From the desk of Bootyliciousness. 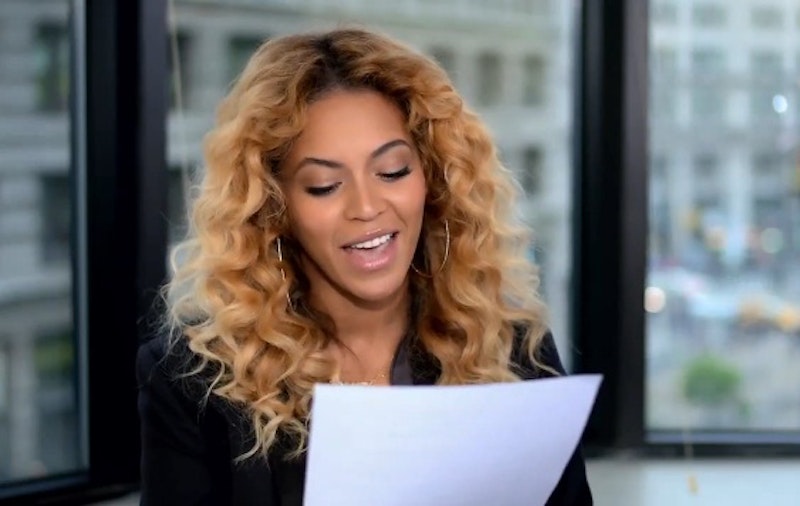 In the wake of her celebrated public letters to First Lady Michelle Obama, late pop icon Michael Jackson, and R&B upstart Frank Ocean, Beyoncé Knowles has agreed to publish a book of one-way correspondence through Random House in a deal worth a purported $3.5 million. Beyoncé Knowles: Selected Letters, Volume I will be available in hardback by Christmas 2013. “What I tried to capture in these letters is the sincerity that is the core of who I am, that unflinching candor, that reflection of my truest self at the moment of authorship,” Knowles explained in a press release. “Selected Letters is me at my realest, really real, on the real, for real.” —The New York Times

Trayvon Martin
We’ll never know who you might have grown up to become, but we’ll never lose sight of the promise you represent for so many. You’ll live on in all of our hearts, eternally.

Whitney Houston
Your legwarmers were the beginning; I noticed them first, and begged my Dad for a pair, because the other girls I knew wanted to be like you, and I did too. But then your voice knocked me out. It was a weapon, the kind of megaton payload voice that turns reality on its head and sets the bar a few feet higher. I must have watched The Bodyguard like a million times. Years after Destiny’s Child wound down, we confided in one another that in performance and in the studio, you were our template for strong, strident womanhood, for intense and muscular expression – minus abusive relationships and crack cocaine and career suicide and reality-show purgatory and junk like that.

Garanimals
Where can I buy a silver-sequined Garanimals jumper?

Thomas Kinkade
Your aggressively calming pastoralism illuminates many a green room from NYC to Houston to Los Angeles, so that sometimes it seems like all green rooms are therefore connected and contiguous, and the whole notion of “place” is totally static, malleable, up for grabs.

Rosa Parks
When I think back to learning about the American civil rights struggle as a little girl, my most vivid memory is of you, in fuzzy, faded photographs. You wore your rage like an aura, or a velour cape, but what stuck with me is your unflagging composure in the face of adversity and injustice. My tutors spoke of you in reverent tones; they were in awe of you. You weren’t subjugated by that bus; no, you conquered it by refusing to be moved, and in so doing changed a world many never expected to change. Sometimes when I’m traveling cross-country in one of a deliberately interchangeable fleet of bulletproof, double-decker tour buses, I’ll be sitting at the back of one of those buses, chilling, and then I’ll think of you in your heavy coat and angular prescription frames, of your fierce, quiet dignity, and so then I’ll find myself drifting up to the front, past security and my beautician and the nanny and slumbering members of my entourage and I’ll go to the fridge and treat myself to an Orange Fanta.

Annie Leibovitz
A lot of people are worried about you. Give me a call.

Jonathan Cainer
Look: I had a dream about you. We were wandering on a darkening plain, hand in hand. Keep watching the stars, you said, and so I did, and the sky was in flames. The hand of yours that wasn’t holding mine pointed, and I became aware at that moment of the immensity of the cosmos and indeed all creation, and when I looked back you had the head and mane of a fully-grown lion, and I began to know fear, but you were like “be still, child, I am Aslan.” Then we stared at each other for a long time and then I woke up and wandered into the nursery and stared at Blue Ivy until she awoke and met my tearful gaze, at which point she began to cry.