He was ready to make more money by, well, making more money. 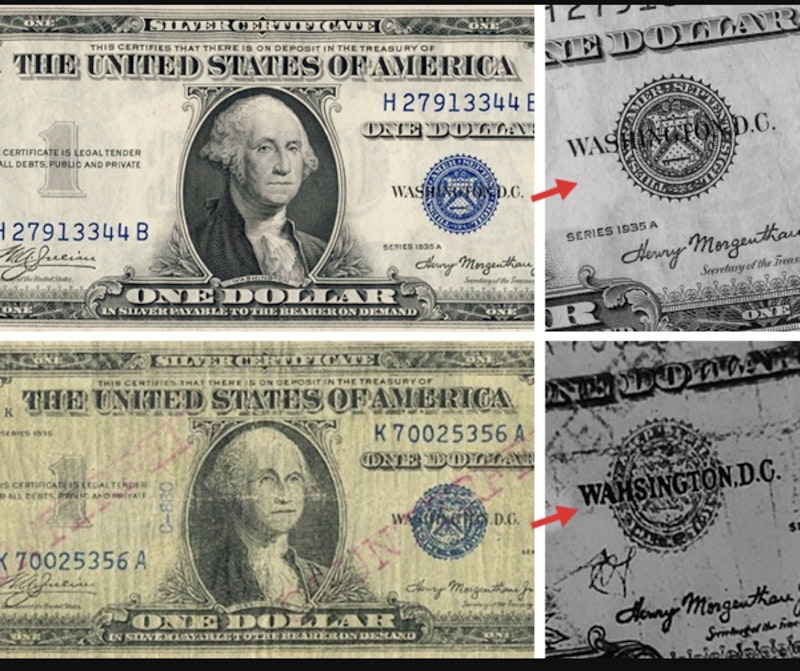 Emerich Juettner, also known as Edward Mueller, who lived near Broadway and W. 96th St. in Manhattan, eluded the counterfeiting laws from 1938 to 1948, longer than any other “maker of the queer” in American history.

The first 63 years of Juettner’s life were upright and respectable. Short, blue-eyed, white-haired, mustachioed, and blessed with a winning if toothless grin, Juettner had learned the rudiments of photo engraving in his native Austria. After emigrating to America at 13, he worked as a building superintendent while tinkering with numerous unsuccessful inventions. With his children grown, the widowed Juettner retired in 1937 to Manhattan’s Upper West Side, where he lived with his mongrel terrier. He worked as a junkman, picking up discarded appliances and old tires from vacant lots with a pushcart. But he wasn’t making enough to live on and soon found himself nearing destitution. So, using his engraving skills, he photographed a dollar bill and recorded the images on sensitized zinc plates, which he then etched in an acid bath. With a little retouching and a small hand press, he was ready to make more money by, well, making more money.

The U.S. Secret Service, which has chased counterfeiters since 1865 (protecting Presidents became part of their mission only in 1901), first noticed Juettner’s activity when a phony $1 silver certificate turned up at a cigar store on Broadway near 102nd St. Even as the agency opened a new case file, numbered 880, agents felt everything about the bill was unusual. No one in recent times had considered singles worth the trouble to counterfeit. More importantly, the bill was obviously, laughably bad. U.S. currency was printed on 75 percent cotton and 25 percent linen stock, with red and blue fibers of various lengths embedded in the paper. Juettner had used cheap bond paper from some corner store. The numbers were fuzzy, many of the letters were misshaped or illegible, and Washington’s portrait was, as the Secret Service itself reported, “poorly executed…Washington’s right shoulder blends with the oval background…the left eye is represented by a black spot…the right eye is almond-shaped.”

The bogus singles kept turning up. Those that could be traced had been passed to the subway and elevated lines, and newspaper vendors, bartenders, and other small businesses that handled hundreds, if not thousands, of $1 bills daily. Subway fare was then five cents. Juettner carefully passed his fakes only at busy times, such as rush hour: a five-cent fare paid with a phony dollar yielded a 95-cent profit. And, as the Secret Service later learned, Juettner never spent a fake in the same store twice and passed only one or two bills a day.

By December 1939, File 880 contained some 600 counterfeits. The bills grew worse with time: while touching up the plates, Juettner misspelled the President’s name as “Wahsington.” Nonetheless, he kept passing bogus singles throughout World War II despite successive Treasury publicity campaigns. Apparently many who found themselves holding a Juettner counterfeit kept it as a souvenir instead of turning it over to the government.

By 1947, the Secret Service held over 5000 of Juettner’s phony singles. Yet, despite what St. Clair McKelway of The New Yorker called “a manhunt that exceeded in intensity and scope any other manhunt in the chronicles of counterfeiting,” despite thousands of interviews and hundreds of thousands of fliers, the agency didn’t have a clue to his identity.

A few weeks before Christmas 1947, Juettner’s apartment had caught fire. New York’s Bravest, in extinguishing the blaze, piled the old man’s junk in an alley where a sudden snowstorm buried it. The homeless old man stayed in Queens with his daughter while his apartment was being repaired. On January 13, 1948, several neighborhood youths noticed some 30 strange-looking $1 bills lying about the alley. Unlike countless businessmen who had accepted Juettner’s singles, the kids instantly realized the bills were bogus. One of their parents took some to the W. 100th St.station house, where detectives identified them as counterfeit. The Secret Service quickly identified the tenant whose singed furnishings had been dumped in the alley and arrested Juettner when he returned to his apartment a few days later.

Juettner had succeeded because he passed no more bogus singles than necessary for his survival, only knocking off a few bills whenever he needed food or help paying his $25 monthly rent. Blandly admitting everything, Juettner was sentenced to a year and a day and fined one dollar. He was released after four months to live with his daughter and her family. After McKelway profiled him in The New Yorker, 20th Century Fox filmed Mr. 880 with Edmund Gwenn, renowned as Kris Kringle in Miracle on 34th Street, in the title role. Juettner made more money from the film than he had as a counterfeiter.