By the Time We Got to Woodstock

I'm the guy in the middle wearing the tie-dye shirt in tribute to Woodstock’s fabled beatnik/hippie past. 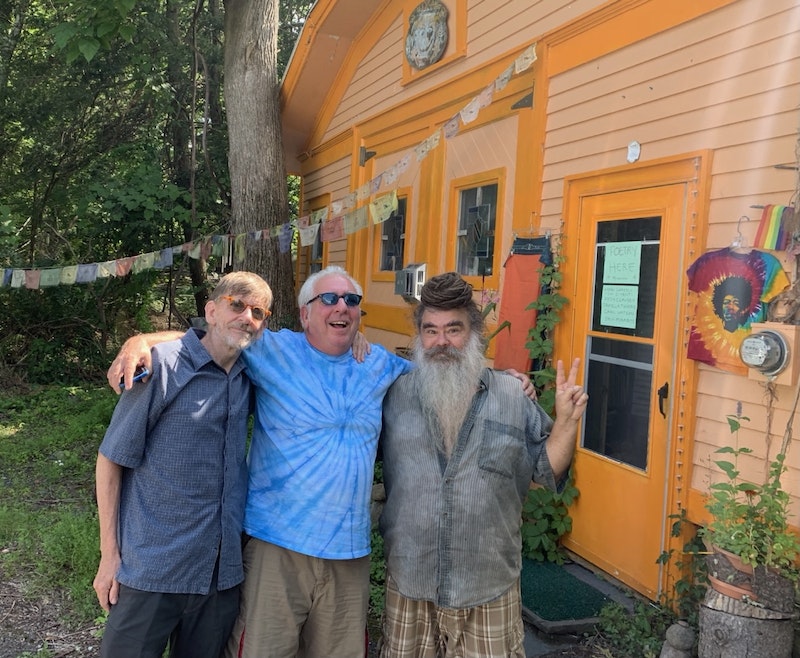 I've jokingly threatened to visit him ever since the mercurial poet and dear friend Carl Watson got an old barn house 16 years ago. It stands majestic as the Catskills Mountains of Fleischmanns, NY. An archeological relic of simpler times. I finally made good on my desire last weekend. It's a tranquil setting, and Carl made us feel right at home. My wife and I love road trips for adventure and discovering new places and people. So in the mixed plans to follow through on our pilgrimage promise, I noted a bookshop /art gallery with regular poetry and music events in Woodstock, NY. It's not far from Carl’s place, and I contacted them about the possibility of scheduling a reading during our stay. I also invited a good friend and mentor, the Romanian poet Andrei Codrescu, who resides in Brooklyn, to join us. He liked the idea, and we were off to the poetry races.

I contacted the proprietor Shiv Mirabito at the Shivastan Ashram Bookstore/Art Gallery. He responded enthusiastically, and we set a date for a reading. I also contacted Ed Sanders, who resides in Woodstock, inviting him to join us at the poetry reading. He never replied, so I let it go. For those unfamiliar with Sanders, he’s a well-established poet, musician, and novelist who penned his first noteworthy poem, "Poem from Jail," on a roll of toilet paper in his jail cell. He was busted for protesting Navy subs armed with nuclear missiles in 1961. In 1962, he founded the journal Fuck You, a magazine of the arts. Around the same time, Sanders opened the Peace Eye Bookstore in NYC's Lower East Side. He went on to international fame with the publication of The Family, a document chronicling the Tate/LaBianca murders and Charles Manson's ragtag bunch of psychotic freaked-out hippies.

Along with poet Tuli Kupferberg, Sanders founded The Fugs. The rest is a long and arduous history. The writing style of his own invention, a process known as Investigative Poetry, includes two volumes, Tales of Beatnik Glory, amid numerous music, poetry, and novels. I'll leave Ed Sanders to his privacy and his hallowed place firmly cemented on the immortal bridge that connects the beat generation to the counter-culture movements of the 1960s and beyond. I also hoped to see legendary poet Charley Plymell again, but time constraints and lack of communication made it all but impossible. I genuinely admire the poets mentioned and look up to them as beacons of naked truth.

Back to Shiv Mirabito and his place in the poetic world. Shiv's a true spirit of light and unconditional love. He began his journey to enlightenment as a teen hitchhiking to weekend campouts in Woodstock. On one such excursion, a friend told Shiv about the great parties to be found in Cherry Valley, NY, on Allen Ginsberg's farm. I was there for the Beat Reunion in 1998. My fondest memories are of hanging out with Charley and Pam Plymell, Ray Bremser, Carl, and Catfish McDaris.

Shiv became a regular fixture around Ginsberg's homestead. While there, he turned on to Buddhism and the mystical arts. He had access to Allen’s extensive library and was drawn to books on Hindu and Buddhist studies. While in college at SUNY, majoring in Anthropology, he befriended an Indian Professor who took the students on an extended field trip in 1988 to places around India. From that pivotal point, the jigsaw pieces came together for Shiv's calling. Discovering the intricate handmade paper in Nepal, he began publishing handmade limited edition poetry books with silkscreen artwork. Then, a decade later, opening the Shivistan Ashram bookshop as an outlet for the fine handmade books and prints he lovingly produces. No visit to Woodstock would be complete without a trip to his shop.

The actual reading commenced in the secret garden behind the shop. It's a beautiful oasis away from the hordes of tourists. Looming thunderstorms threatened, and the proceedings moved into the bookstore. I went first, reading a short piece from The Baltimore Kid. Published initially in Splice Today, it's a recounting of my punk rock days with Da Moronics, Baltimore's first punk band. Carl Watson followed with his imitable style lamenting the perils of online dating with computer-generated AI pornbots. The rain subsided momentarily, and Andrei Codrescu took the reading outside to the secret garden regaling tales of art parties with Peggy Guggenheim and the true nature of anarchy.

Andrei's close comrade and fellow Romanian Valery Oisteanu, who sat nearby, proclaimed, "Revolution again!" Valery will launch his new book: In the Blink of a Third Eye, at Shivs bookstore on Saturday, August 7th. He's as colorful a character as any seasoned poet should be. Next on the bill Andy Clausen, a recent recipient of the Beat Laureates Award, is the real deal. His new book, BEAT: The Latter Days of the Beat Generation, A Firsthand Account, has received critical acclaim. He read a brief synopsis of psychedelic pandemonium in modern times. Andy's significant other, local poet Pamela Twining, who hails from Maryland’s Eastern Shore, read next. I could tell by her poems how much they care about one another.

Shiv Mirabito rounded out the day's lineup, thanking all in attendance. He read a few pieces from his latest book Uncle Scallywag, a handsomely-crafted book of collected poems printed in Kathmandu. I'll conclude this travelogue with a quote from Carl Watson: "In an upstate mall called Woodstock, hidden from the crowds of shoppers and gawkers, behind the American Legion Hall, there is a candy store of books and spirit things. Where a few rain-dampened poets of a certain age told tales of everyday miracles and madness before going their separate ways on the storm-battered darkness of the roads. Umbrellas were needed. Good fellowship was had by all."

Shiv: "I am bohemian to the bone, as an alternative as poetry gets, a queer poet, photographer, publisher, artist, anthropologist, & archivist with no car, no tv, no job, & no phone. All poets are my family & I love everyone—also, everything I say is a lie."

The trio pictured above was taken by my wife, Bronwyn, upon our arrival. Carl's on the left, Shiv on the right. I'm the guy in the middle wearing the tie-dye shirt in tribute to Woodstock’s fabled beatnik/hippie past.