From Penn Station, to the High Line, to Chelsea, through the Bowery, and across the Manhattan Bridge. 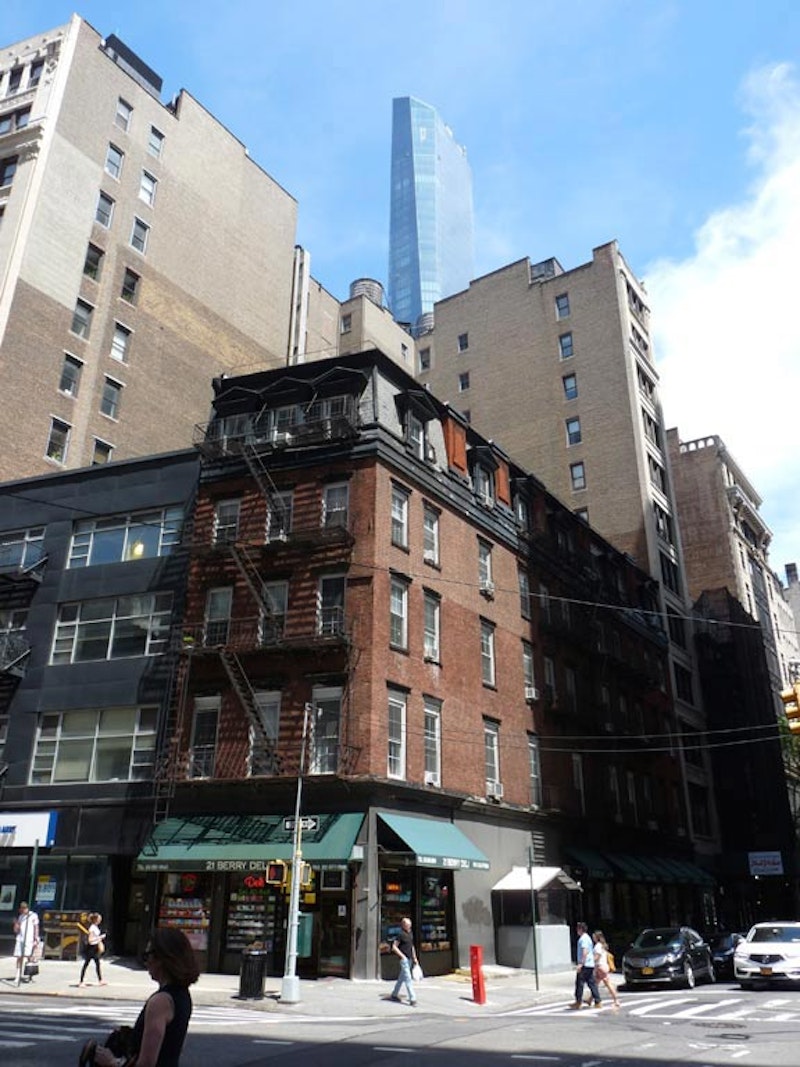 I recently took a walk from Penn Station, exploring the newest and final section of the High Line that will open to the public, into Chelsea, south along 4th Ave., 3rd Ave. and the Bowery, and then across the Manhattan Bridge. Here’s a sampler of what I found en route.

The brick building on the northeast corner of Broadway and W. 21st St. has the air of something important about it, as if it has a past, and indeed it was once a hotel called the Bancroft House. It was constructed in 1858 and likely acquired its French Second Empire trappings like a slanted roof and dormer windows when the style was popular in the 1870s and 1880s. By the 1920s, there was still a hotel there, but it was the Hotel Courte by then.

When I was working at Tiffany & Co. offices at nearby 200 5th Ave. in 2013 and 2014 the 21 Berry deli on the ground floor was a go-to place for yogurt, soda and chips. While my Tiffany’s compatriots were at Eataly, I was probably the only Tiffany’s office worker patronizing Papaya King on 7th Ave. and W. 23rd.

Broadway, formerly a busy two-lane thoroughfare, is now just one southbound lane as bike lanes and pedestrian plazas have accumulated along its length. Broadway’s full traffic mojo is now found only north of Columbus Circle. 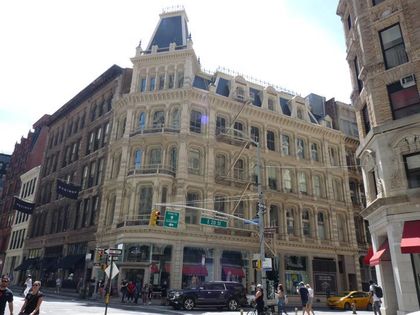 Just as Macy’s moved uptown from its original location, so did Lord & Taylor. The store’s third location was in this French Second Empire building, on the southwest corner of 901 Broadway and W. 20th St. L&T was here from 1873-1914 in one of NYC’s larger cast iron front buildings. British immigrant Samuel Lord and George Washington Taylor established their first dry goods store on Catherine Slip on the Lower East Side in 1826. Lord & Taylor’s 5th Ave. flagship was open from 1914 until its closure in 2019.

900 Broadway was constructed in 1887 as the Goelet Building. The original owners were in the Huguenot French family, who’d been in the Northeast since the early colonial era. It was an early solo design for Stanford White, who’d designed the original Madison Square Garden that was actually on the northeast corner of the square. White, in a partnership with Charles McKim and William Mead, designed the original Penn Station and other architectural masterpieces. He never lived to see Penn Station completed; after, it’s said, he sexually abused showgirl Evelyn Nesbit, he was shot dead by her husband, Harry Thaw. 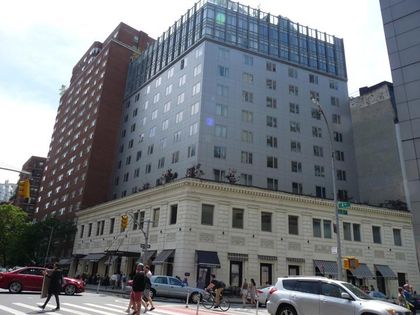 In 2013, the Hyatt Union Square Hotel was completed at 4th Ave. and E. 13th St. It was constructed atop the empty shell of a two-story building; Municipal Archives photos indicate that it had been a used car dealership. The restaurant on the ground floor is called Bowery Road. 4th Ave. is the north extension, between Cooper and Union Squares, of the pre-colonial Native American trail that became the Bowery when it became the road to Peter Stuyvesant’s farm, which in Dutch was called a bouwerij. 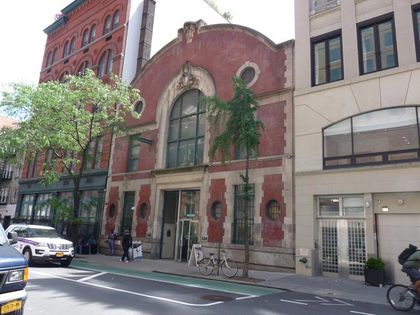 #126-128 E. 13th, with its Beaux Arts design and rounded roofline, looks rather unusual and indeed, it’s a relic, one of NYC’s few remaining buildings constructed to auction horses, as Van Tassel & Kearney Auction Mart in 1903. It has also served as a candy factory, a vocational defense training school for women in World War II, the studio of artist Frank Stella, and as a dance studio. It’s had NYC Landmarks Preservation Commission protection since 2012. 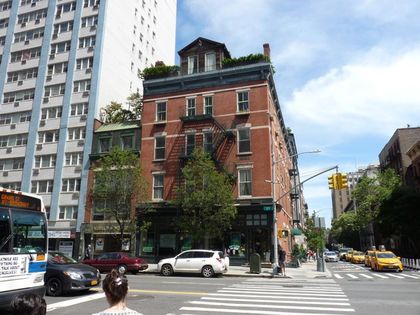 The NE corner of 3rd Ave. and E. 13th is historic in two ways: a pear tree planted by Peter Stuyvesant stood here in what was originally his farm from 1647 to 1867. It perished when two horse-drawn wagons crashed into it. It’s a matter of serendipity that it wasn’t in the path of E. 13th St., which was cut through in the 1820s. The plaque commemorating the long-lived tree was actually in the wrong place, on E. 10th, for 46 years, from 1959-2005.

The apothecary on the corner, Kiehl’s, has been there since 1851, so the tree and the drugstore shared the space for 16 years. The store still features its original crystal-drop chandeliers, and the staff wears white coats as it dispenses cosmetics, facial cleansers, scrubs, toners, and moisturizers. Its Original Musk Oil became the most widely imitated fragrance in the world after its 1963 introduction. 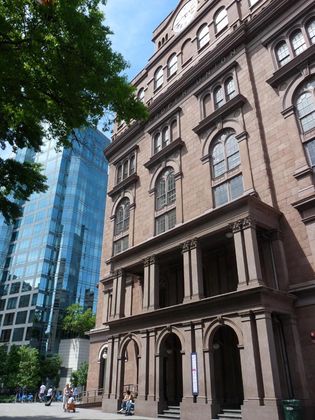 The sun didn’t give me a great angle to shoot the famed Cooper Union in Cooper Square, so I just shot the south-facing portico today. Cooper Union still anchors Cooper Square as it has since 1859. The school was founded by inventor Peter Cooper, who laid the first transatlantic cable, ran the first successful railroad, and was the first producer of edible gelatin (the father of Jell-O). The school’s great hall was where Abraham Lincoln launched his presidential campaign in 1860; other speakers included Mark Twain, Frederick Douglass, Susan B. Anthony and presidents Grant, Cleveland, Taft, Theodore Roosevelt, Wilson, Clinton and Obama. 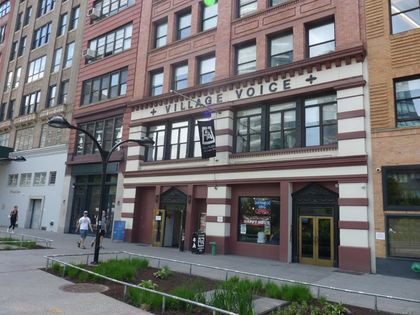 For decades New Yorkers visited newsstands on Wednesdays to get the latest Village Voice, founded in 1955, to read the best in journalism with a mostly left-wing bent, which didn’t prevent it from being NYC’s premier weekly newspaper (with competition from Soho News and New York Press). The Voice cost a dollar until it was distributed for free for its last years, and the print version published until late-2017. The online version survives with mainly archived content. The Voice was not loved just for its articles: it had very large entertainment and job listings that millions relied on.

The Voice‘s editorial offices bounced around the Village, with the final office located in Cooper Square. 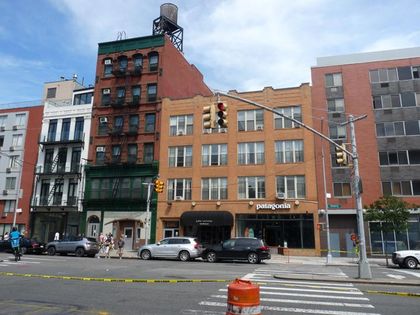 The center building opposite Bleecker on the Bowery, containing the John Varvatos and Patagonia stores, is the former Palace Theater and for the better part of four decades, CBGB, the club opened by Hilly Kristal in the early-1970s that at first featured country music. Kristal, however, proved prescient when he began booking bands that were starting to percolate in the East Village scene in the mid-1970s, including Blondie, the Ramones, and Television. Patti Smith, also a part of that burgeoning scene, played CBGB’s final show in October 2006.