Learning Again this Spring to Love the World

The flowering of the world reminds me that I'm still alive; sometimes I'm semi-secretly ecstatic about it. 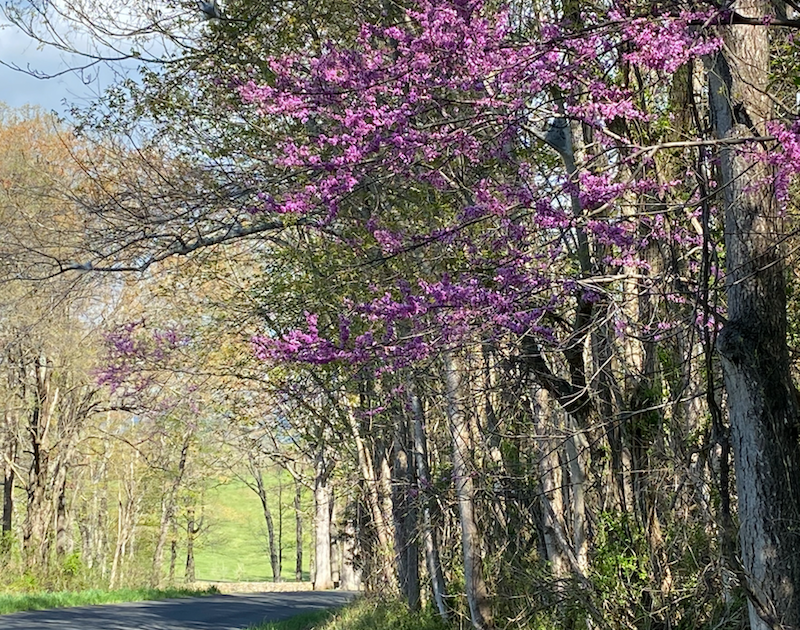 This spring is blossoming with particular lushness, at least here in the mid-Atlantic. As Jane Irish and I drove from Gettysburg PA to Sperryville, VA, we were shepherded all the way by the small redbud trees that line the roads in this region. Perhaps it's my imagination, or the muting effect of memory, or a peculiar quality of Saturday's light, but I don't remember them ever being quite this fuchsia. All the way down, and here at my Mom's place, the intense passages of color were/are everywhere: white apple and dogwood blossoms, the orange of certain maples in early leaf, bundles of daffodils, the late days of extreme forsythia yellow.

On the Catotcins and the Blue Ridge, the pale green of returning life has climbed halfway up the hills. The trees at the top are still in winter, but spring is ascending the ridge from both sides and will overtop it next week. The raptors are particularly active this year, and along with the redbud trees, red-shouldered hawks formed a line along Route 15: one was perched every few miles, standing sentry. The last couple of months I've been surprised to see bald eagles perched near or circling over around ponds in South Central, PA. I'm more of a kestrel, and the little falcons were working the 15 corridor on Saturday as well.

I'm sure you've got reasons to be down, and I'm not saying that your feeling of impending doom is irrational. You're worried about environmental disaster, or purport not to have recovered from the ransacking of the Capitol, or vaccine hesitancy is driving you into a rage. I have a hard time holding on to despair, however, even when I manage to convince myself that it's the right response. This may be because, every single day, and not only in the spring, I’m coaxed into adoration by the world. I love this little roundish planet; it’s incredibly beautiful all the time, in every season. But I feel it—I hope you do too—with special intensity in the spring. The flowering of the world reminds me that I'm still alive; sometimes I'm semi-secretly ecstatic about it.

Likely, I'll do some gardening or plant some trees this year, clip some flowers and bring them inside, eat cherries, peaches, and apples that come from the orchards here in the South Mountain Fruit Belt. The trees and we and the weather are all in it together. We're all participating; we're all part of this single system; it's our spring too, humans. I haven't seen many deer lately; they're hunkered down for reproduction. They'll be back with fawns any minute. See, like us, they're animals; we're all in our reproductive cycle somewhere; the plants too. We're all the same sort of thing, living things in a world where life is everywhere and irrepressible. Each life is always endangered: life as a whole is always blossoming.

No doubt the environment is changing due to human activity, but human activity is also the activity of nature. Nothing we've ever done has made us anything but mammals. We respond to the seasons too; the whole hemisphere participates in them as though it were a single organism, with the daffodils and us as parts. I want to, and on a good day or in a good minute I do, experience the world around me not as something to gaze upon and judge, but as something that I am.

Perhaps you live in a city or a suburb, and you're thinking that feeling your non-distinctness from the world is harder to do or at least less pleasant at a rusting industrial site or tough-ass neighborhood than in the quaint rural zones into which I’ve exiled myself. Or maybe you're thinking that to experience it like this, you'd have to take a break from social media, which is more or less impossible. But I'm saying this is true all the time: right here and now, this is a mammal typing this on a laptop, and a laptop is a natural object, something animals make. And I imagine that there are some beautiful images of flowering trees on Instagram. I'm telling you that I had intense experiences of nature on the road trip down here, at 60 mph in a metal box. Route 15 is part of the ecosystem, okay? And the metal box is too. The birds perch on trees, but also on poles and wires. The redbuds, as I say, love a road cut. The gas stations are not distinct from the meadows; they’re similar developments: things flowering from within themselves and in relation to the whole surround.

I don't think we should be thinking of ourselves as outside nature, that can nurture or destroy it, or even as wildly distinctive in the order of nature because of our consciousness or some little neurological glitch. I hate to say it—I mean I really hate to say it because I might be quoting Sting—but we are the world. Probably Sting or whomever meant that we are one another; the next line is "we are the people." But we're not only the people: we're the dirt and the birds and the flowers. Now, even if I'd like to blossom like a Redbud, I'd rather not be identical to Sting. But there's no keeping me or anyone else from becoming non-distinct from our environments. We're sucking that blossom-scented air into our bodies and then exhaling ourselves back into the atmospheres. We're eating our immediate surroundings and eliminating ourselves back into them. I'd concentrate on feeling that connection more and more vividly and more and more specifically: learn and learn to love the place where you are, is my advice to you.

This world is still beautiful, as beautiful as ever, and we are as much as ever connected to it: merely parts of it, completely embedded in it. I know it seems unlikely, but maybe that means that we're beautiful too.