Synchronicity and the Emergent Pattern of a Deeper Reality

Looking at one of the many examples of synchronicity in our world. What, if anything, does it mean? 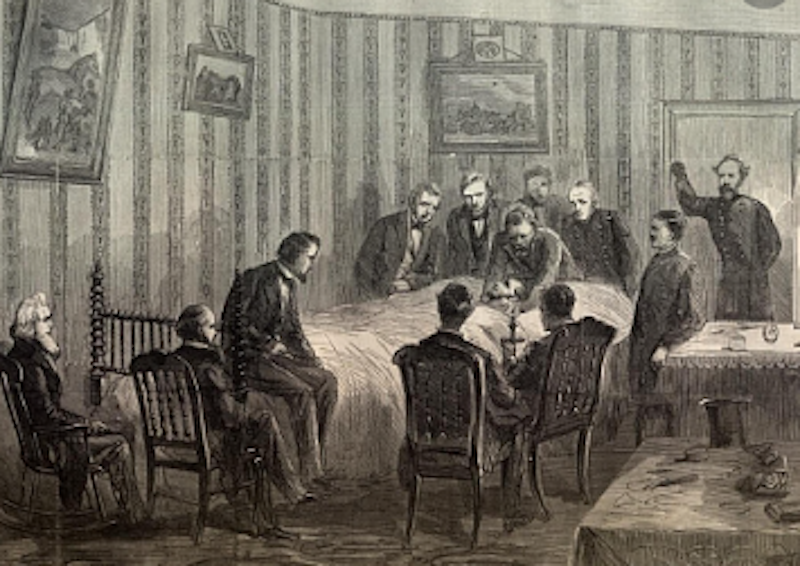 Walt Whitman, the artist widely regarded as the fount from which the tradition of a new, uniquely American poetry sprang, is perhaps best remembered by many for his two shattering memorials to: President Abraham Lincoln: “O Captain! My Captain!”, an unusual work for Whitman in that it has a traditional rhyming pattern, and the longer, 206-line first-person meditation on the fallen head of state, “When Lilacs Last in the Dooryard Bloom’d.” (He also wrote the lesser-known, and slightly lesser, qualitatively, “Hush’d Be the Camps To-day,” just a couple of days after Lincoln’s killing.)

Whitman idolized Lincoln, and his tributes to our 16th President—in particular “O Captain! My Captain!”—played a significant role in establishing Abe’s mythology and Whitman’s status as a poet of great renown. Curious, even eerie, then, that years earlier when Whitman was a young newspaper writer who liked to pass the time by going to watch stageplays, he took great inspiration artistically from a man he regarded as “the greatest histrion [sic] of modern times,” a prominent Shakespearean actor named Junius Brutus Booth: the father of Lincoln’s assassin, John Wilkes Booth.

Well, so what? These things happen. Life is full of coincidences and ironic twists. That doesn’t necessarily mean fate’s guiding hand or some sort of O. Henry-esque scribe is at the helm of this great ship. In a universe of infinite possibilities, it would seem more likely than not that these sorts of things should happen from time to time, doesn’t it?

Fernando Pessoa (born Fernando António Nogueira Pessoa, June 13th, 1888) is, like Whitman before him, considered a towering figure in the world of letters. Where Whitman, in the 19th century, laid the groundwork for a new world of possibility for American poets, Pessoa would be known as the key Portuguese poet, if not writer, of the 20th. Pessoa was an intensely private man who rarely left Lisbon and whose boundless creativity as a writer couldn’t be confined to one persona; instead, he preferred to write under a multitude of what he called “heteronyms” (mere pen names weren’t sufficient to describe the depth of the writer’s alternate identities, for which he created whole lives and worked in completely distinct styles and poetic metres, covering vastly different thematic ground as Ricardo Reis than he did as Alberto Caeiro or Alvaro de Campos), and penned poetry, essays, literary criticism and works of philosophy in multiple languages. To be somewhat reductive, the heteronyms functioned as different facets—multiple facets, each of them—of the inconceivably large whole that was Pessoa (it’s no coincidence that the largest English language volume of Pessoa et al’s poetry is called A Little Larger Than the Entire Universe), with some of the personae espousing controversial and extreme, not to mention contradictory, viewpoints. The great critic Harold Bloom named Pessoa as, along with Pablo Neruda, the most representative poet of the 20th century, and included him in his “Western Canon” of the 26 most significant writers of Western Civilization.

Fans of the sport of mixed martial arts will themselves undoubtedly be familiar with the name António Nogueira, and not due to any particularly great degree of crossover among MMA enthusiasts and readers of the works of modern poetry or supporters of the idea of the Western Canon, but because António Nogueira is the name of a great Brazilian fighter. Or, rather, two great Brazilian fighters who are twins: “Big Nog” António Rodrigo “Minotauro” Nogueira and “Little Nog” António Rogério “Minotouro” Nogueira. Both Nogueiras are now retired, but were from the late-1990s until the mid-2010s regarded as among the top competitors in their respective weight classes (heavyweight for “Big Nog” and light-heavyweight for “Little Nog”), known for crisp, technically sound boxing technique, slick Brazilian Jiu-Jitsu grappling skills and, particularly in “Big Nog’s” case, incredible heart and chin. While “Little Nog” was a perennial top-tier fighter who arguably had the better boxing (winning and placing in a variety of high-level competitions and at one point rumored to be joining the Brazilian Olympic team), it was “Minotauro’s” legendary durability that enabled him to become one of the handful of truly great fighters in his division, enjoying several years as the consensus #1 fighter in the world and many more as a top 3-5 level man, amassing a number of tournament victories and championships during his time in the sport and snatching victory from the jaws of defeat on any number of occasions; perhaps most famously, António Rodrigo bounced back from an absolute thrashing at the hands of 340-pound behemoth kickboxer Bob Sapp (then a highly feared competitor, who had more than 100 pounds on Nogueira) in a “special attraction” contest in which he was dropped flat on his head and nearly put clean through the mat to submit the massive American with an armbar less than a minute before the fight was due to end. It was incredible, “hail mary” triumphs like this that helped secure Nogueira’s reputation as a fighter who could never be counted out and who never lost his cool, always capable of locking up a submission if his opponent gave him even the thinnest sliver of an opening.

Perhaps it was a childhood accident that António Rodrigo Nogueira was involved in that paved the way for his legendary grit and resilience. In the summer of 1986 in Salvador, Bahia, Brazil, at a neighborhood party with his twin brother and a dozen or so other children, the then-10-year-old “Minotauro” and his friends had just finished an impromptu game of soccer in the street when Nogueira, talking to a friend, was knocked off his feet by a truck that had backed up unexpectedly, the driver not seeing the child behind him. “I remember everything. It was the hardest time I had in my whole life,” Nogueira would recall more than 20 years later. “I was talking with someone and when I saw the truck, it was on my side, so I couldn’t escape. The tires went over my body, and I remember my brother tried to pull me to escape from there, but I couldn’t get out. I remember a lot of pain in my legs, then the tires went over my belly and then my shoulder. I felt like I was going to die.”

He was in a coma for four days, and a broken rib perforated his liver, necessitating the removal of part of the organ. It was more than two months before he would walk again, and for much of that time he had to breathe via machine due to damage to his diaphragm. That he lived to have a normal life at all is incredible; that he went on to become an all-time great mixed martial artist flirts with the miraculous. The truck driver, an Bulgarian-American named Victor Stoyanov working for a Brazilian fruit company, was ultimately determined to be blameless in what was deemed simply a “freak accident,” but is said to have struggled with substance abuse and anxiety issues for much of the rest of his life, and was quoted in a contemporary article as believing that his late father’s involvement with a “Satan cult” had led to his being “cursed.”

Edward Stoyanov, a Bulgarian who never made it to the United States but did spend some time in the United Kingdom, was, it seems, involved with the noted/infamous ceremonial magician, poet, mountaineer, philosopher and writer Aleister Crowley. Crowley was less the leader of a “Satan cult,” though, than an occultist, known in part for founding the religion “Thelema.” Crowley’s life was rich and colorful in ways that are no longer possible, but he and his philosophy are perhaps best remembered for his oft-quoted edict: “Do what thou wilt shall be the whole of the law.” He urged his followers to identify and follow their “True Will,” and he and they engaged in copious drug use (especially cocaine and opium), promiscuous intercourse that often served as part of intricate, days-long “sex magick rituals,” and the like. Crowley was notorious for these and other extreme behaviors, and was dubbed “The Wickedest Man in the World”—an appellation he embraced with great elan.

So we have the great Portuguese writer Fernando Pessoa sharing names with twin-brother mixed martial artists from Brazil, one of whom was run over by a truck by a Bulgarian-American man whose father was a follower of the infamous occultist Aleister Crowley. What’s so unusual about any of that? Nothing, really, until one considers that Aleister Crowley was close friends with and a frequent correspondent of Fernando Pessoa, with Pessoa assisting the mischievous Crowley in an attempt to fake his own death during one of the latter’s visits to Lisbon. That Edward Stoyanov’s grandson, Victor Stoyanov’s son, is the minor character actor Michael Stoyanov, most famous for portraying the older brother character (Anthony “Tony” Russo) on the 1990s NBC sitcom Blossom, only makes things stranger. As pop-cultural relic and Blossom co-star Joseph “Joey” Lawrence said so often, “Whoa!”

Physicists have theorized, in recent times, that our world and its surroundings are “emerging from some other, deeper reality,” and much has been made of the extremely commonplace presence of complex, seemingly non-random patterns in nature: the double-helix pattern of DNA, the intricacies of the snowflake, etc. Certainly a roughly square or perhaps “cube” pattern formed among a number of noteworthy and marginally noteworthy literary, sports, cultural and media figures doesn’t prove that any of this is so, but it does, I think, provide some food for thought. And if, by chance, you should happen upon a bit of thread that seems to be leading somewhere unexpected, perhaps it’s worth picking it up and following it a ways to see where it takes you.