Frank Lloyd Wright left his mark on Manhattan and Staten Island, even if he disliked the city and didn't live to see the Guggenheim completed. 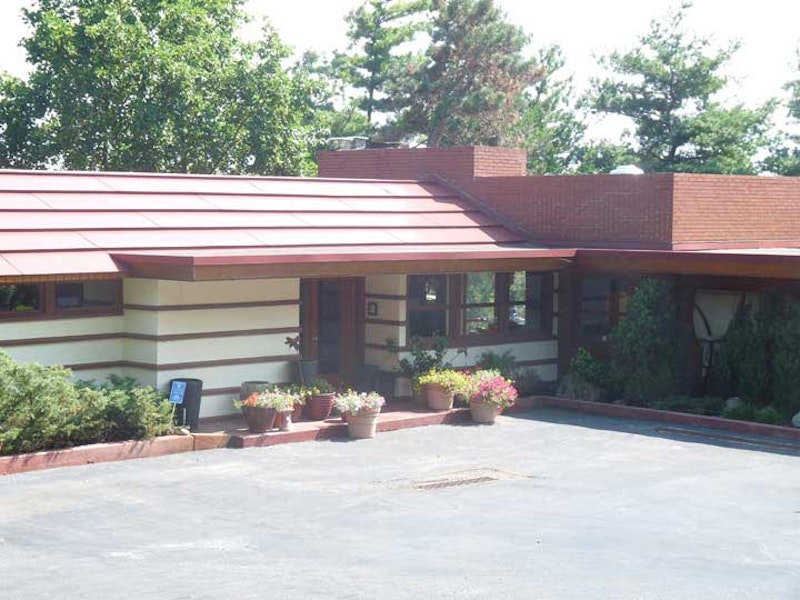 Frank Lloyd Wright, the great Midwestern architect, disliked New York City, and his designs in the metropolitan area were sparse. In fact, both of his buildings within New York City proper were completed after his death. Yet, Wright left his mark in New York City. The Solomon R. Guggenheim Museum is one of the most recognizable buildings in the world. On Simon and Garfunkel’s last album, Bridge Over Troubled Water, there’s a song called “So Long, Frank Lloyd Wright.” Paul Simon wrote it for his partner Art to sing, either as a tribute to his friend or as a kiss-off; it’s still debated today: Art’s original desired profession architecture. Besides the Guggenheim, Wright’s other NYC-area buildings are in hard-to find areas.

In the above photo, this beautiful building, #48 Manor Court in Lighthouse Hill, Staten Island, is Frank Lloyd Wright’s sole private home design in New York City, yet he never saw its completion, as it was finished the year he died, 1959. Wright did plan to visit the construction site in 1958 but illness kept him away.

The lengthy red and tan building is at the edge of Lighthouse Hill, 200 feet above sea level, and takes advantage of the spectacular hillside and ocean views. It’s in the mold of Wright’s “prairie” design ranch houses. The building was commissioned and built for New York personnel agency vice-president William Cass and his wife Catherine, who occupied it for 40 years, selling it in 1999.

The Cass’ were fans of Wright’s work elsewhere in the country, and after seeing him on a Mike Wallace interview show in 1957, wrote the architect to inquire if he’d build them a house. Wright referred them to an associate, Marshall Erdman, a Lithuanian-born architect, who agreed to construct a design called “Prefab No. 1.” Prefabricated units were shipped from Madison, Wisconsin, and assembled here by another Wright associate, Morton Delson, who sited the house for maximum views of the valley and Richmondtown below.

The house is named for a copper beech tree that originally graced the property. A 1967 hurricane felled the tree, but a new one was planted in its place.

Wright, who believed that a building’s interior furnishings should be designed in concert with the exterior, also designed the living room and bedroom furniture. A swimming pool was added in the 1960s as a break against forest fires on Lighthouse Hill. 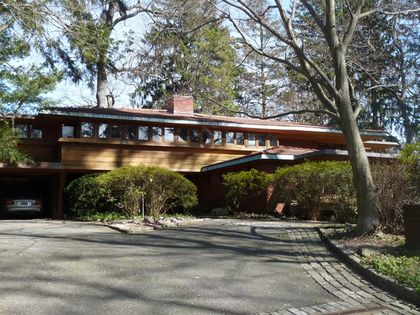 Though Wright’s houses can be found mainly in the Midwest and West, there’s a Wright-designed home in Great Neck Estates, on Magnolia and Myrtle Drives just east of NYC. It’s a small, seven-room house built in 1937-1938 for Mr. and Mrs. Benjamin Rebhuhn, a magazine publisher and dress designer, respectively. It was designed with a hole in the ceiling around an already-existing oak tree, but the tree died from excessive heat shortly after, and the hole was filled in. The story goes that Ben Rebhuhn read an article in Coronet magazine about Wright, wrote the architect and asked him to design a house for him, and Wright assented. 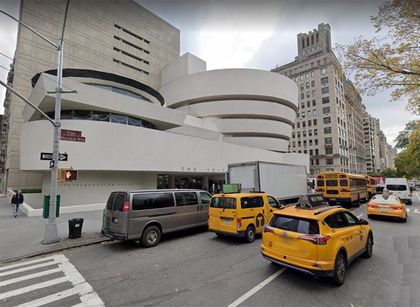 The spiraling Solomon R. Guggenheim Museum, on 5th Ave. between E. 88th and 89th Sts., faces Central Park and can be thought of as a Modernist representation of a beehive. Museumgoers gradually ascend a gently uphill spiraling interior ramp to view the art on display. The Guggenheim Foundation, named for a wealthy art collector, was founded in 1939 as Museum of Non-Objective Painting under the direction of artist Hilla von Rebay and was named for its founder in 1952. The museum’s specialty, non-objective art, is the interpretation of the phrase “art for art’s sake” as, in general, the works in non-objective art are subject-free, consisting of designs and shapes that catch the eye of the viewer and mean whatever the viewer parses them to mean. Rebay herself was a leading light in the genre, as was Piet Mondrian, with his checkerboards of color, Marc Chagall, with his variably interpretable images; artists such as Fernand Léger and Pablo Picasso also produced non-objective work.

In 1943, Rebay and Guggenheim approached Wright to design a flagship museum for the Foundation. Wright accepted the commission, but dallied, and after 15 years, 700 sketches, and many false starts, he had a design he was comfortable with. The Guggenheim opened to the public on October 21, 1959, six months after Wright’s death. Museum director James Johnson Sweeney “brought the building home,” overseeing the last six years of the project. His relationship with Wright was contentious: they disagreed over the interior lighting. Initially critics disliked the building, claiming Wright’s hubris overshadowed the art, and for practical reasons as the curved walls made it difficult to hang framed works. Sweeney, meanwhile, had the longest tenure of any of the Guggenheim’s directors, serving for 27 years.

The museum had an extensive renovation in 1992, during which an adjoining tower was built. Further renovations came in 2008. The museum and its interior were designated as landmarks by the NYC Landmarks Preservation Commission in 1990.

"Somebody said the museum out here on Fifth Avenue looked like a washing machine," Wright said. "Well, I've heard a lot of that type of reaction, and I've always discounted it as worthless, and I think it is."