What a pool of coffee will tell you. 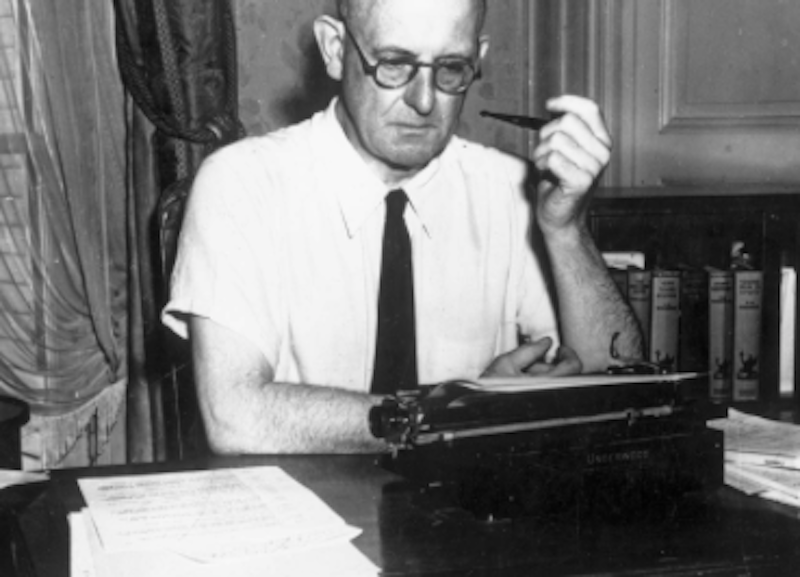 Neil Gaiman once singled out a Wodehouse gem, one of many: “We were wedged in at a table, on the brink of a silent pool of coffee left there by an early luncher.” Gaiman was right. This passage is brilliant, and not in the journalist sense but in the true sense. I don’t mean the word choice is clever or well taken. I mean here we find P. G. Wodehouse expertly throwing levers located at the back of the mind. He’s getting his effect by working our communication units from angles we never saw coming, and he accomplishes this by means of what Bertie Wooster might call two swift, sure strokes. For my money, the resulting effect flies into the reader’s consciousness.

Wodehouse might’ve said only that Bertie and his pal, the dumbass Bingo, were sitting at a table that featured a pool of coffee. But he puts in brink and silent. Now the pool has become a body of water located in a coffee shop. The two pals have ventured upon it, and the (minimally) more thoughtful of the two briefly experiences the mystery of nature. We might ask how a pool of coffee could be an anything of water, let alone a still lake sitting undisturbed in its mountain fastness while passing travel writers unlimber their notebooks. But we don’t ask. Because the story never says any of that. It says brink and silent and moves on.

Thus, the power of suggestion when there’s a highly alert mind to do the suggesting. Wodehouse the man couldn’t figure out why the Nazis stuck him behind a microphone and let him tell pleasant jokes about being their captive. Wodehouse the author employed an entirely different gear of awareness, and it’s one that remains a marvel. Catch a flicker of perception, hook it to a shred of cliché, and grant the reader’s soul a brief shiver of well-mannered lightning. Wodehouse could do that; anyone else who tries is hoping to live up to him.

Usual sources.The quote dates from 1921, about a half decade into the existence of the Jeeves and Bertie series. The story in question, “Jeeves in the Springtime,” was later broken into two stories for inclusion in a quasi-novel. The one with the quote is “Jeeves Exerts the Old Cerebellum,” and the quasi-novel’s called The Inimitable Jeeves. By “usual sources” I mean Wikipedia. I note that Wodehouse, an expert at putting together stories, wanted that pool of coffee to tell us something. The person looking after the table proves to be the very girl that dumb Bingo’s in love with and has been pressing his buddy to meet; here we see her presence heralded. On the downside, “Jeeves Exerts the Old Cerebellum” seems like a hack title, as if Conan Doyle came up with “The Adventure of Sherlock Holmes Investigating.”