How to Raise an Agnostic

And how the Catholic Church can help. 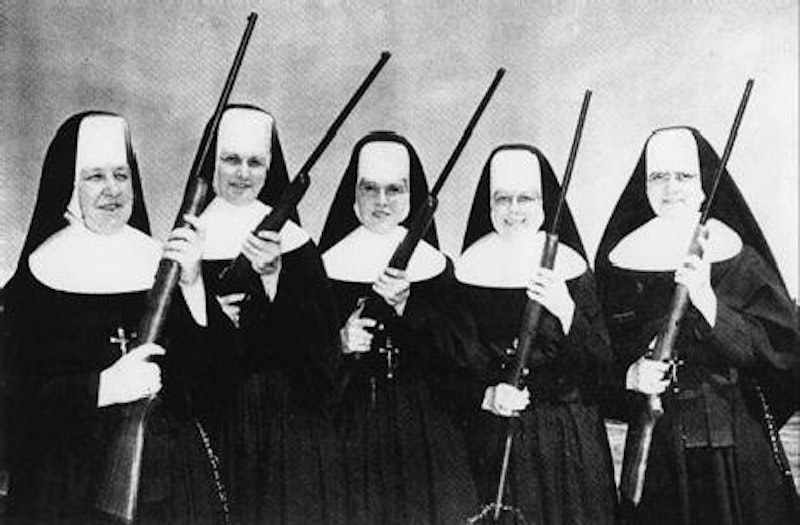 I grew up extremely Catholic. Not just a little bit Catholic. The kind of drunken Irish Catholic family with more than five kids where you are named after both the Blessed Virgin Mary and a saint. The kind where you actually pray the entire rosary on your knees every Sunday night in front of a big stone statue of the BVM herself, like some kind of Stephen King Carrie-style votive candle shit. The kind where you go to Catholic school for a decade and learn to diagram sentences by big, scary, dyke nuns.

I consider myself a recovering Catholic. For awhile, I was a Holly-Lily Catholic, which means you go to church on Christmas (when there is holly) and Easter (when there are lilies), and then you spend the other 363 days of the year feeling guilty about not going to church. Actually, you also spend Christmas and Easter feeling guilty, because priests love to passively aggressively greet “our visitors today” on holidays to make the non-regulars a.) feel like douchebags and b.) give more money during the collection.

The problem with my alienation from the Catholic Church is that I (in the finest Catholic tradition of having too many kids you can’t afford) have four kids. At first, it was game on religious education—my oldest daughter actually went to Catholic school, albeit for only two years until her sister came along and we realized we couldn’t afford it. We went to church, the kids went to Sunday School. Kids number three and four came along. We went to church less, Sunday School less. And now? We don’t go to either. Ever.

It has less to do with my hatred of the politics and hypocrisy of the Catholic Church than my personal beliefs about Sundays. In a family of six, the sheer level of extracurricular activities (many on Saturdays) often means Sundays are “the only day we don’t have something.” Even those have been taken away as more and more sports are now held on Sundays. Am I going to spend Sunday morning getting six people dressed and out the door to Mass and Sunday school? No.

I couldn’t do that anyway, because my oldest daughter is agnostic. After refusing confirmation (imagine how the women in my small town treated me after that one) she was an atheist, but now she just doesn’t care. My next teenager didn’t even get a chance to receive confirmation because we hadn’t gone to mass enough. I honestly believe she is going to rebel and get confirmed as an adult. Good for her.

My nine-year-old received First Holy Communion, but the six-year-old won’t because we just don’t go anymore. Yes, yes, I feel all kinds of guilt about being a shoddy religious educator of my children. I’m losing my religion faster than R.E.M.

It’s not that I don’t believe the stuff in my estranged religion. It’s that the stuff—you know, the faith, and Bible and whatnot—is such an unfortunately small part of the deal. The Sunday School teacher and her extreme game-on, near-cult approach frighten me. I hate that the church hates the gays, because I love the gays. I hate that the church judges everyone like it’s a job. I think they think it is their job. I don’t like being judged.

I think I am a spiritual person, just not a religious person.

As I look back on my childhood, I’m not mad that my parents made us go Extreme Catholic like it was some kind of uniform-wearing, rosary-counting reality show. They did what they thought was right (even the creepy speaking in tongues/charismatic phase—zoinks). So maybe my kids won’t grow up and hate me for denying them a religion. Maybe they’ll grow up and choose a religion of their own.