No One Owns the Coastline 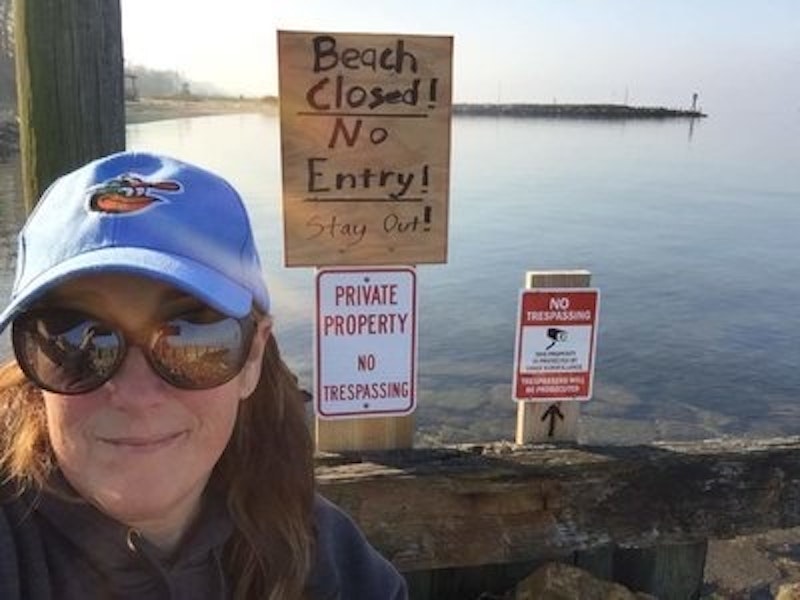 Please excuse the selfie, but that’s me, standing at a public boat landing at the edge of Maryland’s Chesapeake Bay. I won’t name the marina that’s adjacent to the boat landing—no need to publicly embarrass anyone, and besides, I spoke to the marina owner, and we had a pretty good chat. When I took the photo, I was annoyed. It was a beautiful day for December, and it was the first time I’d been able to head out in a month to wander along the beach in search of sea glass. My hobby is directly related to my work; it’s where I unplug and think of story ideas. But here I was, faced with these menacing, unnecessarily threatening signs. The sign about the security camera had already been there (doubtful there’s a camera; I always grin obnoxiously, and flip off the nearby trees regardless), the other signs, including that classy handmade one, were new.

No one owns the actual coastline. This is roughly how it works: Federal coastal or riparian law varies according to the part of the country we’re talking about. Here in the east, and specifically, according to Maryland state law, it’s relatively clear: the waterway is treated like a state highway, so up to the mean high tide line is basically the “side of the road” and essentially no one “owns” it because water covers it twice a day. Private beachfront property owners don’t want to hear this (or, often have never heard it), so if they see someone traipsing across their (God forbid sandy) private property they have a hissy fit. Razor wire fences, bulkhead and giant riprap walls are often erected (often illegally and without permits in the critical area) to keep potentially violent beachcombers away. Of course, rebellious kayakers simply paddle ashore, knowing they aren’t breaking any laws by landing in a low tidal area.

As a kayaker, I’d never land my boat on someone’s 10-foot tiny beach with two Adirondack chairs, a tiny cottage 20 feet from the shore and a bunch of personal belongings lying around. It’s never my intention to trespass on actual private property. But if we’re talking about a vast sandy shoreline, no buildings in sight, hundreds of acres of open land at low tide? I’m going to paddle up and walk the coastline. Nobody owns that coastline, what washes up there is finder’s keepers.

So I chatted with the lady at the marina about the scary signs. She explained that she really didn’t mind people beachcombing at what used to be a huge amusement pier in the early 20th century and is now just a small beach with a bar and a big marina, but that the beach is closed because of nearby marina construction. She’s concerned about people climbing over the rocks and getting hurt. I told her that the rip rap rocks and the signs are inside the mean high tide line, so if someone got hurt on the rocks and the signs weren’t there, that would be at their risk, but with the signs there, the marina looks liable. I’d spoken to someone at the state who had agreed. It’s a dangerous trek to that beach if you can’t park at the marina.

The thing about the clash between property owners and beachcombers is access, and I’ve seen it with other beaches around the Chesapeake Bay as well. The beachcombers just want to walk the shoreline to look for sea glass or shells. They don’t want to look in people’s windows or take their crap or whatever. I mean these are people who pick up broken glass, for crying out loud. But the privacy of property owners needs to be respected as well. Beachcombers should simply ask a property owner if it’s okay to access the beach.  A simple “Is it okay if I park here?” can go a long way to avoiding a confrontation.

One tip for beachcombers is to know the tides. My phone’s tide app tells me when it’s a negative low tide (usually winter, full moon) and I can walk into the Chesapeake Bay from any public boat landing and go sea glass hunting in places where there’s usually water, barely getting my insulated waterproof boots wet. Another solution is simply Paul Revere’s other answer: come by sea. That’s my favorite. Put a kayak in the water at a public boat landing and that vessel makes a quick getaway if you do run into a haughty chest-beater property owner with whom you don’t feel like debating the finer points of riparian law and mean high tide lines.