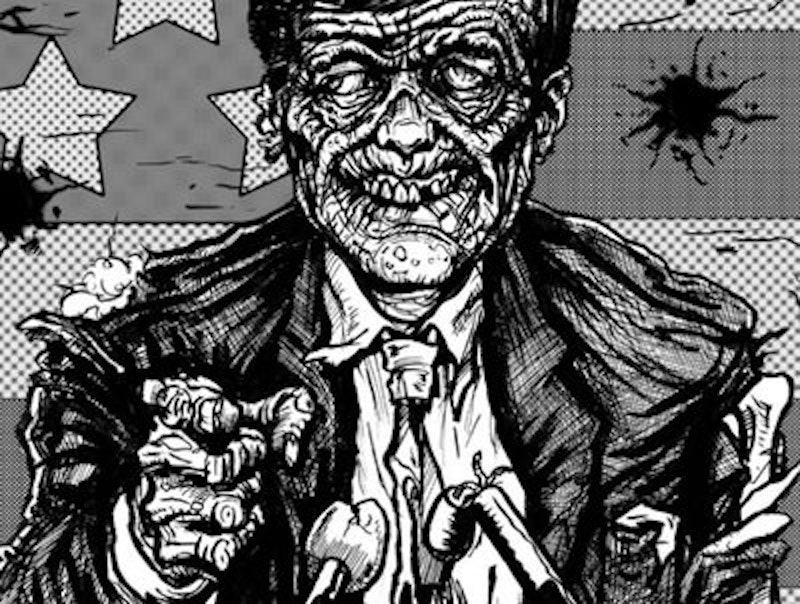 I’ve enjoyed watching Bernie Sanders grill Trump’s cabinet nominees, quoting the President-Elect’s campaign promises verbatim and demanding to know if those promises will be fulfilled. The man’s a pit bull. He’s there in the ring, slugging it out for truth, justice, and the American Way, just as he has all his life. The empty pantsuit has vanished. I’d like to think that she’s on a terminal vodka bender up there in Chappaqua, cursing the walls as they close in on her. I’d say she has a much better chance of becoming the New York State Vegetable than Mayor of New York City.

As a student of history with a particular interest in the machinations of the Deep State, I’m thrilled at the prospect of a president taking office under direct and open threat from the CIA, especially one as bold and cunning as Donald Trump. The CIA has operated in direct and flagrant violation of its charter since the year I was born. The matchless hubris of its open assault on the President-Elect before he’s even taken office will be its final undoing. The CIA’s meddled in domestic affairs long enough, and severely underestimates Trump’s vindictive streak and willingness to use every tool available to destroy his opponents. His ascent to power has been reminiscent of Sherman’s March, and Langley shall surely be his Atlanta.

Here’s the thing about New Yorkers: everybody thinks we think we’re better than everybody else, but they’re wrong. We are. New Yorkers have an intuitive grasp of the conspiratorial nature of power. Following the machinations of the Mulberry St. crowd is a popular hobby in the boroughs. Comparing the management techniques of Paul Castellano versus John Gotti always made for stimulating barroom conversations when I lived there. One thing that every New Yorker knows is that there’s no such thing as a fair fight. Everything you need to know about politics and power is laid out clearly in The Godfather.

If they were going to whack him, they should’ve done it months ago. They thought he was a joke. The entire establishment thought that its puppet candidate had a lock on the election. They underestimated Trump then, and they’re underestimating him now. Although I’m sure that the rank and file of the Secret Service is mightily relieved that they don’t have to deal with Hillary Clinton, the organization itself cannot be trusted. It’s a matter of historical record that it was the Secret Service that rerouted JFK’s motorcade down Elm St. that day, and their behavior captured on camera in Dealey Plaza raises a lot of questions. Trump clearly doesn’t trust them, and maintains his own network of private security contractors. He’s also been known to carry a gun himself. Imagine what would happen to the poll numbers of a president who greased his own potential assassin live on television. I have a strong suspicion that Putin’s FSB is also watching his back.

For the first time in a long time, I have hope for the future of this country. Trump’s campaign was reminiscent of the rise of Huey Long. The elites are attempting to smear and discredit the wave of populism sweeping the globe. Their neo-feudal vision of a world based on the model of Red China is under serious threat. Monetary wealth is fissionable material: the more you accumulate, the more likely it is to blow up in your face.