Greenwich and Canal: 200 Years and Counting

Landmarks on a bustling route. 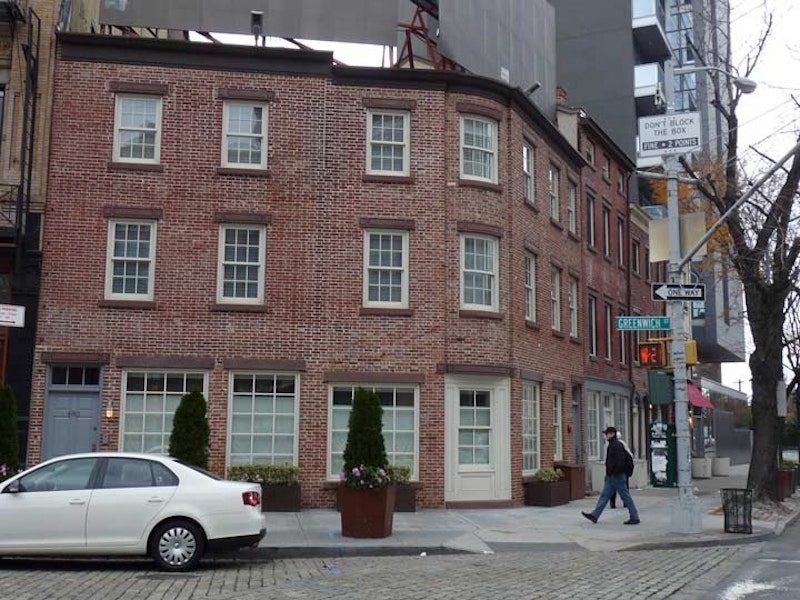 I'll admit it: Canal Street is not one of my favorite routes. In fact, I've never walked its entire length, and I'm not sure I ever will. It's a major truck route and the noise from honking vehicles, as well as the sheer crush of pedestrian traffic augmented by the hawkers and vendors, makes other streets more desirable walking destinations for me. 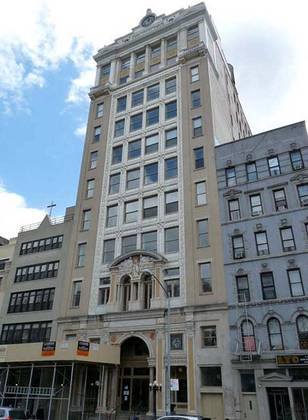 The road has its moments, of course, as on its east end we have Straus Square at East Broadway with the magnificent Jewish Daily Forward Building, with its bas-reliefs of Jewish Socialists Karl Marx, Friedrich Adler, Ferdinand Lassalle, and Friedrich Engels glancing accusatorily on passersby going about their capitalist business. Seward Park has its Carnegie Library and nonfunctional, though still magnificent, Jacob Schiff Fountain. The terra cotta Loews Canal Theatre is around the corner, Eddie Cantor’s home base; there are two layers of history there, as the ABC TV repair shop, which moved out years ago, still has a plastic-lettered sign in the style of the Swingin’ '60s on its façade. 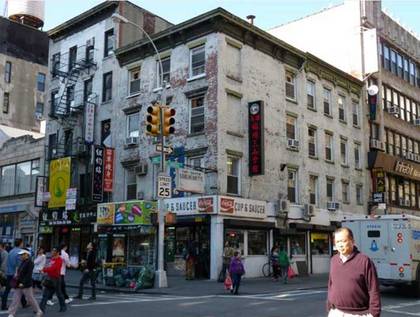 A hop, skip, and a jump to the west is Jarmulovsy’s Bank on Orchard, where a traveling salesman founded a bank with his own savings, catering to fellow Lower East Siders of modest means, but then was wiped out by complications from World War I. One of NYC’s last remaining old-school coffee shops, Cup and Saucer, is on the corner of Eldridge, the kind of place where your orange juice came in pointed paper cups supported by metal cup holders. There’s the magnificent Manhattan Bridge arch and colonnade, based by the architects on Paris’ Porte St-Denis and the Benini Colonnade at Vatican City, and the bronze dome of what was originally the Citizen’s Savings Bank at the Bowery. Come to think of it, a Canal Street walk between the Bowery and Straus Square might certainly be in the cards for my website sometime soon. But west of the Bowery? Sheesh!

Many New Yorkers are unaware of how Canal Street got its name. In the colonial era, there was a freshwater pond called the Collect in what is today’s Foley Square that at first was a source for New York City’s drinking water, but then became a dumping ground for garbage and animal offal, becoming so foul that the city was compelled to drain it and draw it off to the Hudson River (similarly used for dumping until the late 20th century). The resultant canal was long ago paved over and Canal Street built atop it, but the old canal is represented in subway mosaics near the token booth at the present Canal Street BMT subway station on Broadway.

I’m a bit better with the west end of Canal. In the spring of 1992 I worked at a type shop on Greenwich and Spring Streets, and at lunch I’d wander around. Similarly, during lunch breaks from Macy’s between 2000 and 2004, I’d take subway rides uptown and downtown with my camera, documenting scenes for Forgotten NY. Repeatedly, I found myself drawn to the junction of Greenwich and Canal. 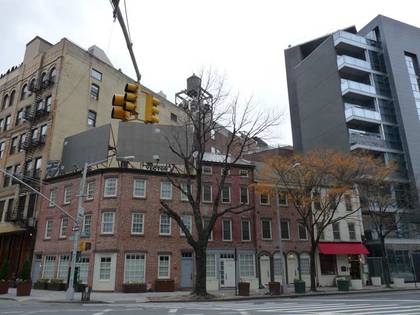 On the southwest corner, we find a quartet of three-story brick buildings, one with an attic. These days, they’re overshadowed by the hulking 471 Washington Street, where penthouse space sells for $22 million. The oldest of these buildings was built in 1818, making it 200 years old. These buildings may have been saved by the deterioration and decrepitude they had sunk into when I first encountered them in 1992; one was tenanted by a liquor store, whose sign, minus its neon, still hung there decades after it was closed.

The building on the corner, 502 Greenwich/480 Greenwich, is the one that was at least under construction in 1818 by John Y. Smith, a manufacturer of starch and hair powder, the Coty of postcolonial NYC, perhaps. Unusual for Manhattan, it had a rounded corner. Smith was deeded the land by descendants of Anthony Lispenard, who came over from France in the colonial period and eventually owned a large tract south of today’s Canal Street.

Its Federal-style brickwork was restored during the 2000s as new money came into Tribeca; all of the adjoining buildings have been refurbished.

Next door is #504 Canal, the newest of the quartet, constructed in 1841 in a Greek Revival style by Robert Stewart, a descendant of the Lispenards; its neighbor, #506 Canal, was built in 1826 by tailor John Rohr, this time in Federal style. 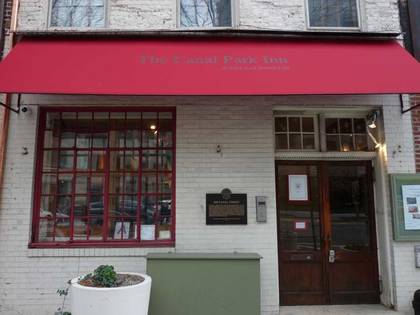 Though all four buildings have had commercial space on their ground floors throughout their long histories, only one does today, #508 Canal, which is a bed and breakfast called the Canal Park Inn. Along with its partner, #506, it was constructed by Rohr in 1826. Cleverly, the inn named its five rooms for families residing in 508 in 1850: Kennedy, Sinnot, Denot, Batby, and Flaherty. Rates range from $200-375 a night.

Crossing Canal and Greenwich is easier than normal for pedestrians. The stoplights are timed to produce a sequence in which both streets’ traffic are stopped by red lights, making for a Barnes Dance (named for its inventor, Coloradan traffic engineer Henry Barnes) in which pedestrians actually have free reign to cross catercorner or diagonally if they choose. The intersection is marked by a crosshatched marking. 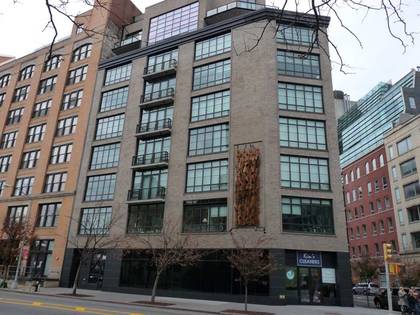 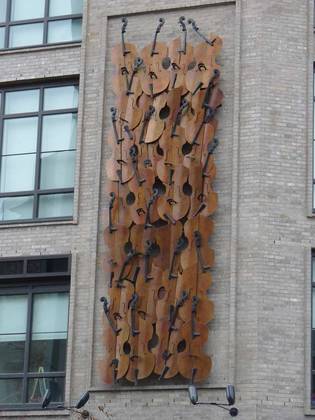 The building on the northwest corner of Canal and Greenwich is a seven-story brick building with wide windows and a penthouse. However, if you look closely, you see a rectangular bit of artwork that appears to be assembled pieces of violins and stringed instruments. It’s a tribute to French-born sculptor Arman (1928-1905) whose sculptures consisting of trash or found objects were known worldwide. Arman’s studio was at the site of 482 Greenwich, which was constructed in 2011 and is also called the Arman Building.