Jesus Is Not an Asshole

He would have gone Old Testament on your ass. 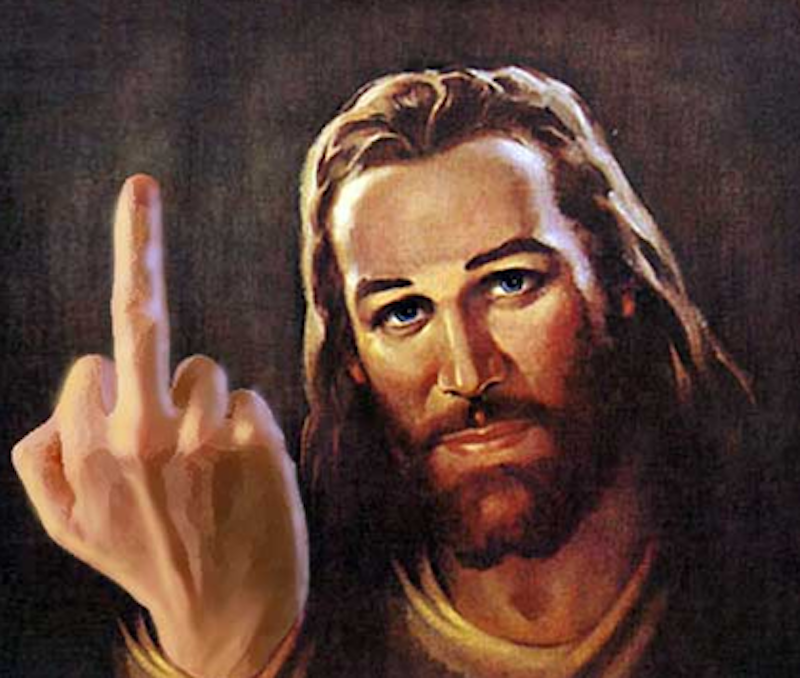 Just dropping you a line to thank you for completely fucking up my sister's funeral. Did you seriously think trying to convert 400 innocent mourners to your Bible-thumping trash was a good idea during a time of family crisis? We were naturally traumatized that she had died by suicide only a few days before, so in a moment of weakness we agreed to let our family member host the service at your used car lot of a church. And I'm calling you out for lying to me when I asked how long you'd speak and on what topic and you said "Briefly, on heaven" which apparently must translate in your extreme-Baptist cult to "For a very long time, on sin and hell."

Our family of eight grew up Catholic. None of us really practices that religion anymore; though it's nice the new pope isn't completely in the same dark ages we were accustomed to. We didn’t go to our childhood church for the service not only because none of us attends anymore, but also because we were concerned they’d be judgmental about the suicide aspect. But even some of the Catholic politics seem mild compared to your women-can't-wear-pants, gay-hating, no-party grimfest. And in Pennsylvania! I thought this ignorant shit only happened in parts of the South.

Although I was named after his mom, I don't claim to be BFFs with Jesus, but I have a feeling he’d hate your church. Demanding people who are sitting there crying over their lost loved one to renounce sin and find salvation and accept The Lord Jesus Christ as their Savior is ludicrous. Your "Love the sinner hate the sin" trope is bullshit too. Being gay is not a sin. Suicide is not a sin. How dare you come down off your ridiculous fake mountain of condescension and twisted Biblical interpretations and imply otherwise? Don't talk to me about the Bible. The Bible says many things written by men thousands of years ago and translated many times, but from my limited Catholic-school upbringing, I believe in general it contains messages of love and forgiveness. Jesus loved sinners and forgave sins and he sure didn't go around getting in people's faces at funerals and weddings and demanding that they ACCEPT HIM AS THEIR LORD AND SAVIOR RIGHT NOW DAMMIT AND ALSO GIVE ME MONEY. (That was slick the way you positioned me in the lobby next to the massive stack of forms for people to sign up).

Jesus would have punched you in the face for making sad people sadder, for making innocent people feel guilty, and for speaking far longer than He ever did in a sermon. In fact I'm pretty sure he would have gone Old Testament on your ass.

The only thing that kept me in my seat during your horrific Florida condo-style sales pitch (that never even once mentioned my sister) besides being physically tethered on either side by loved ones physically restraining me and my desire not to make a scene at a "church" or make the moment about me instead of my sister was her laughter. The sound of my funny, amazing, irreverent baby sister (the girl you didn’t say a single kind thing about) filled my head. She hated your particular brand of Kool Aid, and I could hear her laughing so hard at the awkward glances, whispered comments and rolled eyes of the many and varied religious denominations that you completely disrespected and offended.

So no thanks, preacher man. I will never raise my hand when you ask 10 times or ever be baptized in a hot tub of holy water at your false prophet compound. Jesus loves me and all the sinners and somehow even disillusioned cult leaders, I guess, but he doesn't expect any of us to be "saved" by the likes of snake-oil salesmen like you.