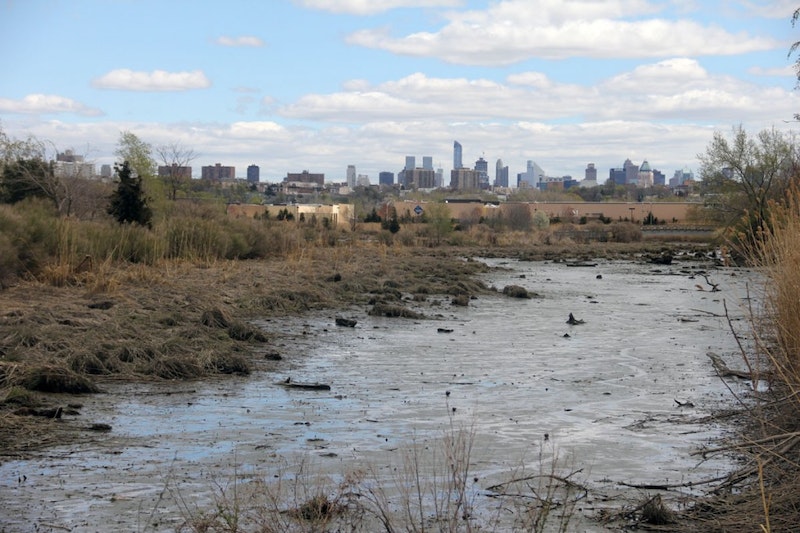 "If there ever was unloved land, this was it..."
—Anthony Depalma, from the New York Times article "Finding the Bottom of a Polluted Field"

A post-apocalyptic adventure is yours when you get on the PATH train at the Journal Square station to Newark from Jersey City. Inundating all sides of this commuter route are treacherous swamps, excessive trash, opaque water colored in just about any shade but blue, and an ever changing spray paint mural that coates nearly everything but the wild grass. Tangled weeds choke the skeletal factories and warehouses—tombstones marking the death of America's global manufacturing power.

By the mouth of the Passaic, running along the western edge of Newark Bay, the Hackensack River is an evil serpent rippling and heaving with fetid disregard. It reflects decades of careless industrial waste disposal. Here the river is nothing more than a watery garbage dump. Hearty seabirds steer cautiously to avoid landing on the poisonous water. These airborne rangers hover only to return to safe perches high atop the shambles where roofs are corroded slabs of metallic Swiss cheese and window sills brandish fangs of shattered glass.

Interstate 95 isn't far from here. Another iconic symbol of post-industrial boom and bust, its motorists find only sulphuric fumes and a blur of dirt and grime on the side of the highway, but for me there's much more. Whether riding along on the PATH or in a bus roaring across 95, when I look out over the brutal scene of Jersey's corporate relics I imagine a secret world where dusty shafts of light pierce cavernous interiors; grafitti artists are tethered to grappling hooks scaling faded facades in the dead of night; roaches, snakes, and rats slither and pad frantically among the mildewed piles of garbage and junked equipment that languish behind decrepit walls.

Surreal visions are not what enviromentalists think of when they consider the polluted wetlands and rusty husks that scar the counties of Essex and Hudson. Companies responsible for this devastation have recieved extensive federal penalties and harsh criticism from local community organizations and the press. During the 80s, home owners and other proponents of west Jersey City created an initiative to force the area's major industrial polluters to acknowledge negligent dumping practices and assume responsibility for cleaning up the mess. This ultimately led the federal government to take part in enforcing the clean-up, but that was a small victory. Over the past 50 years roughly 110,000 dump truck loads of chemical waste have soaked into the ground at these industrial sites just south of New York City, and the process of removing this muck will be anything but be quick.

What hope can exist for these Jersey wastelands? Will the apathetic masses blindly accept them as "The New Normal" just as they've accepted reality TV, GMOs, and many other monuments to unhealthy living? Will the future's green activists be incensed to fight harder than ever against pollution with the wastelands as a haunting reminder of an enviromental worst case scenario? Or will this staggering annhilation simply exist as fodder for the reveries of a bored commuter?