My Dream About Deborah Harry

And there was a lot else. 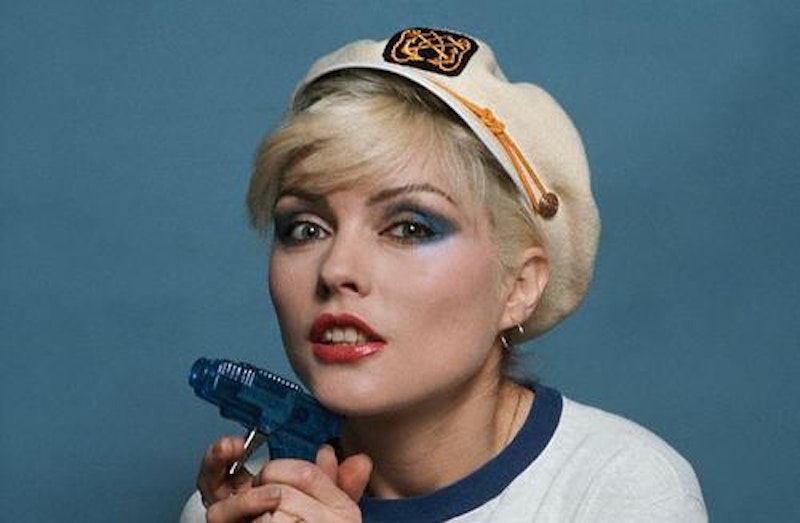 I slept a long time on my mattress, a futon that was doubled over, and I think my body weight had time to bend the mattress pretty sharp. The slope cut deeper and deeper, and eventually I felt like I was going to roll and fall, and that’s what I dreamed about. Then I woke up in the ragged morning after 14 hours sleep. The dream involved Deborah Harry, who showed her face as I clung to a steep dilemma. But the steepness and the clinging mark the dream for me. Harry had a star turn, a showcase part, but the dream gripped me in other ways. Everything was crowded, and if I put a hand wrong I’d fall a distance and die.

I say “hand” because there was no place for my feet. I was clinging horizontally, if that’s possible, and the distance beneath was like the drop from the highest tier of the opera house down to the ground. I suppose what I clung to was like an opera house balcony, or at least was something that protruded and was ranked up and down a wall, one on top of the other, as opera house balconies are. An open space like a stage waited below me and off to one side. A ceiling waited high overhead, vaulting like that of an opera house. There was, yes, a definite opera house feel to the set-up. Perhaps unhappy memories of childhood visits to the Met (my father loved opera) forced themselves into my mattress dream.

I was pinned by gravity against my ledge, and I felt the world tip over me. I was clinging and the world was going to make me fall. It had come to that. There was no way forward for me. I remembered there had been other occasions like this, a crew of them. Walking the hallways of my college (no, opera house—well, it had been both), that had been a bunch of bad experiences. Yanked down by gravity and threatened by falling, just as now, that had been a recurring condition. Now this, the same thing at its worst.

Deborah Harry appeared at my elbow. It was her face. Dreams sometimes make swaps, but not this time. Wide as a catcher’s mitt, scrolled as a cello, stretched taut because of her pair of luscious cat’s-eyes, Harry’s face stamped itself in the air. Possibly her face was stationed under a stewardess cap. If so, the cap was white with blue trim, and shaped to a snazzy, abrupt angle along the crown.

I was happy to see her, and I reflected that she has aged well. “Has,” I say, because my observation applied to real-life Deborah Harry, not just dream Harry. I was punctilious in recording that notation as I dreamed. Yet now, being awake, I wonder if Harry looks that good. I see her on Facebook, but those pictures are from 40 or 35 years ago. She had some body. I never appreciated it at the time, perhaps because I didn’t see the necessary pictures. But that little body really packed a lot. Also, I’m happy to see evidence that people remember her. She’s there a lot in my feed. Back when Blondie was going on, I thought they’d get respect decades down the road, the way the Ronettes did. Now look.

This feeling was bodied forth in my dream as the reflection that she has aged well. Perhaps my dream self is more decorous than my waking self. It puts a polite gloss on things. I know that, to my dream self, it was very good that Deborah Harry had shown up. The university had sent her; she had some official capacity as hostess or counselor. The bright cube where I lived with my roommate bounced into place. I lay on my white pill of a futuristic cot and wondered about the dark windows with their tilted, molded white frames. The clustered lights of the Internet’s mind rolled wide and the abyss unlatched. I was going to fall to the bottom of the opera house.

The ragged morning broke around me and I wondered how I lived. Then I began my day.