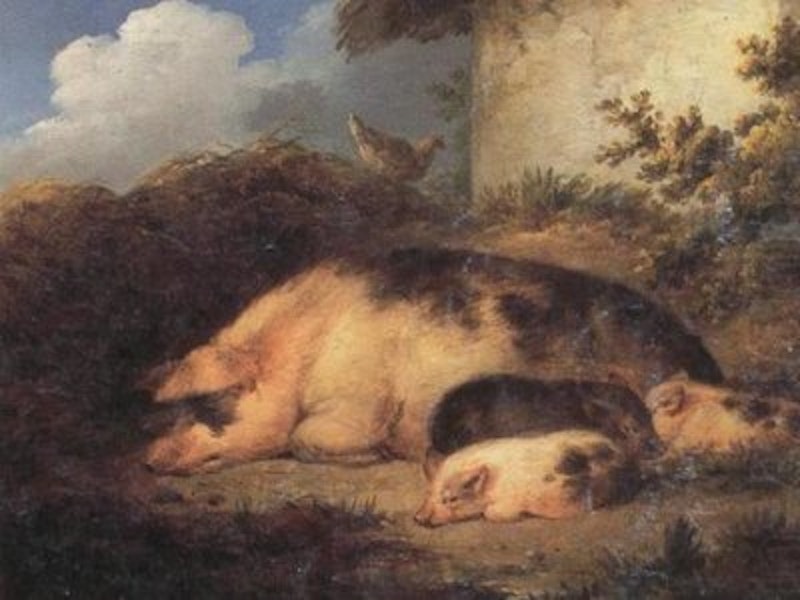 Winter brings the start of the swine littering season here at our Benedict Option community in rural Indiana. Inseminated in January, our several sows are by now, in mid-February, showing a distinct plumpness that is pleasing to the eyes of God the Father, the Logos.

Now is when we’re at pains to ensure that the sows bear their pregnancies to term. A miscarriage is a matter of dollars and cents for us; a good part of our income here comes from our organic pork, which we peddle to the several “farm-to-table” restaurateurs who have, believe it or not, sought us out as purveyors to their modish eateries in Cincinnati and Cleveland.

The first signs of a miscarriage throw our small community into action. Brother Aiden hurries to set up the incubator, in which we’ve raised more than one premature piglet to strength over the years. Sister Marie readies the buckets of warm water in which she’ll dunk the undersized piglets after their extraction from the womb and before we nestle them into the straw that lines the incubator’s floor. Walking as fast as my feet, snug in their sandals and hemp socks, will carry me, I hurry to the root cellar, there to gather up the clean sheets of burlap that Mother will use as wadding.

Mother, of course, is the midwife of this operation, and it’s during emergencies like this that I see her at her best. Up she runs, in her waddling gait, to the bellowing sow, all 400-odd pounds of it, as it writhes in its discomfort. Falling to her knees in her homemade dress, Mother yanks her sleeve up to the shoulder with the decisive motion of a steelworker readying for work, and plunges her bare arm into sow’s bleeding vagina.

First her arm disappears to the wrist; then to the elbow; then to a point somewhat above the elbow, but still short of bicep. The vagina bleeds, palpitates. Hidden from our sight, meanwhile (but not from the sight of God), Mother’s fingertips and knuckles knead the walls of the birth canal, softening it, making it pliant, loosening it to facilitate the egress of the piglets.

Ah—let God now show his mercy. The sow, wallowing on its side in the filth, snorts, her eyes rolling back in her head, the bristles on her snout standing up with stress, the nipply tips of her half-a-dozen udders rigid from an inflow of the estrogen her suffering body is producing.

But look—now Mother has, in fact, plunged her bare arm as deep as her bicep. The sow huffs and snorts, or maybe that’s actually the breathing of Mother that I hear. It’s hard to tell. Mother and the sow seem almost one being now. They’re locked in a symbiosis that testifies, I think, to the interrelation of all God’s creatures in this vale of tears we call the world.

An almost-human scream issues from the sow. There’s a sound as of the slopping of wet sponges as, all at once, the vagina expels the clear-yellow fluid of the breached amniotic sac. Here the burlap wadding comes in useful. Mother shoves pieces of it into the vagina to seal the space between her upper arm and the twitching vaginal lips.

Mother, part of her shoulder now obscured by the porcine vagina, now pants, her eyes glazing over as she moves her arm like a pump handle, trying to dilate the uterine membrane deep within the sow.

Ah—now comes the time of miracles. The sow grunts. Mother sticks her tongue out of the corner of her mouth, a sign of concentration, as she plucks from the miscarrying womb first one piglet, and then the next, and then the next, and so on. All are pink and squealing, and not one is longer than my hand. Marie dips each into the bucket and then passes it to her husband, Brother Aiden, for placement in the healing incubator.

Finally Mother shoves wads of the burlap into the sow’s still-bleeding hole. It will be necessary to call Dr. Fischer, the Jewish local animal physician, because my own veterinary skills are not up to this emergency—to the stitching of the vaginal orifice, the administering of porcine sedatives. I am “off the hook” tonight as far as the healing arts go.

No, my job is to give succor now to Mother. Slimed with afterbirth, she extracts her arms from the pig’s birth canal and, overcome with fatigue, falls to the floor in the sty—weary, but conscious of having fulfilled her duty under heaven, and the stern responsibilities of a Benedict Option wife.