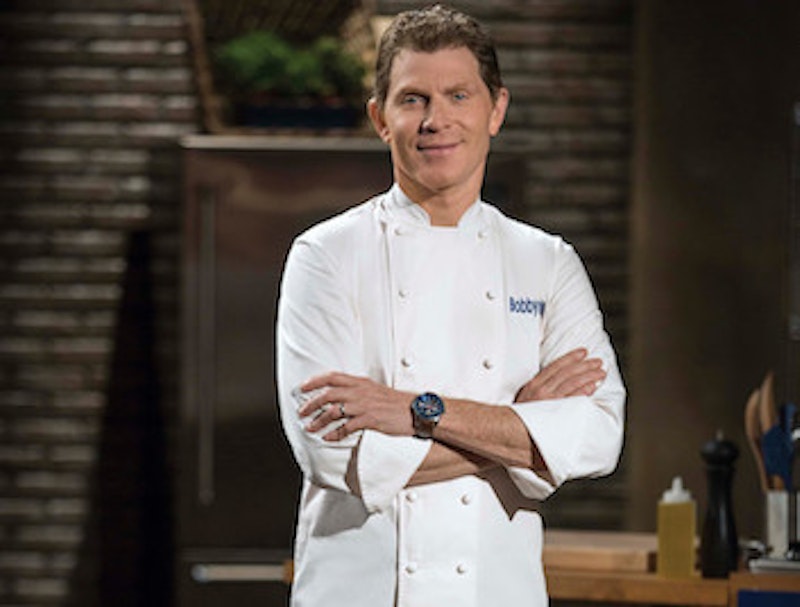 It’s slightly annoying to enter a coffeehouse and see a bunch of large, pasteboard posters describing the process of roasting coffee beans. This is particularly difficult to bear when the descriptions are accompanied by close-up photos of coffee beans, spilling abundantly out of a large metal scoop.

But how much worse it is to spend lunch at Bobby [Flay’s] Burger Palace! On every wall you see statements like this: “We are defined by the promises we keep, not by the ones we make.” Or, “No one of us is as great as all of us.” There are also prominent photos of Bobby Flay cooking, a vivid reminder that he’s still a working chef, far from retirement, despite having successfully merchandised and syndicated and franchised his culinary secrets and (by all appearances) his own innermost philosophical being.

Like the Christmas music that plays only once when we’re in the shop, but slowly conspires to drive the employees there mad, there’s no doubt in my mind that the employees at Bobby’s Burger Palace are instructed in the virtues of teamwork (“No one of us is as great as all of us!”) and punctuality (“We are defined by the promises we keep!”) as part of their job training and performance reviews. They are subject to Bobby Flay’s own disfiguring belief that in order to be a great man, one must be an aphorist, regardless of what has brought one fame or what limits might exist on the things one intimately knows. Of course, I’m interested in what makes Bobby’s Burger Palace significantly better than other places where the burgers cost twice as much. It’d be fine if the walls were full of cooking advice. Instead, by a curious logic, Bobby clearly believes that the more unrelated to cooking his aphorisms get, the better of a chef he must be.

Meanwhile, the most defining promise that Michel de Montaigne ever kept was a promise to retire: “At the age of thirty-eight… Michel de Montaigne, long weary of the servitude of the court and of public employments, while still entire, retired to the bosom of [the Muses]… where in calm and freedom from cares he will spend what little remains of his life.”

And it was under such circumstances that Montaigne was able to write, “We cannot be bound beyond our power and means. For this reason—that we have no power to effect and accomplish, that there is nothing really in our power but will—all man’s rules of duty are necessary founded and established [by our intentions].

Only a person who lacks all introspective capacity can act like Bobby Flay, denouncing the ego in a restaurant named after himself, and urging people to keep their promises without reflecting on the promises he himself has been forced to break. For example, Flay wore a t-shirt on air promising he’d never compete in another Iron Chef battle. He later made the following statement: “This past summer when I was in production on Iron Chef Showdown, I wore a T-shirt to have a little fun during my last battle this season. In hindsight, it was probably not the best decision… if I were asked, I’d be excited to return to Kitchen Stadium.”

His intention now is to be a philosopher without quitting his day job, and the resulting philosophy is harsh, hypocritical, and affected, without greatness of spirit, dog whistling at his employees so that they do a good (a great!) job. Montaigne knew better.

The ironies of philosophy are endless, and one of them is that it must be disinterested to be fully in the interest of its readers. When Shakespeare wrote, “The quality of mercy is not strained,” in The Merchant of Venice, he meant that it shouldn’t be painful to show mercy. But the meaning goes further still, implying that one’s hours of pleasantest freedom are the wellsprings of merciful ideas, including Montaigne’s suggestion that we cannot be expected to do more than we are able. But we hardly know what we’re able to do if we lack the time to reflect on it. I learned something from Bobby’s little wardrobe malfunction. So did he. “In hindsight, it was probably not the best decision”—I wish that line was currently blaring from every one of his franchised walls.