Yacht Graveyards and Half Kill 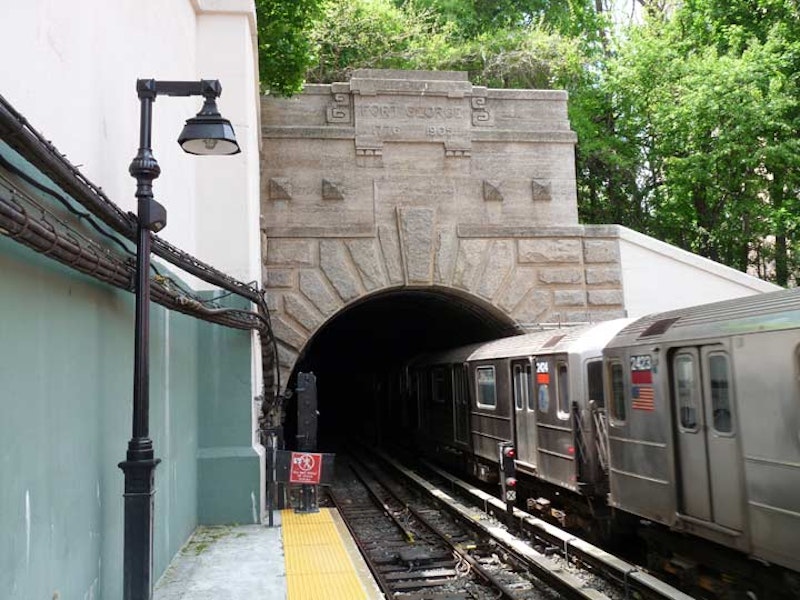 Dyckman is a big name in upper Manhattan—bookkeeper Jan Dyckman arrived on these shores from Westphalia (then under Prussian control) in the late-17th Century, married into the Nagle family and gradually controlled much of upper Manhattan Island. His descendants were prominent US patriots—the British burned down the original Dyckman homestead at what became Broadway and 204th St., and his great grandsons built the farmhouse that still stands today.

Street names in Inwood were named for early area settlers such as the Dyckman, Nagle, and Vermilyea families—acre for acre, there are more named streets in Inwood than numbered. Dyckman St. stands in for 200th St. (when the IND Subway was built in the 1930s, its Dyckman St. station on Broadway was given the number 200, but that’s the only place you’ll find 200th St. in Manhattan. And, there’s no 200th St. in the Bronx, either—it’s replaced by Bedford Park Blvd).

At Dyckman St., the IRT subway emerges from its deepest depth at 191st St. to an elevated trestle—testament to how varied the terrain is in northern Manhattan.

The tunnel mouth under High Bridge Park is inscribed Fort George and the dates 1776 and 1905. Fort George, originally Fort Clinton, was built by US patriots around where George Washington High School stands at Audubon Ave. and W. 192nd St.. Though the British eventually captured the fort, Colonel William Baxter and his Bucks County Pennsylvania militia were able to hold off British general William Howe’s troops long enough for Washington’s troops to escape to New Jersey.

In 1895, entrepreneur Joseph Schenck and his partner, Marcus Loew (later founder of the movie theater chain) opened the Fort George Amusement Park at the end of the old 3rd Ave. trolley line on the fort site. However, as “civilization” crept north to Inwood, the park’s noise became increasingly distasteful and the park came under attack from arsonists, who unsuccessfully tried to burn down the park in 1911, but succeeded two years later. By then Schenck and Loew had sold their interests. The site then became part of High Bridge Park. 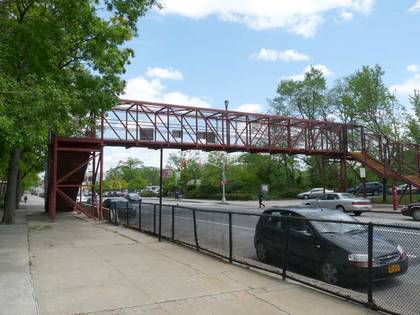 The upper Manhattan map is a strange beast, as two north-south avenues that don’t get north of W. 59th Street resume their courses north of Dyckman St.: 10th Ave., which runs north to Broadway and W. 216th, and 9th Ave., between W. 201st and 208th and again from W. 215th to Broadway and the Harlem River. Oddly, the two avenues, which are on the West Side near the Hudson River south of 59th, find themselves on the far east side of the island near the Harlem River here.

10th turns into Amsterdam Ave. at W. 59th and runs continuously to Fort George Ave., which curves to join Fort George Hill at St. Nicholas Ave. I don’t have the measurements, but it’s likely that 10th/Amsterdam is the longest avenue that travels along the island’s Y axis, beginning as it does at West St. and Little W. 12th. 9th Ave. becomes Columbus Ave., but only goes as far north as W.110th at Morningside Park.

At one time, 6th, 7th, 8th, 9th, 10th and 11th all continued to upper Manhattan as numbered avenues, but beginning in the 1890s city fathers started messing around with the names, as 6th became Lenox, which became Malcolm X Blvd. 7th and 8th hung in there above Central Park till the 1970s, but then became Adam Clayton Powell Jr. Blvd. and Frederick Douglass Blvd.; 8th became Central Park West along the park, while 10th became Amsterdam and 11th became West End Avenue. For those latter, there must’ve been Manhattan snobbery involved, as the downtowners wanted to differentiate themselves from the uptowners, or vice versa.

In any case, I followed Dyckman east to 10th and found a very difficult pedestrian crossing, as the Harlem River Dr. dumps its traffic onto 10th and Dyckman here. Fortunately the city has provided a pedestrian bridge. 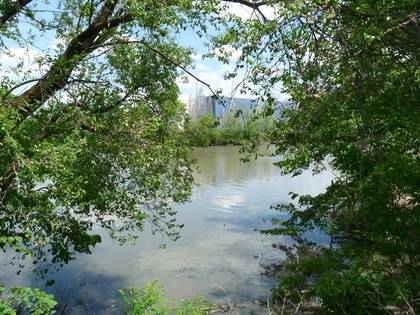 Entering through a parking lot driveway on the east side of 10th Ave., I found the semi-naturalized walkway beside Sherman Creek, a short inlet of the Harlem River north of High Rock Park. When I started Forgotten New York, ForgottenFan Jon Halabi tipped me off to Sherman Creek, which was marked “marina” on a then-current Hagstrom map. What we found was a yacht graveyard full of discarded ketches and pleasure boats. I wasn’t able to get close up and didn’t have an 18X zoom lens, so the yacht graveyard was recorded only in my mind.

The spot marked “marina” on the old map is currently occupied by a massive Con Ed substation on Academy St. east of 10th, which has been made even more massive the last couple of years. 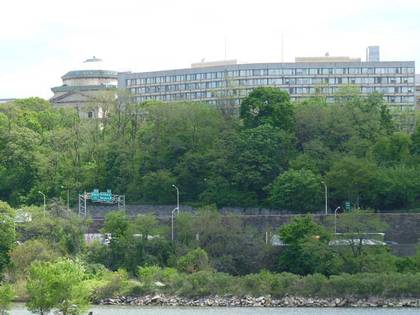 The short trail along Sherman Creek’s south side affords views of the Bronx as well, including campus buildings of Bronx Community College and the dome of the Hall of Fame for Great Americans. Word recently came that the city wants to expand its composting program, but one of the few compost heaps in Manhattan can be found in the eastern part of Sherman Creek Trail. Another compost area is in northern Central Park near the Andrew Green Bench—you can tell by the odor.

The creek, as well as Sherman Ave., is named for a settler family in the early-19th century about which not much is known. Sherman Creek was originally called Half Kill (the Harlem River was the Great Kill). 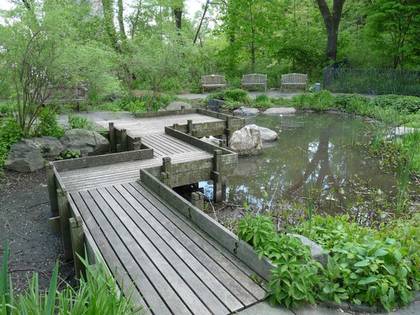 Swindler Cove Park is a recent addition to the Sherman Creek public area, found south of the creek along the mighty Harlem and east of the Harlem River Dr. An oasis of native natural habitats, Swindler Cove features an urban forest, one of the only saltwater marshes on the island of Manhattan’s shoreline and an abundance of wildlife to explore along the Harlem Riverfront. Today, thousands of children from neighboring P.S. 5, other New York City schools and youth from the neighboring New York City Housing Authority’s Dyckman Houses development participate in a wide spectrum of environmental educational programming while using Swindler Cove as an outdoor classroom.

From 1996 to 1999, NYRP removed tons of garbage, rusted-out cars, sunken boats and construction debris from this waterfront site. In 1999, in partnership with the State of New York Department of Transportation and landscape designer Billie Cohen, the New York Restoration Project, a nonprofit organization founded by Bette Midler and dedicated to the restoration of spoiled natural and wild places around the city, transformed the land into a lush array of restored woodlands, wetlands, native plantings and a freshwater pond, accented by a wood-planked pathway. 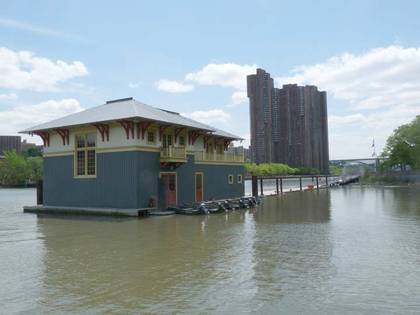 The Peter Jay Sharp Boathouse, which sits on s a 300-ton barge anchored to the Harlem River bed, was constructed by Robert A.M. Stern Architects (designed to resemble the Central Park Dairy with board and batten styling) and opened in June 2004. Storage for racing shells is provided and the boathouse is the setting for rowing lessons along the river.