The Many Arches of St. Patrick

St. Patrick is the quintessentially New York Catholic saint, and he's hard to avoid in the city. 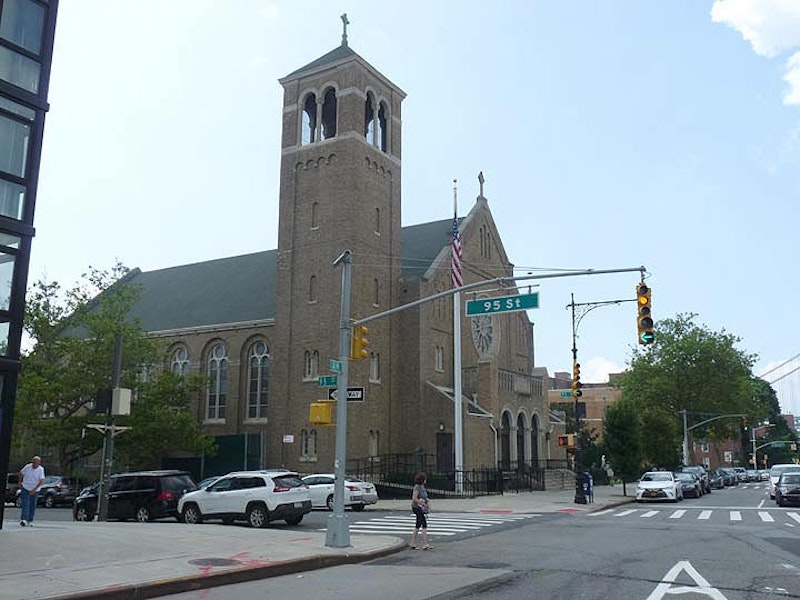 St. Patrick, the fifth-century Briton who helped bring Christianity to Ireland, is the quintessentially New York Catholic saint, mainly because of the massive parade held in his honor every year from the 1700s through 2019, with lessened celebrations the past two years due to the pandemic. There are a number of St. Patrick’s churches and cathedrals around town. Here are some of them, including an unexplained oddity.

I lived in Bay Ridge for 35 years after my birth at Maimonides Hospital in Borough Park in 1957. Gradually my connections have slipped away. My parents died in 1974 and 2003, various relatives who lived in Bay Ridge or Borough Park have died or scattered to the wind, and many of my favorite dining spots like Zeke’s Roast Beef, the Tiffany Diner and the Nathan’s on 7th Ave. and 86th St. have closed. I periodically visit for checkups and cleanings at my dentist’s office. I’ve been going to the same office since 1964 and have been treated by only two dentists the entire time. The latter presided over the removal of my front four and the ensuing bridge and plate.

Bay Ridge’s Catholics have their pick of three churches: St. Anselm on 4th and 82nd, St. Ephrem’s on Fort Hamilton Parkway and 75th St. (Bay Ridge Parkway) and this one, St. Patrick, the oldest of the three. The church was instituted in 1849 to serve the Fort Hamilton area’s many Irish laborers and their families, and has also served Catholic military men and their families stationed at the fort. The present church building was completed in 1925, the same year the BMT was extended to 95th St.; its school building on 4th Ave. and 97th St. opened in 1958. 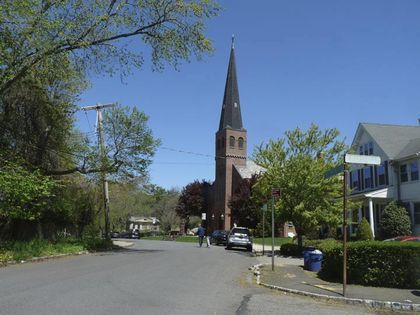 Historic Richmondtown, or Richmond Town (both ways seem correct) sits near the geographic center of Staten Island, far from any major parkways or expressways, but at the confluence of three major roads: Richmond Rd., which points east toward the ferry to Manhattan; Arthur Kill Rd., which gets you west to Tottenville; and Richmond Hill Rd., which climbs up and down the hills of LaTourette Park and golf course to New Springville and the Staten Island Mall.

Richmondtown’s collection of colonial-era buildings from all over Staten Island has been one of my favorite parts of town for years. Knowing the toll modernization was taking on the island, and perhaps presciently imagining the devastation to be wreaked on Staten Island’s old and out-of-the-way places by the opening of the Verrazano-Narrows Bridge, Historic Richmond Town was established in 1958 by the Staten Island Historical Society and the City of New York at the area surrounding the junction of Richmond, Richmond Hill, and Arthur Kill Rds. Colonial-era homes from the island were moved to this 25-acre site over the ensuing years.

As far back as 1685, the area was an important crossroads, and a town called Cocclestown was established, named for the oysters found in Richmond Creek and other area streams. The town gradually gained in importance and became the county seat, and a town called Richmond and later, Richmond Town, evolved.

Just outside Historic Richmondtown proper is St. Patrick’s Roman Catholic Church, on a country lane, sidewalk-free St. Patrick’s Pl.. Constructed between 1860 and 1862 and little altered since, it’s an early example of Romanesque Revival. It received Landmarked status in 1968. 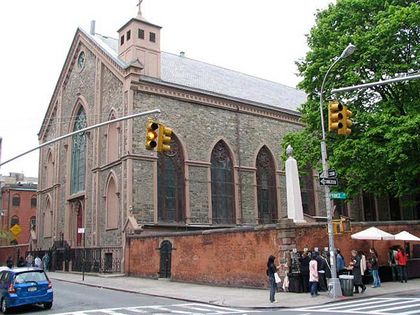 St. Patrick’s “old” Cathedral, 260-264 Mulberry St. between Prince and E. Houston, is called “old” to differentiate it from its “newer” cousin uptown, St. Patrick’s Cathedral at 5th Ave. and E. 50th, designed by James Renwick Jr., opened 1878 and finished in 1888. Old St. Pat’s, NYC’s original Catholic cathedral, is older, having started construction in 1809 and completed in 1815, making it one of the oldest buildings in Chinatown/Little Italy. In March 2010 Pope Benedict XVI announced that it would become Manhattan’s first basilica, a church that has been accorded certain specific and ceremonial rites only the Pope can bestow. The Cathedral was one of the first buildings in New York to gain Landmarks designation in 1966. It was remodeled after a fire in 1868 with cast iron columns that support a timber roof.

The Cathedral was built at a time when Roman Catholics were under attack in NYC, as depicted in Martin Scorsese’s Gangs of New York. A brick and stone fence was built to surround the church and its accompanying churchyard because attempts were made to burn it down during the mid-1800s. Scorsese served as an altar boy in his youth here, and the church was used for several scenes in The Godfather and Gangs.

The Basilica was designed by architect Joseph François Mangin. It’s 120 feet in length and 80 feet at its greatest height. Its organ was installed in 1852. A wealth of mortuary vaults lie beneath the church, and the churchyard’s most famed interment was Venerable Pierre Toussaint (1766-1853), a Haitian immigrant and former slave who became an abolitionist, philanthropist (he made his money as a hairdresser for NYC’s upper crust) and devoted himself to the ministrations of NYC’s poverty-stricken, opening shelters for orphans, a credit bureau, employment agency and refuges for priests during the turbulent period for Catholics mid-century. He was responsible for some of the funds that went to build the uptown St. Patrick’s Cathedral, in whose vaults he was reinterred 137 years after his death by John Cardinal O’Connor.

“Dagger John” Hughes, the first Archbishop of the Diocese of New York, was originally interred in the Old St. Patrick’s churchyard. Though his remains were moved uptown to the “new” St. Patrick’s at 5th Ave., he’s memorialized here. “He became known as ‘Dagger John,’ both for his following the Catholic practice wherein a bishop precedes his signature with a cross, as well as for his aggressive personality.”

In the Civil War the Irish-American brigade, the Fighting 69th Regiment, counted many of its members worshipers at St. Patrick’s; the regiment lost many men at the Battle of Bull Run. Archbishop John McCloskey was made the first American cardinal by the decree of Pope Pius IX and he received the Cardinal’s red cap here on April 27, 1875. 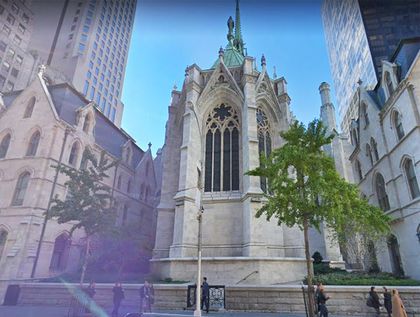 The “new” St. Patrick’s Cathedral is the Capitol Building of the Catholic Church in New York City. The twin-spired Gothic Revival edifice, occupying the complete block between 5th and Madison Aves. and E. 50th and 51st Sts., was constructed in stages between 1858 and 1879, with its twin spires completed in 1888. It’s architect James Renwick Jr.’s crowning glory in New York City. It has hosted popes and sent off pop stars and baseball players to their great reward.

But what really concerns me about St. Patrick’s Cathedral are a number of creatures scuttling up the rear of the Lady Chapel on the Madison Ave. end. The Things are not Renwick’s, as the Lady Chapel was built in a complimentary Gothic Revival style between 1908 and 1909 by architect Charles T. Matthews. The Catholic Church is known for its veneration of Mary, mother of Jesus, and many large churches or cathedrals have separate, attached chapels dedicated to her, known as Lady Chapels. The term “Lady Chapel” is itself an archaism, because it preserves the old English usage of not ending a possessive with an “‘s.” 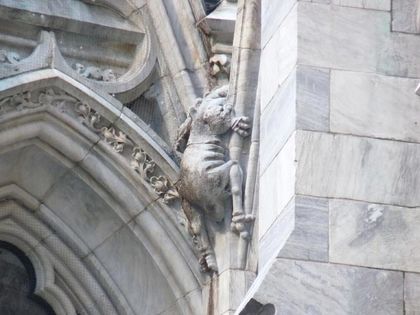 The Things are headless, or their heads cannot be seen. They appear to be hairless, and have three toes on each foot. The back legs have an obvious joint, and their backs appear to have ridges, the type seen on the foreheads of the second incarnation of Klingons in the Star Trek canon. Priests and Cathedral personnel working there call them “pigs,” but no earthly pig resembles these Things, which seem to belong to no known phylum.

The Things correspond to a tradition among the cathedral builders of Europe going back to the Renaissance or even earlier to the Medieval period: the depiction of demons trying to gain access to the church. Gargoyles belong to this tradition, but they’re usually built to drain off excess rainwater. Architect Matthews originally placed gargoyles on the rear of the chapel, but they proved unstable and were removed during a 1940s renovation. Matthews had to be inveighed upon by Cathedral officials to not make his demons and creatures too terrifying.