In Praise of Street Food

It's not even a contest. 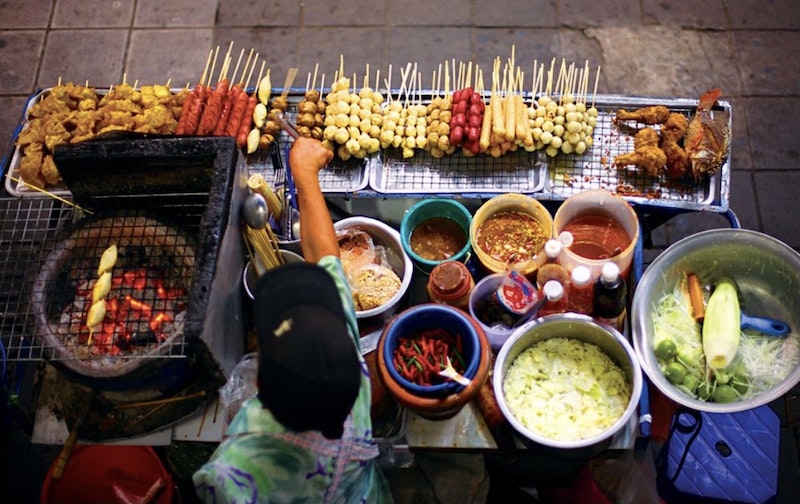 New York City was the first place I'd ever seen "street food." Up in my neck of the woods, New York State's Southern Tier, the concept was unknown. And although I thought NYC was a magical place from my first visit there as a teenager, the city's street food never impressed me. I saw hotdogs soaking in warm water, big salty pretzels, and dull-looking kabobs. The "dirty water" Sabrett hotdogs were too unappetizing to even try. The one soft pretzel I had was all dough. They try to jazz it up with mustard, but mustard doesn't belong on a pretzel. The kabobs were okay.

Back in those days, I didn't realize how far I'd have to travel to discover how great street food could be. I moved to San Francisco, where I don't recall seeing any street food, and then Tokyo, which has some decent street eats—notably takoyaki (deep-fried octopus fritters shaped like golf balls), and okonomiyaki (savory pancakes with meat, cabbage, with a sweet and sour sauce). There's even "street beer" there. I loved the convenience of having a Kirin beer vending machine just a few steps from my front door when I lived in Tokyo.

Then I took my first trip to Thailand and soon realized that I'd made it to the El Dorado of street food. On a scale of one to 10, I give Bangkok a 10, and New York a one. While street food is an afterthought in NYC—something to grab because it's there and you're hungry—it's a major part of daily life in Bangkok. And unlike New York, many of the street food places have tables and chairs, so you don't have to stand and eat.

In New York, a street vendor places your "dirty water" dog on a bun; in Bangkok, you can watch a woman with a street cart crushing chilis and lime rinds with a mortar and pestle, and then she'll add fermented fish paste and palm sugar while preparing a green papaya salad with flavors that pop. The fragrance she creates perfumes the city's air. And even those residents who live in the worst parts of town are picky about their street food, because the quality is uniformly high. If you want to dine out every night on a shoestring budget, Bangkok is the place to go. I'd give Hong Kong the runner-up award in this category.

In 2018, Michelin’s Bangkok edition awarded one star to Jay Fai's street food place (up to a two-hour wait) located in Bangkok's Old Town. Jay Fai, a 75-year-old woman known as the "crab omelet queen," is the most famous street food chef in the world. I wasn’t familiar with Jay Fai, who cooks wearing goggles to protect her eyes from the hot oil she cooks her omelettes in, during my several visits to Bangkok. She's known for making a knockout crab curry stir fry (poo phad phong karee) in addition to her signature omelette, and one of the best tom yum soups in Thailand. I give this dedicated chef, who was brought up in a slum as the daughter of an opium addict, extra credit for wanting to give the Michelin star back. It's brought her unwanted gawkers with cameras who she says aren't interested in her cuisine.

The most familiar Thai dish to Americans and the rest of the world, pad thai, originated in a street stand, but almost every Thai restaurant in Thailand and abroad serves it at this point. "Street food" in Thailand isn't really a separate designation. It's just great food that’s served outdoors. But to the Thai government, it is a separate designation, because the powers that be have decided that street vendors are impinging on public property—sidewalks. Thai politicians are working to rein in street food purveyors, but they're messing with an established ecosystem that they don't understand. A study by the Beyond Food project, which researches the socioeconomic impact of street food in Bangkok, found that if street food consumers were forced into finding alternative ways of dining, they'd have to work an extra day each month to pay for it. Many Thais in Bangkok rent living quarters without kitchens, so limiting street food would hurt them the most, but even Thais with middle to high incomes eat an average of eight to 10 meals per week on the streets. In Bangkok, where there's a stark division between the haves and the have nots, street food adds a needed dose of egalitarianism. And then there's the hand-pulled egg noodles with barbequed pork, Massaman curry, sticky rice with mangoes, deep fried bananas, Thai fish cakes, and much more.