He Has This Under Control

Jeff Chon’s Hashtag Good Guy With a Gun is an excellent new satirical novel out now via Sagging Meniscus Press. 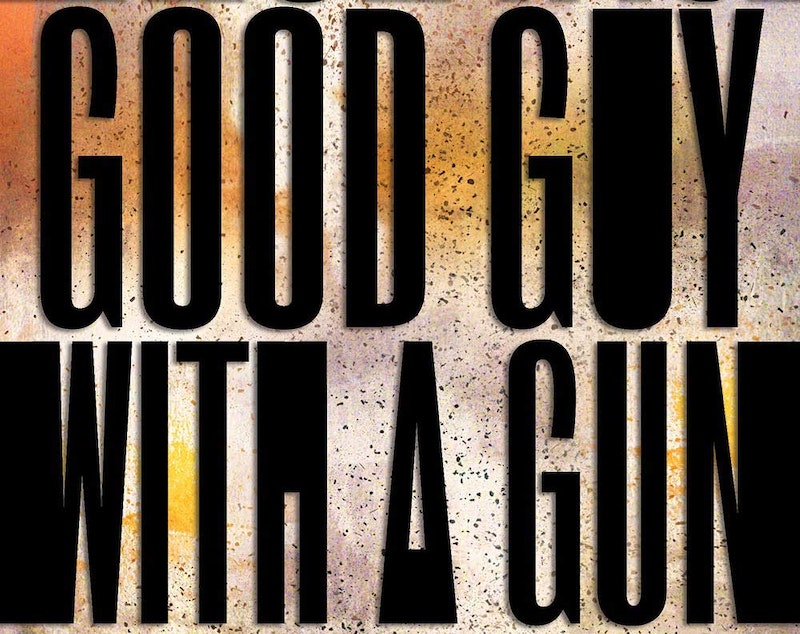 Jeff Chon’s Hashtag Good Guy With a Gun is a fast, smart, non-linear, satirical novel that begins with the real-life PizzaGate incident from 2016, except now transposed to the West Coast, with a liberal high-school teacher, Scott Bonneville, as the conspiracy theorist. From this one fictional incident, the “Ground Zero” of his life, the story expands outward into the past and the future to explore Scott’s motivation, and our own attraction(s) to so-called conspiracy theories.

Hashtag follows Scott and two other characters who all happen to originally be from Korea, an almost incidental detail except for two Korean myths or parables that inform the larger picture of motivations, free will and determinism. One mythical “creature,” Jeoseung Saja, is a sort of Korean Grim Reaper, except not-so-grim, and without the scythe, escorting people to the underworld when they die. He/it haunts an older homeless man, Jae, who already has visions of creatures trying to get out of the people he interacts with. Jae mistakes (or not?) Scott for Jeoseung Saja in an alley out back of the pizza parlor. Scott, though adopted by white parents, understands Korean culture enough to know who Jae’s talking about, and this may or may not influence what happens when he goes inside.

Most of Chon’s novel follows Scott, whose interest in urban legends, and real legends about writers like J. D. Salinger, plus his collapsing professional and romantic lives, leads him to conspiracy theories to the point where he becomes convinced that a child prostitution ring is unfolding in the basements of a chain of pizza parlors. Scott buys a gun and goes to the nearest restaurant, determined to hold employees hostage so they’ll show him what’s really going on. Only the fact that another gunman beats him to the scene by a few minutes turns him from being the shooter to the hero.

This event happens very early on. The rest of the novel is a series of flashbacks and flashforwards, involving all three characters, including Yu-Jin, the pregnant manager of the restaurant. Early on in Hashtag, Scott gives his philosophy of life:

The past isn’t behind us at all. The past is all around us... You hate history because you think it’s the past... But the fact is you’re on one side of a chain and everyone else in this book is on the other. You’re connected by all those silver links. You need to realize how strong that connection is... So the thing that happens affects your life in some way then. Well, that’s history. If you can’t connect with the things that happen, the things that are still happening, then you’re not thinking hard enough... Scott’s mother had treated the past like a room she’d left, a door she’d closed behind her... But the things we experience in those rooms, the things we see, we carry with us into the present because we carry inside us every room we’ve every walked out of. There is no past. There’s only the present, and those things we consider to be done and gone stay with us like barnacles clinging to the side of a ship.

The problem, challenge, or joke is that if we use Scott’s way of seeing life as an eternal present as the key to how to read Chon’s novel, while also acknowledging that Scott’s logic is a little off, we have to admit that we may be a little off too. And this is the brilliance of the novel, because it’s true: it’s not just QAnon that has their “conspiracy theories,” centrist-liberals and Leftists do too. Witness the last four years of RussiaGate, including the Mueller Investigation: Liberals just couldn’t conceive that Trump could get elected in America without the help of outside forces. Therefore, logically, it must be Russia. Or China! But most definitely Russia!

As Chon writes: “That’s the problem with logic in an age of foolishness, [it makes] us lose all sense of perspective.” Chon is the court jester here in Hashtag Good Guy With a Gun, accusing us all—Right, center/liberal and Left—of losing our perspective. That’s a tame way of putting it: America is the shithole country that Trump tried to scare us about.

And that’s why Hashtag Good Guy With a Gun is a very American novel, and could only be a satire, capturing the feel of the four years of the Trump administration which isn’t going to be any less foolish under the Biden administration. Centrist/liberal readers, potentially Chon’s core readership, are going to have to acknowledge his satire. Maybe they won’t figure it out. The novel isn’t hard to read or understand: Chon’s style is clever and funny, filled with pop culture references, and urban myths like: Was Mr. Rogers really a marine sniper? Was Captain Kangaroo really a marine sergeant in the assault on Iwo Jima?

But Chon includes enough wild true things, especially about J.D. Salinger and Catcher in the Rye, that readers will be left wondering what other statements or “facts” are true and what aren’t. Which is the point: it’s hard to tell today, and we certainly can’t trust anyone in the mainstream media, neither with pop culture trivia or whether, for example, Syria really gassed its own people (it didn’t, but the U.S. government really wants you to think so, they can build a gas pipeline there).

Hashtag Good Guy With a Gun is so good that one forgets it’s out through a small independent publisher: Chon probably isn’t making any money on this. I hope someone will buy the movie rights. Credit’s due to Sagging Meniscus Press for putting it out, but woe to all of us readers who may be missing out on all kinds of great novels because we’ve simply never seen them on the front tables of bookstores.

—Order from your local independent bookstore, or directly from Sagging Meniscus.