Downing St. is one of the Village’s more obscure routes. 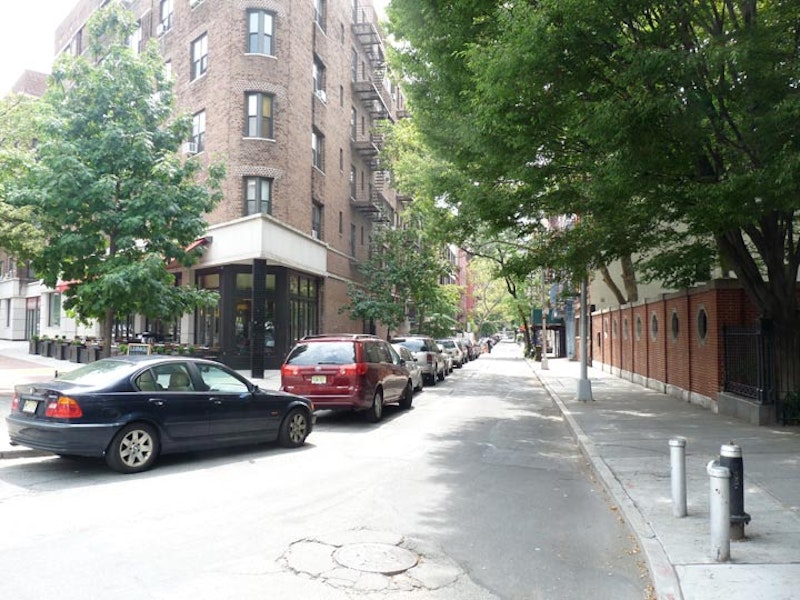 In 1992 I had a short-lived job at a print shop on Greenwich St. in the far West Village, in a building that was razed five years ago. I’d take the train to W. 4th and go southwest in the maze of Village streets to Greenwich between Charlton and Spring. There was one street that was the most convenient and I’d use it more than any other street: Downing.

It’s one of the Village’s obscure routes. It’s not in the Historic District so there’s not much online about it—if a street is in a Landmarked district, the city posts PDFs describing every building on every street in the district. But the wisdom of Yogi is pervasive. “You can observe a lot by watching.” And, a cursory look at Downing St. will reveal much. 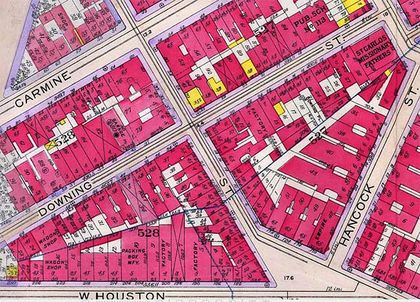 On this 1909 Bromley atlas plate of Downing St. notice several dwellings lining the street that are marked with X’s. In the legend, an X means a stable or garage. We can determine that Downing St. once served as a place to stable horses. Carmine St., one block north, is wide and Downing St. likely served the businesses and homes there.

On the right side of the map is a street that no longer exists; Hancock St. was absorbed by 6th Ave. when it was extended south when the IND subway was built along it in 1928. 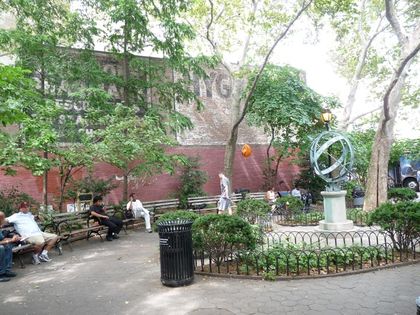 The construction of 6th Ave. created some odd-shaped spaces. Churchill Square, named for Winston Churchill (his mother Jennie was born in Brooklyn, and his grandfather Leonard Jerome was a successful stock speculator, railroad builder and sportsman who built the Jerome Park Racetrack, later Jerome Park Reservoir, and was the namesake of The Bronx’ Jerome Ave.).

The public park where Downing and Bleecker Sts. meet 6th Ave. has been a public park since the 1920s, and in the 1930s Robert Moses added a kids’ playground to its rear. The park itself was designed by with George Vellonakis and incorporates garden spaces, a gated iron fence, and a metal glove called an armillary mounted on a pedestal.

The rear wall of the park is interesting, since it contains a pair of “ghost ads” for the vanished Avignone Pharmacy, complete with a CH exchange, likely for Chelsea, and for Hygrade Beef Franks. 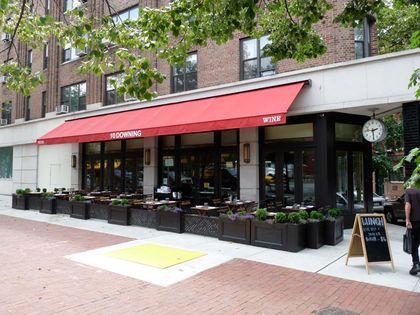 10 Downing (now Café Clover) was a winery on 6th Ave. at the corner of Downing; the winery is gone, but today the building it’s in has the address 10 Downing. The naming of Manhattan’s Downing St. has been speculated about by historians for many years. Some say both Bedford and Downing Sts. are named for the ones in London, but those streets don’t intersect, though they are both in the Trafalgar Square area.

London’s Downing St., where #10 is the Prime Minister’s residence (hence Churchill Square) was named for Sir George Downing, who changed political affiliations like the rest of us change shirts. He was one of Harvard’s first nine graduates in 1642. He returned to England and joined up with Oliver Cromwell in his overthrow of the Crown, becoming minister to The Hague and France. After Cromwell’s death he joined the Royalists, and Charles II returned him to The Hague, representing England again; along the way he betrayed a friend who was a colonel in Cromwell’s forces, sending him to the executioner.

Downing was Britain’s envoy to the Netherlands in 1674 when “New Orange” or New Amsterdam was handed over to the British (this time for good) in exchange for Surinam. A tenuous connection, but perhaps real. 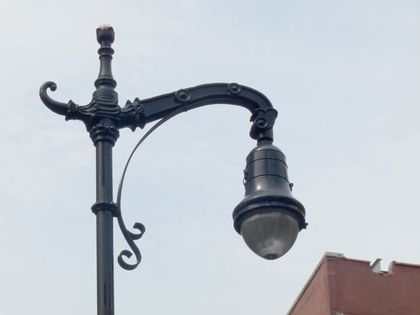 Some years ago, Downing St. was given a set of Type F posts; a series of early 20th-century lampposts was named by the letters A through G. The ubiquitous park posts, flocking by the thousands, for example, are Type Bs. These, the Type Fs, could at one time be seen in their own thousands on NYC’s crosstown side streets, but only a few originals are left. About 25 years ago, Spring City, a lighting business in Pennsylvania, used the molds for these old lamps and devised new versions, which NYC’s Department of Transportation has been using ever since. 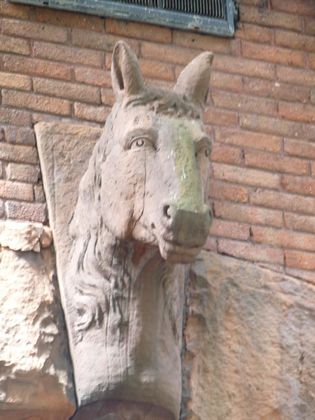 #49’s old stable status is marked by ole Dobbin grinning above the arched doorway. There was a time, in the 1960s, when the western section of Downing St. between Bedford and Varick was in the crosshairs of Robert Moses, who wanted to build Verrazano Street between the intersection of W. Houston and 6th Ave. west to Varick in order to accept traffic from the wide and busy Houston. This would have meant a lot of demolitions.

Verrazano St. would also have been a feeder road toward the proposed Lower Manhattan Expressway. The project actually got under way in 1962 when the city began buying property and condemning buildings along the proposed route. LOMEX was killed by community opposition, and so was Verrazano St.