Down At The Arcade

It was rare to see kids running around after dark back then, but we did. 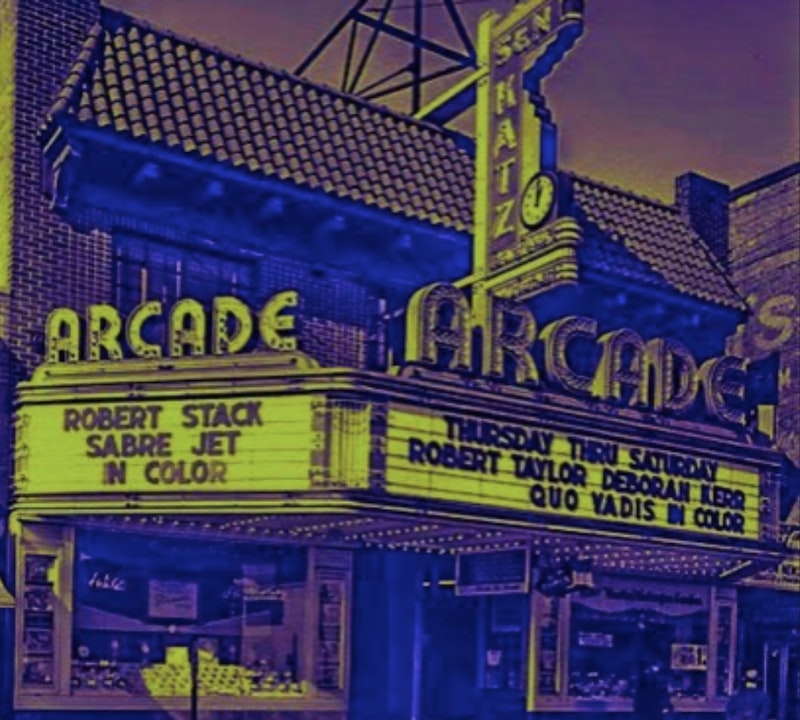 Saturday afternoon movie matinees were a coming-of-age ritual that flaunted innocent adolescence. The highlight to the end of the school week. For most kids growing up in Baltimore’s Hamilton neighborhood, the Arcade Theater was the first childhood mecca. This majestic movie house stood at the intersection of Hartford Rd. and Hamilton Ave. in the middle of a once vibrant shopping district. Directly to the heart of my old stomping grounds.

The Arcade’s marquee pulled you in, attracted to its neon glow and twinkling star-like light bulbs. Our theater was an idea machine that constructed ageless dreams. The make-believe world where changing realities abound. Seated inside the darkness feeling forever young, until the movie was over and back to the drudge of the real world.

On those chilly nights when our breath hung in the air like cigarette smoke, we’d stroll by the Arcade on the way to Kresge’s five-and-dime or Reads Drugstore soda fountain next door. It was rare to see kids running around after dark back then, but we did. It was the 1960s and we thought we were wild and free. You could feel the warmth emanate from the marquee lights above. There was an electric hum as shoppers gawked along wide sidewalks stopping to see what was playing as the aroma of buttered popcorn wafted through the long midway that led to the street.

The Arcade lobby displayed bold color posters covering the walls to advertise the attractions. Hand-lettered placards and painted artwork plugged local businesses. Candy machines stood near the lobby and popcorn concession counter. The floors were buffed like smooth marble. We’d slide across them with a long running start. Deco-style lighting enhanced glass storefronts on both sides of the Arcade. Kids didn’t care about the gauntlet of shops. Our objective was entertainment. There was a shoemaker and an old wooden shoeshine stand with its Black Cat shoe polish sign, a reminder from past Jim Crow days. There was a barbershop, jewelry store, gift shop, art store and a tailor/cleaners combo among others. The Hamilton Newsstand still stands in the building next door. These days the newsstand sells lottery, Keno, porn mags, candy and cigarettes. No news to be found.

The theater exit went out into a back alley on Hamilton Ave. That’s where kids like my lifelong friend Michael Gentile held the exit door open so we could sneak in to grab a front row seat before the show. An old man in a baggy usher outfit would stumble run down the aisle waving a flashlight when he could catch us in the act.

I still hear the intermission cartoon jingle playing in my head. The hard sell pitch of dancing/singing hot dogs, sodas, popcorn and candies doing a rumba line with stylized comic human faces and appendages. “Let’s go out to the lobby, let’s go out to the lobby and get ourselves a treat.” The first intro into a confusing world of mind control, and unsubtle subliminal messages pushing sugar, salt and grease. Like a junkie waiting for those movies to begin, it felt so good to be bad.

Most kids could barely handle the anticipation of fun on those Saturday mornings. There’re not many sounds louder than a bunch of kids yelling and screaming in a packed movie house. The live show and raffle occurred every month before the quarter double feature matinee. It was a big production with teaser trailers before the movie that included newsreels, cartoons and giveaways. Then the real show started on the big screen and things got quiet. It could be westerns, horror flicks or the latest comedies and Disney offerings.

But the main reason I liked to go to the early matinees was for the bicycle raffle promoted by Pete’s Cycle Shop, located close by, just down the block near my house in an old drab green asbestos shingle house. The shows had a hokey magician in top hat and tails, sometimes a puppet show or a goofy clown as the opening act. A deadpan announcer made a point of telling all the kids in attendance to be sure to remember to tell all your moms and dads about all the new toys, dolls, baseball gloves, BB rifles, or bicycles you’ll see at the raffle. And remember, one lucky kid out there has the winning ticket. It was legal gambling for children.

There was a time when Baltimore was full of movie theaters. The long-gone Avon Theater was just around the corner from the Arcade. It featured silent films with live organ accompaniment. Movies were so popular there was even a boat cruise out of the harbor, The Adams Floating Boat Theatre, which showed films stopping at ports along the way on the Chesapeake Bay from 1914 until 1941.