The life and times of Hawaiian icon Eddie Aikau. 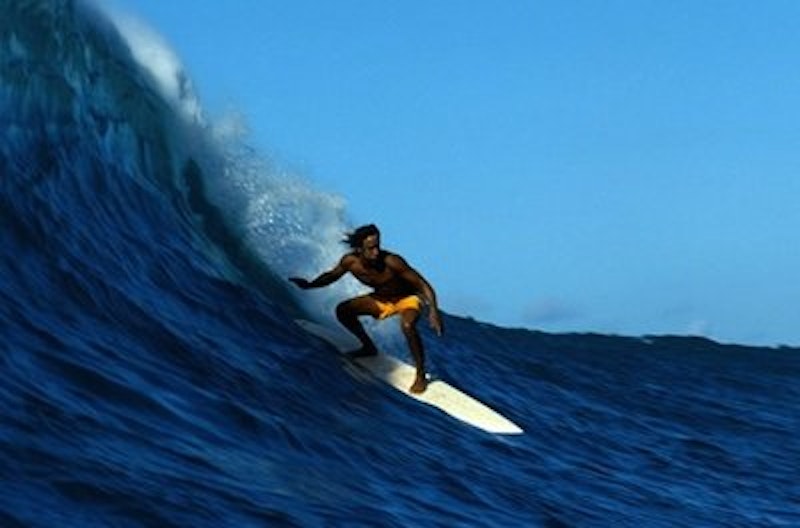 "Eddie Would Go." I kept seeing this inscription on t-shirts and bumper stickers when I moved to Maui over a decade ago. I’d wonder: Who is this Eddie and where would he go? Eddie, I’d soon discover, was the legendary Eddie Aikau. Where would he go? Read on and you'll find out.

Aikau was born in Hawaii in 1946, and went on the become one of Hawaii's greatest "watermen." A waterman is a special breed of Hawaiian—one who’s completely at home in the water, participating in any number of water sports. If the surf's not up, the waterman doesn’t fret, as the ocean provides much more than well-formed, cleanly breaking waves for him. Having said that, nice waves make the waterman happier than just about anything.

Aikau was a denizen of Oahu's storied North Shore, where the waves can get up to 50 feet high in the terrifying, magnificent winter swells. He was no ordinary surfer; he went to where the waves were big. The North Shore is the big wave surfer's Mecca—a seven-mile stretch of beaches where three of the premier big wave surfing competitions in the world are held every year.

Waimea Bay has the scariest surf on the North Shore, so that's where Aikau gravitated to. The beach's waves are so intimidating that nobody even dared ride them until surfing pioneer and hoale (Hawaiian for anyone not from Hawaii, or "white person") Greg Noll and a handful of his banzai buddies sucked it up and did it in 1957. Waimea Bay is the kind of place where surfers go to just marvel at the waves, fantasizing from the safety of the shore about tackling them one day. The thrills it provides are mostly vicarious, except for a few of the more skilled and fearless dreamers who eventually summon the courage to actually ride the giants.

Aikau was a natural at Waimea Bay, looking right at home on 40-foot waves that most surfers don't want any part of. These waves are all business. They are not to be trifled with by amateurs, under possible penalty of death. Plenty of bodies have washed up on this beach's shores over the years, and Aikau nearly paid the price on at least one occasion, but he didn’t let this stop him.

Waimea Bay was so far outside the norm when Aikau began surfing there that it didn't even have lifeguards. After one too many drownings though, town officials began looking for a waterman to hire for the lifeguard position. Aikau was already pulling people out of the treacherous waters on his own time, so he was the obvious choice, and he went on to make over 500 rescue attempts without a failure.

Beer-filled G.I.s on R&R from the Vietnam conflict, stoked up with liquid courage and lacking the requisite water skills, would brave Waimea's treacherous waters, only to soon wish they were back in Da Nang in the middle of a firefight. Aikau would pull them out over and over again, often braving raging ocean conditions. Sometimes it was the same guy more than once. Being stupid didn't mean you deserved to lose your life in Aikau’s book, for he was a "protector.”

When brash Australians made a splash at the North Shore in the 1970s with a particular brand of surfing, their cockiness sometimes spilled over into downright disrespect for the Hawaiian surfers. The Hawaiians, however, had had so much of their culture stripped from them by this time that they weren’t about to put up with this from a rude bunch of haoles. Surfing was just about all they had left. The situation got so tense that the Aussies were eventually afraid to leave their North Shore motel rooms. Aussie surfing star Wayne "Rabbit" Bartholomew had already been badly stomped on the beach by angry locals, and he and the rest of his crew lived in fear for their lives after this incident, until Aikau intervened as a peacemaker, defusing the situation with his firm but gentle style and the gravitas he had acquired at a young age.

Aikau finally achieved his elusive life's dream by winning the Duke Kahanamoku Invitational Surfing Championship (aka The Duke) when he was 31. His spirit was ever restless though, leading him to his final, fatal adventure in the Pacific Ocean the next year. The Polynesian Voyaging Society had decided to build a traditional double-hulled boat and take a 30-day, 2500-mile journey from Hawaii through Tahitian island chains—the same route the Polynesian migrants took when they came to Hawaii. Aikau joined the expedition, but the boat soon developed a leak, and he decided to get on his surfboard and paddle the 12 miles to shore for help. Aikau was never seen again, claimed by the waters he loved, and doing what he always did—trying to help people. Even the largest air and sea rescue operation in Hawaiian history couldn’t find him.

The Coast Guard, however, did manage to rescue the sinking boat and all of its passengers soon thereafter, adding another tinge of bitterness to his death.

Aikau now has a big wave surfing competition named after him at Waimea Bay. It's called The Quicksilver in Memory of Eddie Aikau—affectionately known as The Eddie. During the first Eddie contest, the huge waves made for treacherous conditions. Surfing star Mark Foo, while tournament organizers were considering cancelling the contest, assessed the waves and said, "Eddie would go." That's where the now famous phrase originated. Ironically, Foo surrendered his life to the Pacific Ocean too, 10 years later, when he drowned surfing the fearsome Mavericks in Half Moon Bay, California.

Aikau is iconic now, with his legend transcending his merely being a great waterman. He's an example of how to lead a purposeful life, guided by the traditional concepts of Hawaiian culture. He became the full embodiment of what is known as the "aloha spirit," whose hallmarks are affection, peace, compassion, and mercy.

Hawaii suffered a terrible loss with the passing of Eddie Aikau. People with a spirit that huge and generous and pure come into this world so infrequently that their passing leaves a palpable void. The life lessons he left behind live on for eternity though, and the beauty of it is they are there for the taking. That's Aikau's legacy.