Cross signals from around the world. 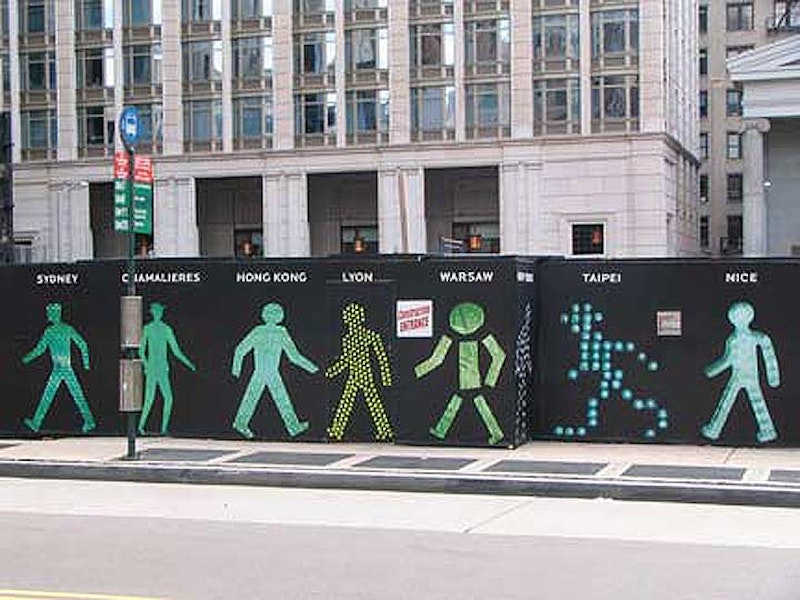 Before the massive 82-story, 937-foot tall monster building 30 Park Place was erected in lower Manhattan on Greenwich Street across from one of the oldest Catholic churches in the city, St. Peter’s on Barclay Street, built in 1838, its construction site fence was the location for one of the most intriguing, and informational, art exhibits the city has ever seen.

It was the second in a series called Walking Men 99™ created by Israeli artist Maya Barkai and curated by the Alliance for Downtown New York. Many pedestrian traffic signals throughout the globe have switched over to the red hand and green man signal system, New York City included, though the red "DONT WALK" (no aprostrophe) and white "WALK" signals were holding out in spots as late as 2006; pedestrian control signals like this had appeared as early as the 1930s, though they didn’t gain much frequency in New York until the 1950s. 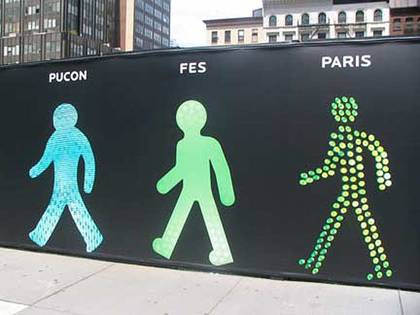 Most of the walking men were in green. They were about evenly divided between green dots and solid shapes. In NYC, at least, the green dots have shown a proclivity to burn out after a few months (and longevity had been promised). For some years, a pair of artists known as Thundercut has been putting vinyl pants, dresses, jewelry, etc. on the walking (wo)men. Some, though, are in gold and blue. Pucon is a town of about 21,000 located in Chile several hundred miles south of the capital, Santiago. Fes is the second largest city in Morocco, with a population of approximately one million. 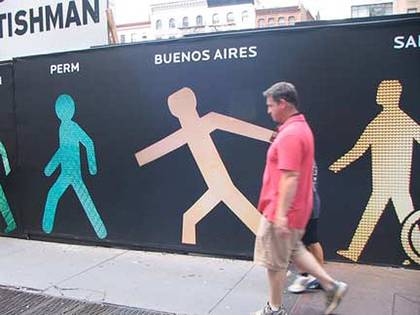 Most of the walking men reminded me of Eck, the two-dimensional creature from the old Outer Limits TV show. The Buenos Aires walking men are apparently running to catch up with something, or merely hurrying until the light changes and the street is taken over by speeding cars. 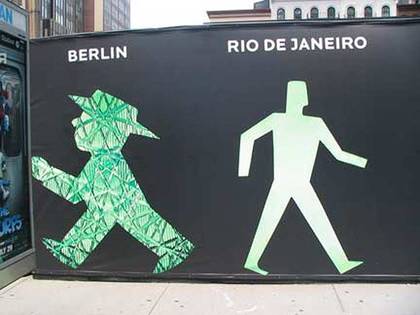 The Berlin walking men were rather older and stockier, and wore fedoras. Contrast to the Rio walking men, who looked like Charles Atlas models. Perm is a city in western Russia, with a population of almost one million. For a few decades in the 20th century, Perm was known as Molotov, after a Stalin protege. The famed gasoline bombs known as Molotov cocktails were so named by Finns defending against a Russian invasion in 1939. 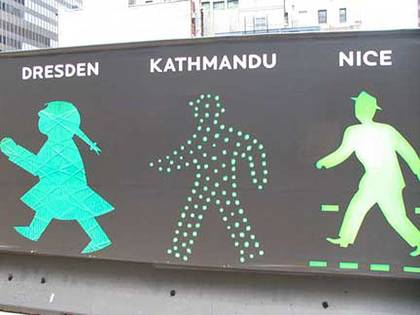 There were a few, but not many, walking women. Dresden, Germany uses a pigtailed girl. The Nice walking men are some of the more detailed—you can make out a hat, suit, shoes. I don’t think a lot of Kathmandu residents wear this style of flat brimmed hat, but you never know. 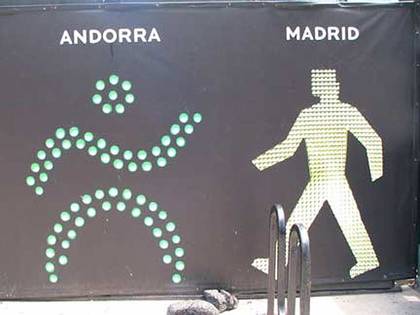 As a rule, cities are represented, but smaller countries were depicted under their own names. Andorra, a small country in the Pyrenees Mountains between France and Spain, has a capital city, Andorra la Vella, but perhaps these rather weird walking men with bowed legs are in use throughout the country. 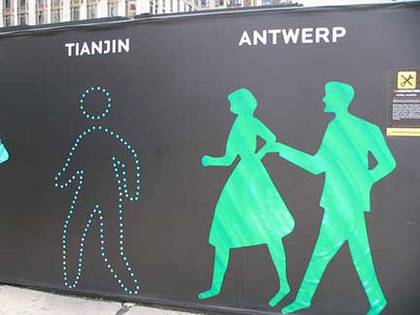 Tianjin (formerly Tientsin) is one of those huge Chinese megalopoli with a metro area population of over 12 million. The city played a pivotal role in the Boxer Rebellion and was occupied by Japan during WWII. Its walking men are rather wimpy and ill-defined. In Antwerp, a man grasps a woman’s arm to guide him across.

An exhibit like this couldn’t have been popular in California. As Missing Persons sang, "nobody walks in LA."