Cry Macho is another unique and moving film from 91-year-old Clint Eastwood. 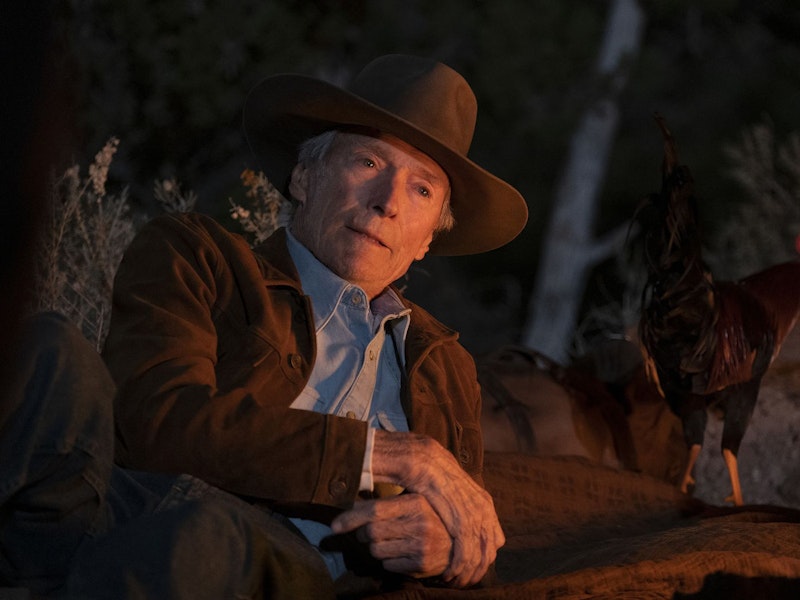 I went to a movie theater near the Baltimore City/County line to see Cry Macho on a Sunday night at 6:45. I was the only person in the ~200 cap room, with all of the armrests turned up, the last show of the night. I got there early, and while I was reading, one of the employees poked her head in. “Let me know how it is!” I told her I would. Have the Clint Eastwood “stans” been “grooming” members of Generation Z to learn to appreciate the twilight work of nonagenarian—a word that everyone writing about this movie learned recently—and dispel the popular conception of Eastwood as a tired reactionary? My God… some people are going to be very upset…

My review of Richard Jewell, Eastwood’s previous film as director, was too harsh. I still think Olivia Wilde gave a terrible performance, but she was the one cartoon in a movie full of real people. I was also put off by the way Wilde and screenwriter Billy Ray treated her character—Kathy Scruggs, a real person since deceased, just like Richard Jewell. Her family was furious, and it was all too rich coming out of a movie ostensibly about how the media and the American government are vampires preying on the “little people.” Scruggs material aside, Richard Jewell is a powerful movie about exactly that, the bloodsuckers waiting for anyone with any kind of energy or decency.

But it was Eastwood’s 2018 film The Mule that turned me around on his recent work. I thought 2016’s Sully was awful, and still do, and I skipped The 15:17 to Paris, but what struck me about The Mule was its ineffable lightness and grace, with a generosity of spirit never spelled out at length but palpable in every scene. No one makes movies like this in America now, and even if someone wanted to, they couldn’t match the character and quality of a film made by a man in his late-80s and early-90s. Eastwood’s admirable way of working—single takes, a film a year, diversity of stories—could just be that, admirable, very faint praise, but these movies are good. More than that, there’s something in them that knows, almost as immediate and impossible to articulate as the feeling of standing by a riverbed while the sun sets.

Because that’s what these twilight Eastwood movies are: the cinematic equivalent of sitting by a babbling brook. That’s not an insult or a criticism—I’m so bored of movies that when something or someone comes along that makes me feel something new, no matter the emotion, I want to see more. I want people to reconsider what they might think about this or that person. After the happenstance private screening, I left the theater and saw the person that poked their head in. “So did you like it? We’ve been back here slandering Clint Eastwood the whole time.” I understand why: besides being one of Hollywood’s token conservatives, he’s been something of a joke ever since the 2012 Republican National Convention, when he talked to an empty chair, addressing Barack Obama.

According to Mark Halperin and John Heilemann’s book Double Down, Eastwood winged his remarks at the RNC, infuriating Mitt Romney’s staff, and while he acknowledged that he didn’t do a good job, he shook it off and left. He moved on, but his image in the popular consciousness has been fixed for nearly a decade: possibly senile old man yelling at a chair, thinking there’s a black man sitting there. And that was only four years after Gran Torino, another Eastwood movie I hated at the time and need to revisit, where he played a bitter bigot “that used to stack gooks five feet high in Korea.” Again, coming in the fall of 2008, it hit a note that’s sustained since, with people that absolutely love it and people that loathe it and see it as emblematic and typical of Eastwood’s oeuvre and personal beliefs. It’ll also be regarded as Eastwood’s last great film whenever his obituaries, long since written, are published.

So they were “slandering Clint Eastwood.” With a poster like this, I get it. Going in blind, you’d think Cry Macho was a Western spin on Gran Torino, or at the very least a blistering and bloody movie with a high body count. No: this is a film that stops and fades to black when Eastwood’s character needs to take a nap. This is a film where the second lead is a rooster named Macho. This is a film made by a man now 91, a man who’ll continue making films until he’s no longer physically able, without ever phoning it in or screwing around like John Wayne. I told her in the lobby that Eastwood is not Wayne, he’s a lot smarter and more talented, with a healthier lifestyle and a much more mature and progressive perspective than any other Hollywood “conservative.” Who gives a shit whether or not Eastwood voted for Trump? Will it matter in 30 years when people will be able to pick from this, Unforgiven, Coogan’s Bluff, Escape from Alcatraz, For a Few Dollars More, and Million Dollar Baby? Among dozens and dozens of other films starring and/or directed by Eastwood? Of course not.

Nearly 1000 words in and I haven’t so much as tilted at the plot. Well, Cry Macho is a nice, simple movie, in the best way, and it’s about a man named Mike Milo (Eastwood) sent down to Mexico by a rancher friend played by Dwight Yoakam to recover the latter’s son from his abusive, criminal mother. Mike sets off, and quickly finds the boy (Eduardo Minett), and they’re on the road. What follows is an ambling adventure, interspersed with occasional bouts of violence and conflict, all of which are resolved quicker than in most movies. Again, there’s a quality to these late Eastwood films that makes me feel something new for once—that’s enough, I’m in. But this isn’t some avant-garde exercise in nondramatic storytelling, either.

Not everything has to have a “point.” Cry Macho certainly deals with “toxic masculinity,” a phrase that didn’t exist in 1979 (when the movie takes place), but already the subject of most revisionist Westerns, many Spaghetti Westerns, and even the later films of Classic Hollywood legends like John Ford and John Huston. Even Marco Ferreri made his own Bye Bye Monkey in 1978, whose original Italian title is Ciao Maschio, or “Goodbye Macho.” The sentiment is the same in Eastwood’s film: when the boy tries to act tough, Mike can only grunt that, “this whole macho thing is overrated.” Minett never really appears threatening or “corrupted”—he’s basically a nice kid from the beginning, with the predictable baggage of absent and abusive parents. He can’t trust Mike at first, but soon he, Mike, and Macho do form a bond, and I buy it.

There’s a scene about halfway through that stands among the best acting work of Eastwood’s 21st career: he tells the kid why he was sent down there, why he owed the kid’s father one. Mike lost his wife and kid, bottomed out, nearly died, and Yoakam’s rancher saved his life. A single tear runs down Eastwood’s cheek as he tells this story, and the top half of his face is obscured by the shadow of his cowboy hat. It’s an astonishing moment made all the more powerful by the sound of Eastwood’s voice, a sound I won’t describe as anything other than that of an old man. There’s nothing funny or ironic about it, and perhaps Eastwood’s insistence on continuing despite his age makes people uncomfortable because they don’t like looking at old people. This is astonishing to me, because one of cinema’s unique abilities is to mark time, and to dismiss this sui generis work as that of an “old codger” is going to sound awfully bigoted in a decade or two.

I’ve read so many goddamn reviews and comments about how rickety and “decrepit” Eastwood looks and sounds in this movie. Go jump off a bridge. I’d like to see anyone else direct, produce, and star in a feature film in their 90s, let alone during an unprecedented global pandemic. Unlike Paul Schrader, who was prevented from shooting “through hellfire rain” by his producers in March 2020, Eastwood actually did risk his life by making this movie. If he caught the coronavirus last fall? Making this movie? Oh my god.

But he didn’t. He survived. And so does Mike, and so does the boy, and so does Macho! There’s danger, but they make friends and spend time with each other, talking about life and past mistakes. Everything works out in the end. That’s a sop to the superhero fans who just want something nice to see and believe in. Go watch Cry Macho. Eastwood being propositioned by gorgeous Mexican women is far more plausible than anything in the Marvel Cinematic Universe. And if the final shot of his career ends up being that slow dance with Marta (Natalia Traven) in the bar bathed in golden light, I don’t think anyone would mind. I think that’d be just fine.