The “Candela Structures” nickname has stuck—it’s easier to pronounce and spell. 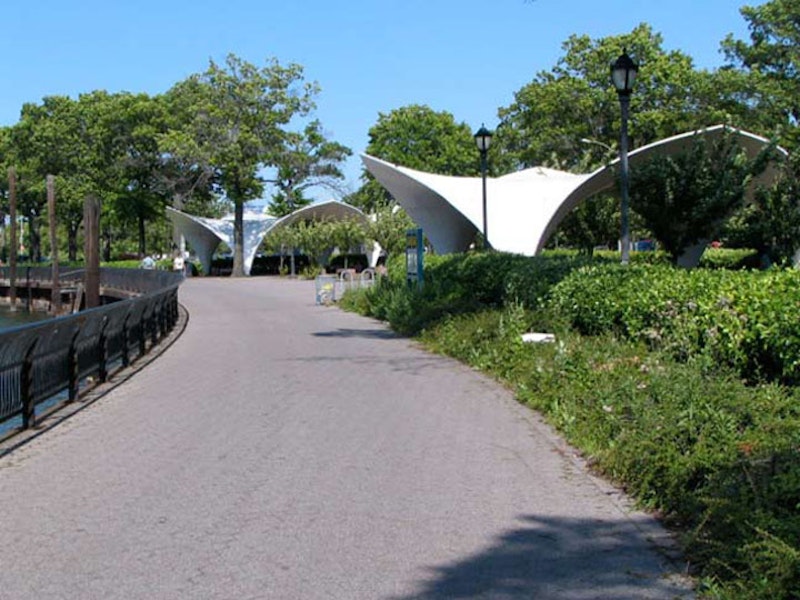 The humidity in the Northeast in the summer of 2021 has been unrelenting, it’s like South Carolina, Georgia, Florida, etc. And it’s lasted all the way into late-September. Nevertheless I’ve been at it more than ever, walking, bicycling, though my next gym visit will be my first. If I had to go to a gym three times a week, it’d be like a prison sentence. Between November and March I’m by a hot radiator, though I do a fair share of walking—I don’t like the cold wind in my face, my eyes drip like a tap.

I thought I’d head from the Citifield area up to East Elmhurst, Jackson Heights and then to Woodside. After seven miles in dead-horse humidity, I ended up at 61st St. where I caught an LIRR train back home, but not before a burger and fries at Ottomanelli’s on Woodside Ave., among the borough’s best. 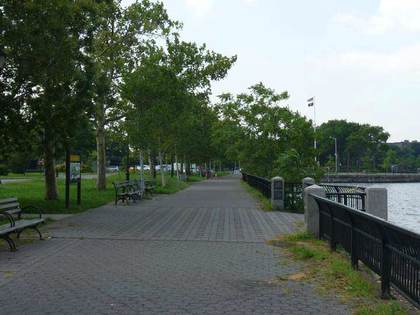 The Flushing Bay Promenade is rather new, stretching along the by north of Citifield and east of the Grand Central Parkway. The Parks Department webpage says it was conceived in the 1980s. My visits here have been infrequent and there’s a reason for that. Coming north from the Iron Triangle, the grouping of auto repair shops east of 126th St., it’s relatively inaccessible, cut off by an iron fence at Northern Blvd. I had to walk along traffic before finding an opening to grant me entry.

The fenceposts are interesting, arranged by alphabet with flora and fauna species, two alphabet letters per post designed by Gregg LeFevre. You can play a game with the kids: see if they can guess the plant and animal species at the next post as you walk along the promenade. “Queen bee” is a copout, though, they could have used quagga. 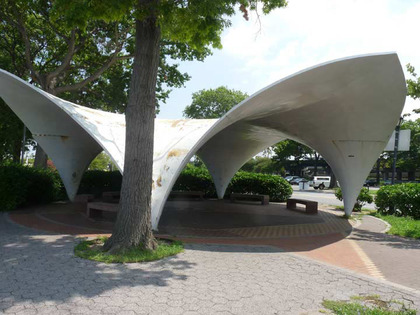 There are a pair of strange-looking rain shelters in the promenade that look like Sister Bertrille’s hat in The Flying Nun 1960s TV show. You may have heard of these as the “Candela structures” since the Parks Department named them for Spanish architect Felix Candela, who worked in waterside projects. However, they were originally designed for the 1964-65 World’s Fair.

The shelters were researched by Paul Lukas, a former New York Press columnist and pro sports uniform aficionado on his Uni Watch site (and much earlier, the Beer Frame zine and Inconspicuous Consumption site which, among many other things, helped inspire Forgotten New York) and architect Kirsten Hively. 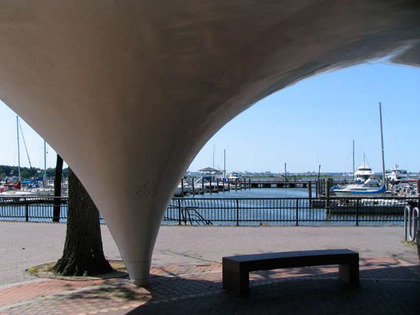 There were originally three such structures placed aside the World’s Fair Marina, designed by architect Peter Schladermundt, who’s also responsible for the nearby World’s Fair Marina, which appeared in its present configuration in 1964. They were originally exhibit spaces for riparian entities such as the United States Coast Guard, and had glass exteriors and sliding doors. After the Fair, all three were auctioned off to various bidders, one of which moved his “structure” to the Adirondacks. The other winning bidder only wanted the glass walls and left what were now reduced to shelters without the walls in place, where they sit today.

You may have heard of these as the “Candela structures” since the Parks Department named them for Spanish architect Felix Candela, who worked in waterside projects, and it’s likely that Schladermundt was inspired greatly by Candela—there’s a close resemblance. But Candela didn’t design the shelters.

Schladermundt [pronounced SHLAH-der-munt] Structures is a mouthful; the “Candela Structures” name has more or less stuck—it’s easier to pronounce and spell. They are true World’s Fair remnants, so see them while you can. There’s no immediate plan to tear them down, but developers are rapacious.